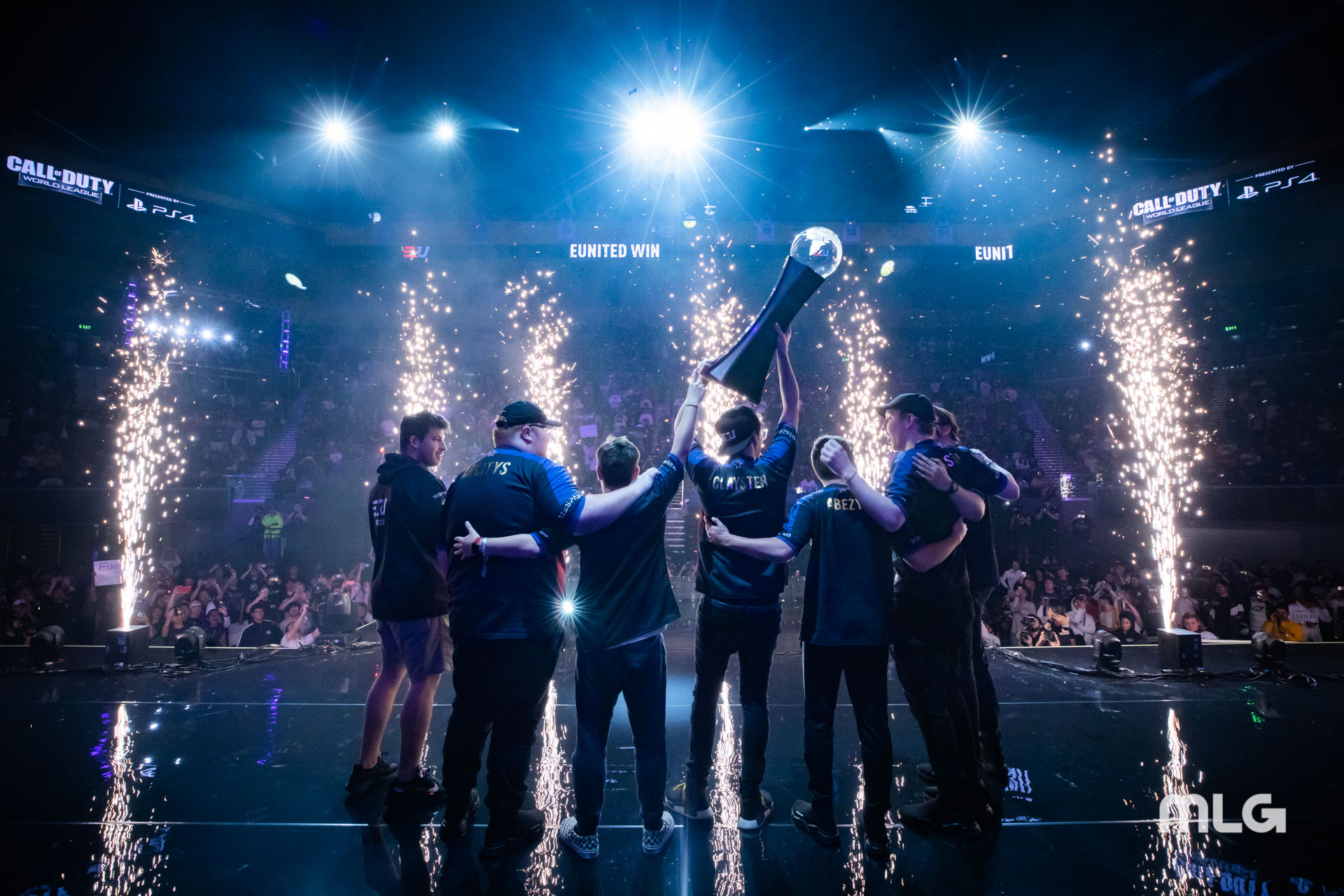 A CWL Championship to Remember as eUnited are Crowned World Champions!

In an unforgettable five-day event, eUnited cemented an instant esport classic tournament by securing their first ever CWL World Championship.

The 2019 Call of Duty® World League Championship, presented by PlayStation®4, gave attendees five days of incredible Call of Duty action, and instantly put itself in the running for one of the esports’ most memorable tournaments of all-time.

“This was the most difficult tournament ever in Call of Duty history to win, the amount of competition was simply bigger and better than ever before, and therefore, I see winning this event as the biggest achievement to earn in Call of Duty history. This is the best event, hands down,” said Caster Miles “Momo” Whitfield.

It was an event you simply could not have missed, but in case you did, here’s what happened: 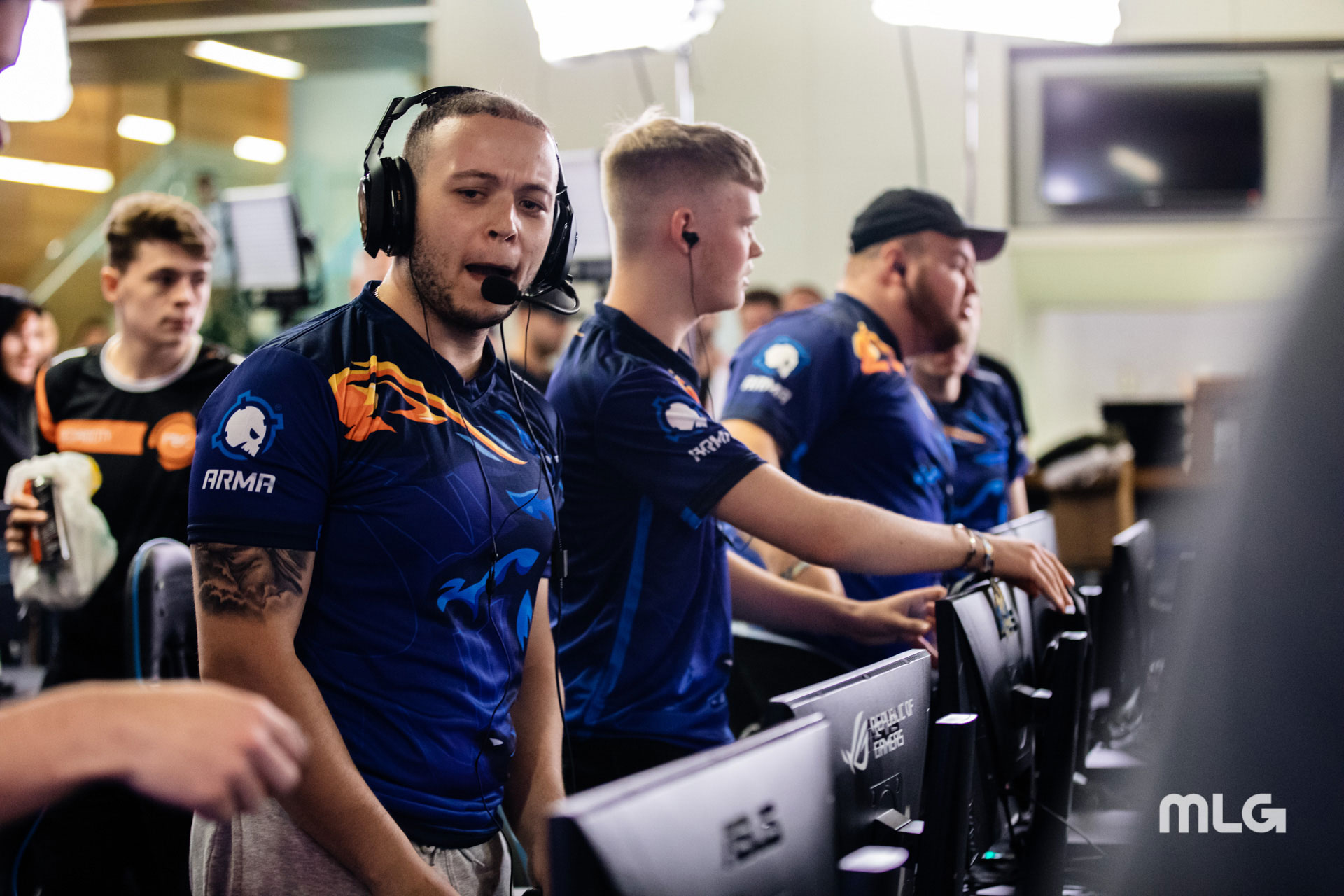 On Wednesday, August 14 at 10 a.m., Gen.G entered the CWL Championship as the runners-up to the CWL Pro League title.

In a shocking Group Play stage, Gen.G found themselves out of the tournament after losing back-to-back games to amateur squad Fuego Gaming and fellow Pro League opponent Enigma6 Group.

One of the most shocking results in CWL Champs history: @GenG can no longer finish top 2 in their pool with losses to Fuego Gaming and Team WaR.

It was, officially, the biggest collapse in CWL history, as Gen.G were the highest seeded team to not make the Championship Bracket.

That was not the only surprising early Champs upset; later in the Championship bracket, the likes of Splyce and Team Envy were the upset fodder for two hungry underdog European squads.

Splyce lost in Winners Round 1 to Evil Geniuses, then fell to Team WaR, a team that barreled through the MTN DEW® AMP® GAME FUEL® Open Bracket at the CWL Finals, in the first Losers Round.

Within the same hour, three defending World Champions on Team Envy lost their chance to win back-to-back titles. The first-round losers to Units, an unsigned European Pro League team, Team Envy simply could not keep up with Team Singularity, a mix of talent under 21-years-old who played well beyond their years. 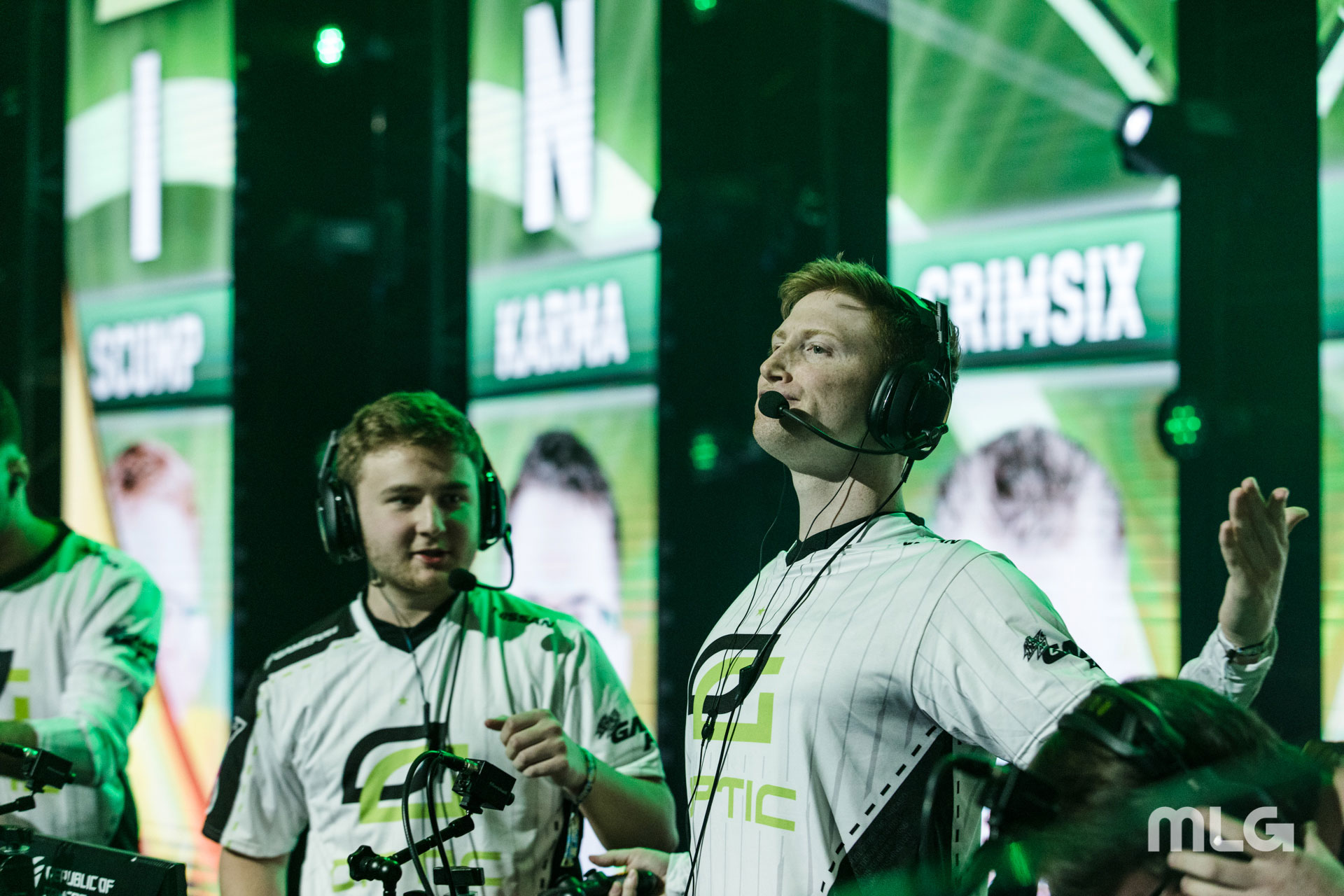 A Feature-Length Highlight Reel of a Weekend

This year’s CWL Championship had no shortage of incredible plays even before the confetti fell on Sunday.

Although they would eventually lose this series, Team Envy kicked off bracket play on Friday with a nail-biting 250-249 victory in Hardpoint on Gridlock.

Joining Team Envy in the Losers Bracket early were FaZe Clan and 100 Thieves, two pre-tournament favorites to win, with the latter falling to Luminosity Gaming in dramatic fashion.

WHAT A MATCH!!! 👏👏👏@Luminosity take a Hardpoint for the ages and send @100Thieves down to Losers at CWL Champs!#CWLPS4 | #CWLChamps pic.twitter.com/0gwjytGilk

In the hotly anticipated Losers Bracket matchup, it appeared that FaZe Clan might have swept two-time CWL Cup Champions, as 100 Thieves were on the ropes down 2-0 in the series and 2-0 in the game three Control…

But the Thieves wound up stealing the match.

😰 @100Thieves pull it OUT!!! They take the Control and extend the series one more map against @FaZeClan.

After engineering a game three come-from-behind victory, 100 Thieves forced a Game 5 S&D on Arsenal and completed a reverse sweep to send the late Friday crowd wild.

… followed by a Game Five S&D victory that saw Clayster wish his former teammate well in the Losers Bracket.

👋👋👋 @Clayster @eUnited get it done in five to send @EvilGeniuses down to the Losers Bracket at CWL Champs!#CWLPS4 | #CWLChamps pic.twitter.com/p7tRKZLwls

The next main stage match saw a breathtaking minute of play from OpTic Gaming as they faced Enigma6 Group; in the opening Hardpoint on Seaside, Brandon “Dashy” O’Tell whipped the crowd into a frenzy over a full team wipe…

… and then, seconds later, Thomas “TJHaly” HaLy kept them all entertained with an astonishing play.

OpTic eventually won this series 3-1, which propelled them into the Winners Finals.

Later that day, eUnited became OpTic’s opponent by beating Units in a series defined by one man: Chris “Simp” Lehr. In what can only be described as a masterclass in S&D, Simp tore Units down in Round 2…

… and ended the game with an incredible triple feed with his sniper. 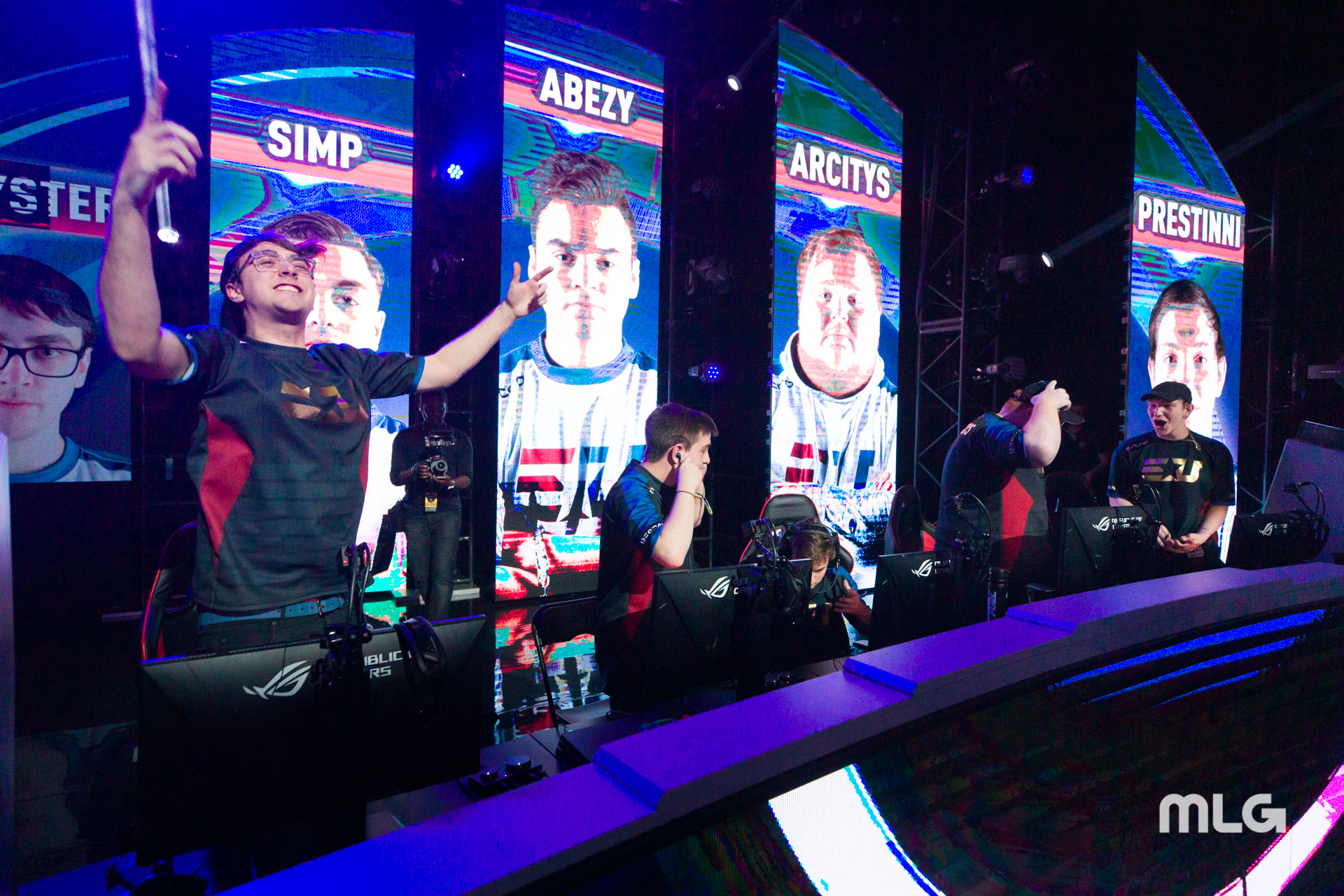 On Championship Sunday, they Stood (e)United

In a battle of the CWL Las Vegas Open and CWL Pro League Champions, OpTic Gaming fell to eUnited 3-1. However, the series that sent eUnited into the Grand Finals was not an easy victory, as their coach, Brice “Faccento” Faccento, explained.

“During the first map, we were frantic and uneasy, and we got off to a slow start,” said Coach Faccento. “But during the Search, when we were down 5-3, we had nothing to lose then and settled down naturally. We just started rolling after that.”

eUnited’s victory cut OpTic Gaming deep, and 100 Thieves, who continued an immaculate Losers Bracket run, were in the Losers Finals ready to sweep them out of the tournament.

100 Thieves complete their Losers Bracket run and book a ticket to the Grand Final vs @eUnited!#CWLPS4 | #CWLChamps pic.twitter.com/TELkQCuqmU

The Grand Finals stage was then set: the dominate CWL Pro League champions eUnited were to face 100 Thieves, a team that dispatched six straight opponents in the Losers Bracket.

Both titans traded blows and map wins all the way to the game five S&D on Arsenal. With eUnited up 5-4 in Round 10, the Wonder Twins, Preston “Prestinni” and Alex “Arcitys” Sanderson, ended the game and won the organization their first ever Call of Duty World League Championship.

“Me and him have been playing for years now,” Arcitys said of his brother, “and me, him and Clay all know what we want to do in S&D, plus I think I’m good at clutch situations. I try to help my team as much as possible, and Preston strives in those situations where I help him as much as possible.”

Following the coronation ceremony, Simp was named the Astro Gaming MVP, and for him, it was a long time coming.

As for Clayster, the now two-time World Champion, he couldn’t be prouder seeing the Twins – Arcitys and Prestinni – and “Tiny Terrors” – Simp and Tyler “aBeZy” Pharris – grow into the champions they are today.

“It’s really heartwarming to me – and I’m proud of myself, obviously – but I’m even more proud of them in the way they have grown as people, as teammates, and players,” Clayster said. “I’m proud of the growth; I’m proud of where we grew as a team, the battles and struggles we fought through to come out on top with back-to-back wins.”

Congratulations to eUnited – James “Clayster” Eubanks, Preston “Prestinni” Sanderson, Alex “Arcitys” Sanderson, Tyler “aBeZy” Pharris, Astro Gaming MVP Chris “Simp” Lehr, and Coach Brice “Faccento” Faccento – for winning the 2019 CWL Championship and thank you to all teams who participated in this unforgettable event. We’d also like to thank the fans who tuned into the 2019 CWL season’s grand finale from around the world and those who watched it live in Los Angeles.