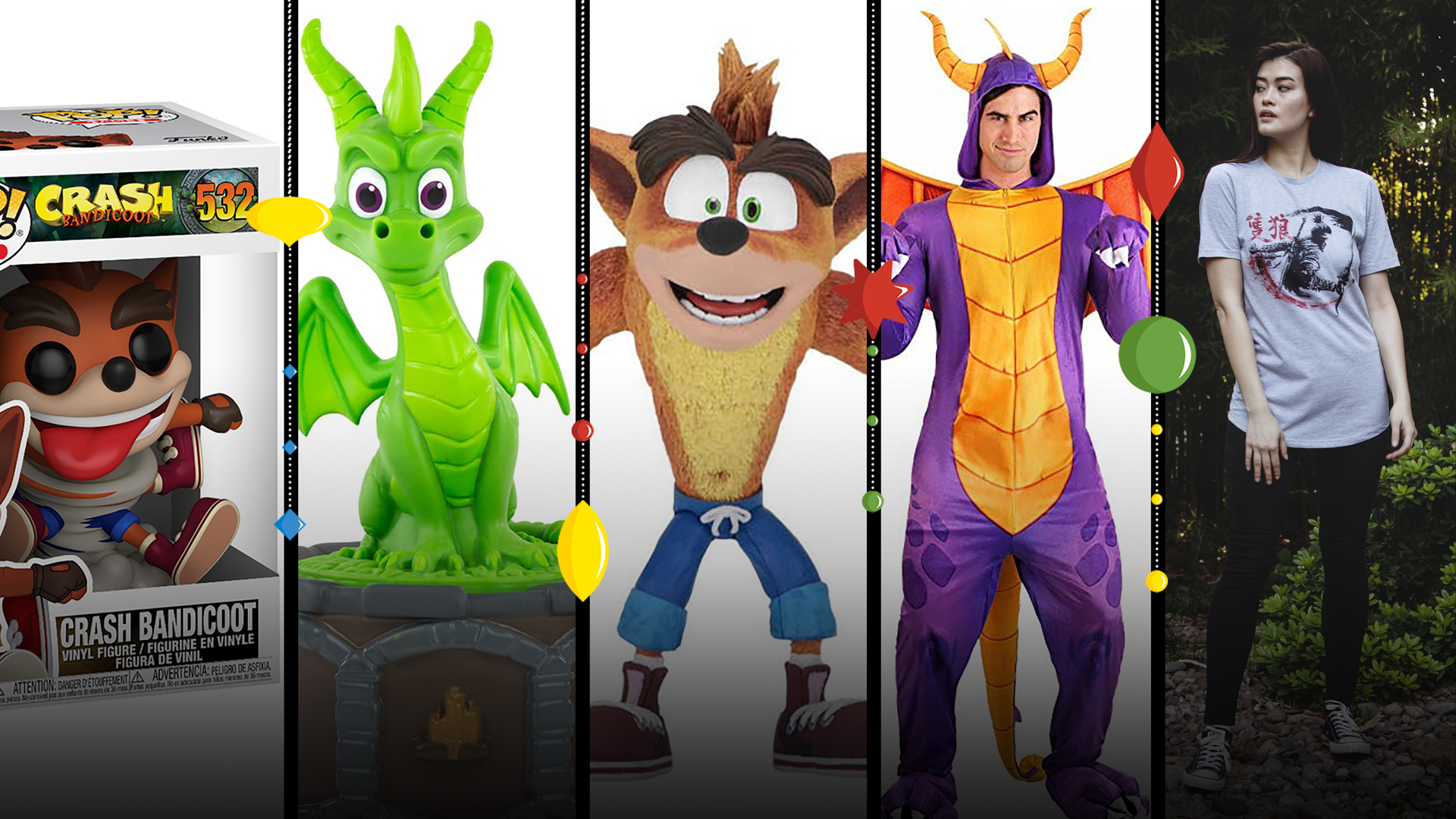 The Holidays are upon us, and now’s the perfect time to take a moment, and pick out a present for yourself, a friend, or a family member. If you’re a fan of Crash Bandicoot™, Spyro™ the Dragon, or Sekiro™: Shadows Die Twice, we’ve made a list of gifts, checked them twice, and provided links to purchase so you can get your Holiday shopping out of the way early and easily!

Are you wanting some great gifts for Call of Duty®: Modern Warfare®? Then don’t be left in the dark: Check the Related Articles section at the bottom of this post for more information.

Starting on December 20, there are some limited-time savings to be had!

Save up to 40% off the SRP (Suggested Retail Price) of the digital edition of The Game Awards Best Sport/Racing Game of the Year: Crash Team Racing Nitro-Fueled. Go here for more information.

There's also up to 40% off SRP of the PlayStation 4 and Xbox One versions of the Crash Bandicoot N. Sane Trilogy, Spyro the Dragon and Crash Team Racing Nitro-Fueled bundle! Go here for more information.

Finally, save up to 35% off the SRP of The Game Awards Game of the Year: Sekiro: Shadows Die Twice on PS4, Xbox One, and PC. Go here for more information. 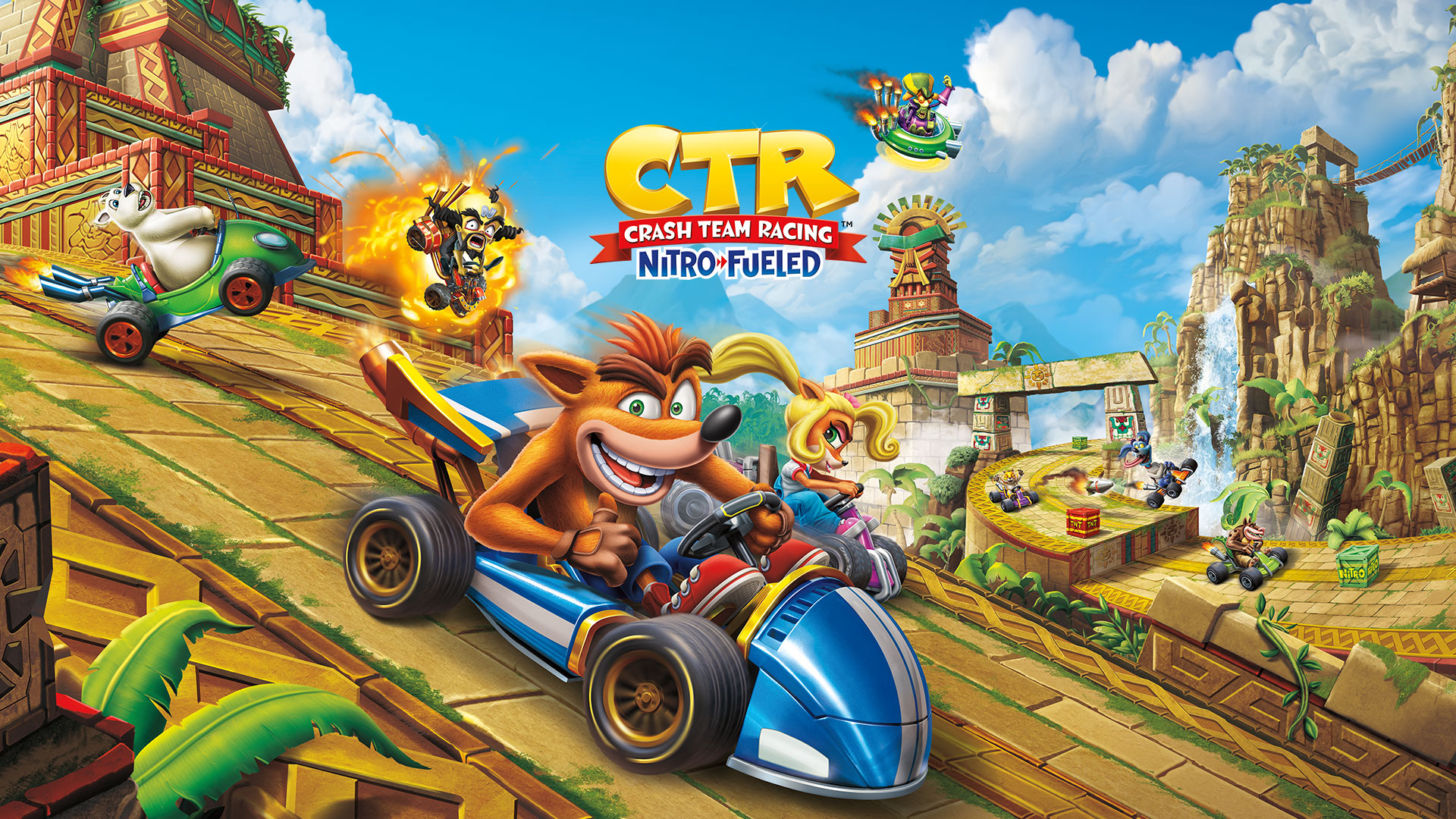 Now is the best time to rev up your engine and go “fur” throttle by purchasing one of the editions of the game! Simply go here, click on your gaming platform of choice (PlayStation® 4, Xbox One®, or Nintendo Switch®), and select your game from the following options: 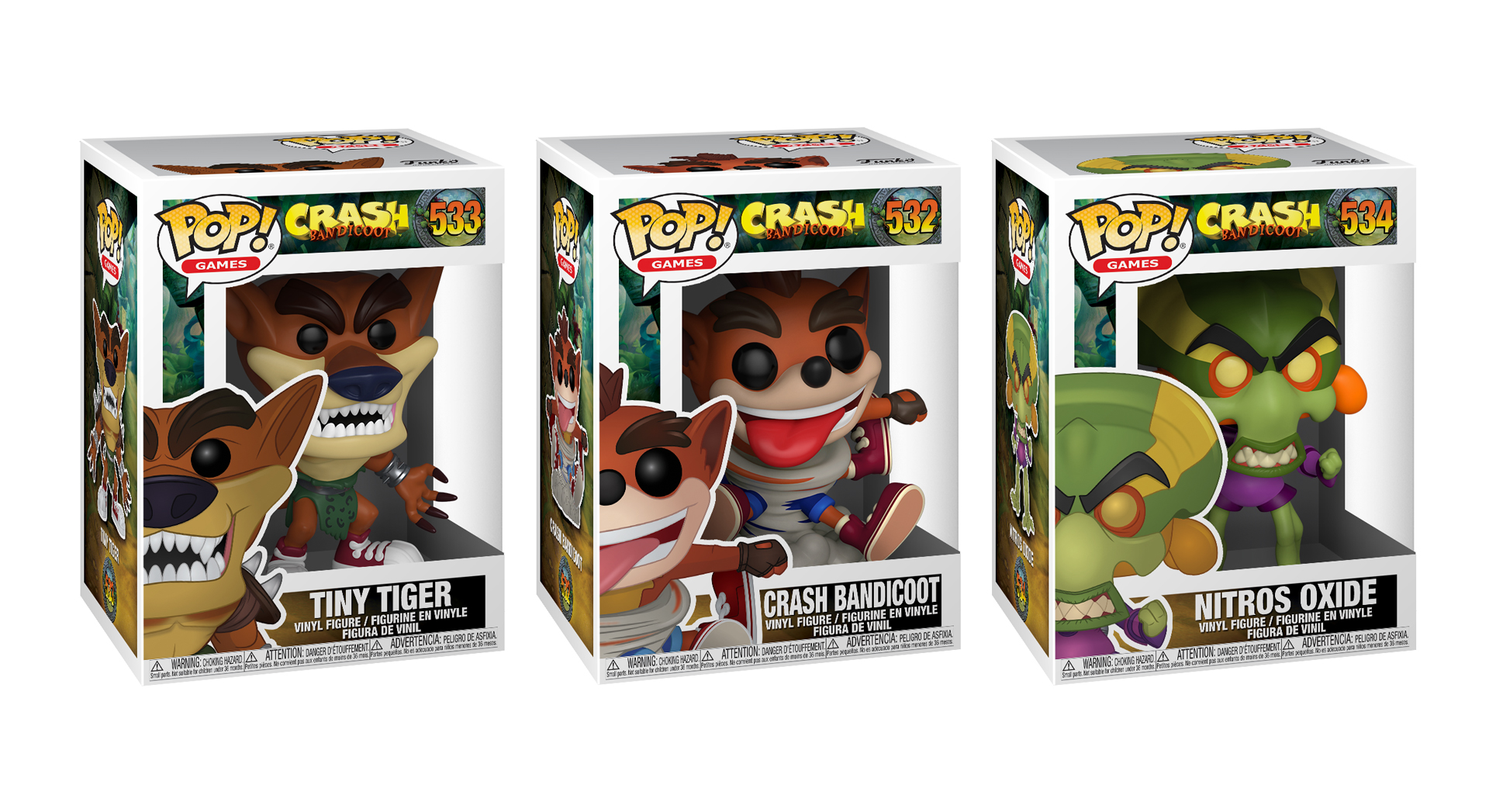 Pop! Figures: Funko has a variety of cool Crash Bandicoot figures to collect, including Pop! Crash himself, Pop! Tiny Tiger, and Pop! Nitros Oxide: Each of these have an MSRP of $9.99, and you can buy them from Funko right HERE!

Pop! Ride Figure: Why not take Crash Bandicoot out for a spin, as a stylized pop ride from Funko?

Mystery Minis: Turn your house into the Adventure Area from Crash Team Racing Nitro-Fueled! These Funko Mystery Minis feature the racers on their karts, and include Coco, Neo Cortex, Nitros Oxide, Polar, Riper Roo, and Crash Bandicoot. Which one will you get? It’s a surprise!

Pop! PEZ Dispenser: Check out this great stocking-stuffer; a PEZ Crash Bandicoot dispenser for under $3! 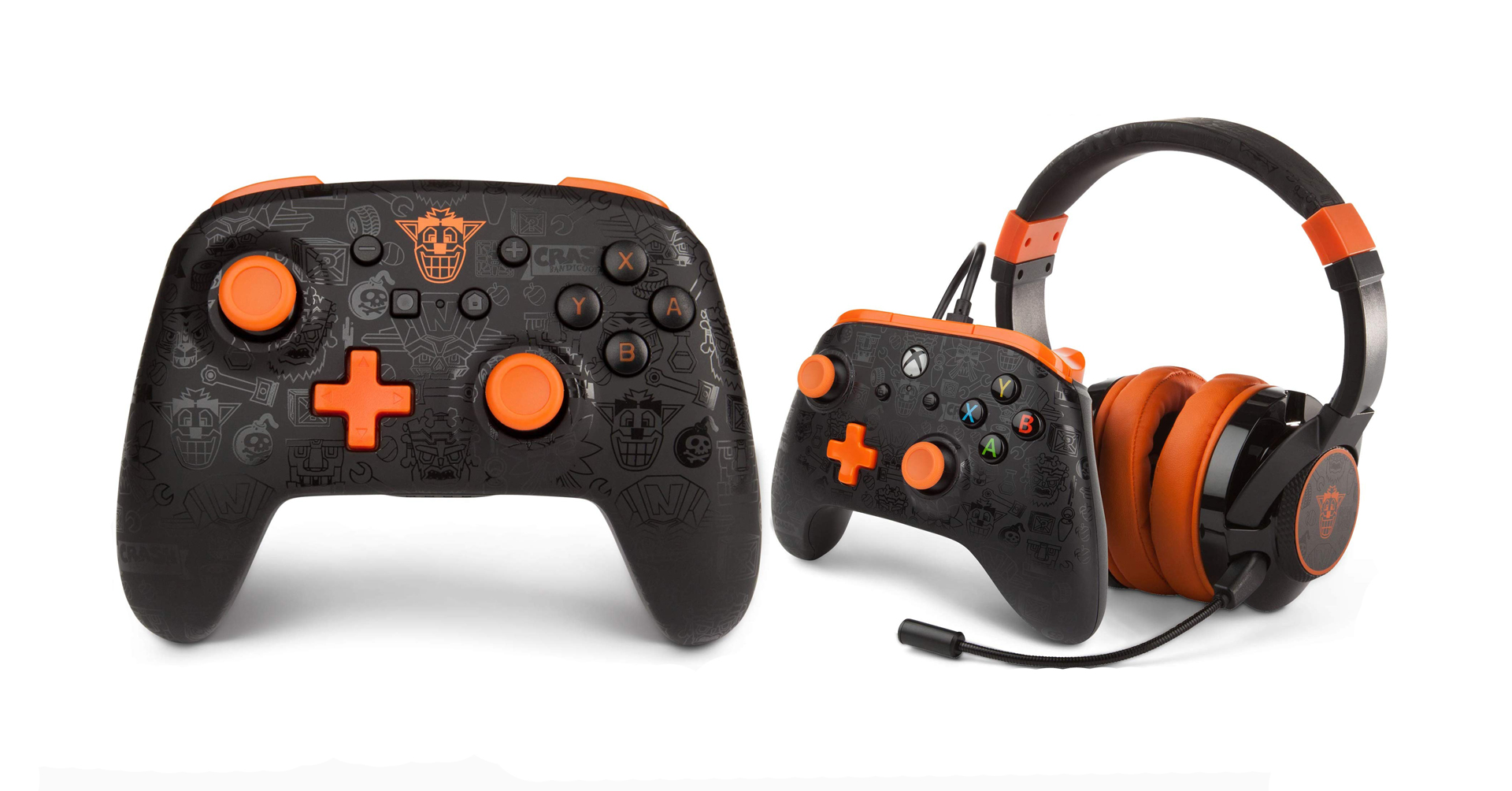 If you’re after a cool and colorful way to play Crash Team Racing Nitro-Fueled, why not take to the tracks with one of the PowerA controllers or headset?

Need some cool and crazy apparel, accessories, and even homeware items emblazoned with your favorite orange bandicoot? Then venture to the Numskull web site and check out their wares! Highlights include:

Drink like a champion with this great collectible, based on the winnable trophy from the game. Display it proudly, or sip your favorite wumpa juice from it (wumpa juice not available).

Start your engines and hit the racing tracks or the real world wearing this racing-inspired, premium quality hoodie, featuring Crash Bandicoot designs on the sleeves.

Prove your Crash Team Racing fandom with this set of official pin badges housed in an awesome fold-out toolbox display case! With 11 pins featuring Crash, Coco, Neo Cortex and more, as well as iconic items and emblems from the game.

We’ve picked three of the coolest T-shirts available for fans of Crash Team Racing Nitro-Fueled, so you’ve got something iconic to wear next time you’re down at the track!

One of the most popular tracks from the game is Crash Cove, and this t-shirt celebrates this epic track, featuring the Dr. Neo Cortex-shaped skull tunnel with Crash approaching in his kart.

Rock this new tee, impress your friends, and display your favorite marsupial, who’s back and running strong!

Featuring Crash dashing along in his kart, this distressed Crash Team Racing graphic will definitely give your closet a boost!

If you’re looking for an action figure that’s orange, wide-eyed, and with plenty of articulation for maximum wumps, then we’ve got you covered! Purchase any of the following, exclusively at GameStop:

Crash is back, enhanced, entranced, and ready to dance! Pick him up in new Phunny plush form!

Needing a plush Crash, but wanting his eyes to be just a little bit more crazy? We thought you did!

This 5.5 inch tall Crash figure features a unique head sculpt, plenty of articulation, and he’s outfitted with ball-jointed eyebrows to create a variety of crazy expressions! 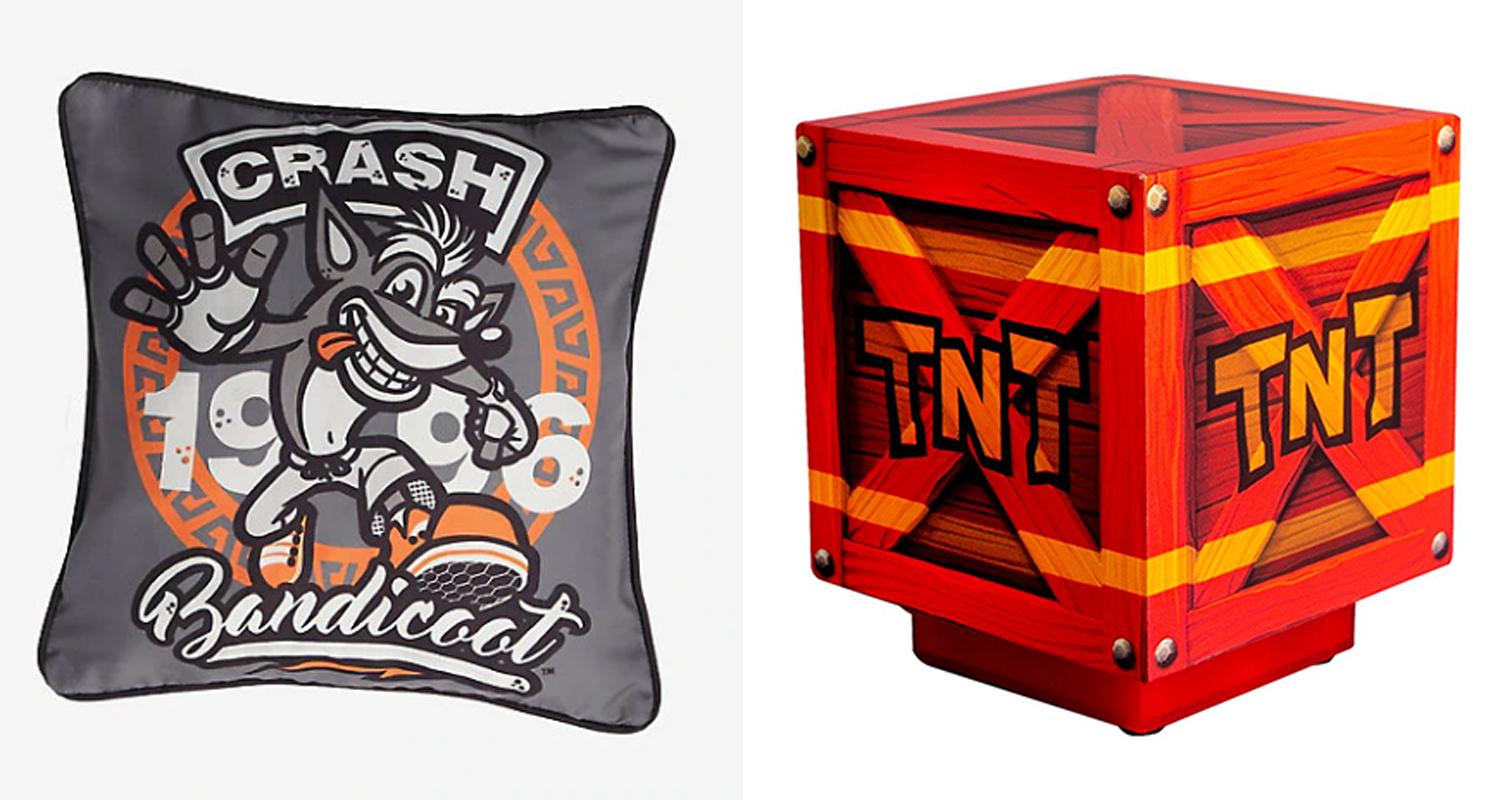 If you’re after something a bit more weird, wacky, or wonderful, then definitely check out the following two curated items!

Whoa! This gray and orange cover is perfect to dress any decorative pillow, and features Crash in greyscale with a pop of orange and “1996” along with “Crash Bandicoot” text design. It measures 15”x15”.

MSRP $28.90 | Made by Paladone Products | Purchase from GameStop

Although Crash Bandicoot doesn’t typically want to cross paths with a TNT crates, this TNT light is a different story. This four-inch tall light is shaped like a TNT crate, and when the battery-operated light is turned on, exploding sounds from the game start to play! 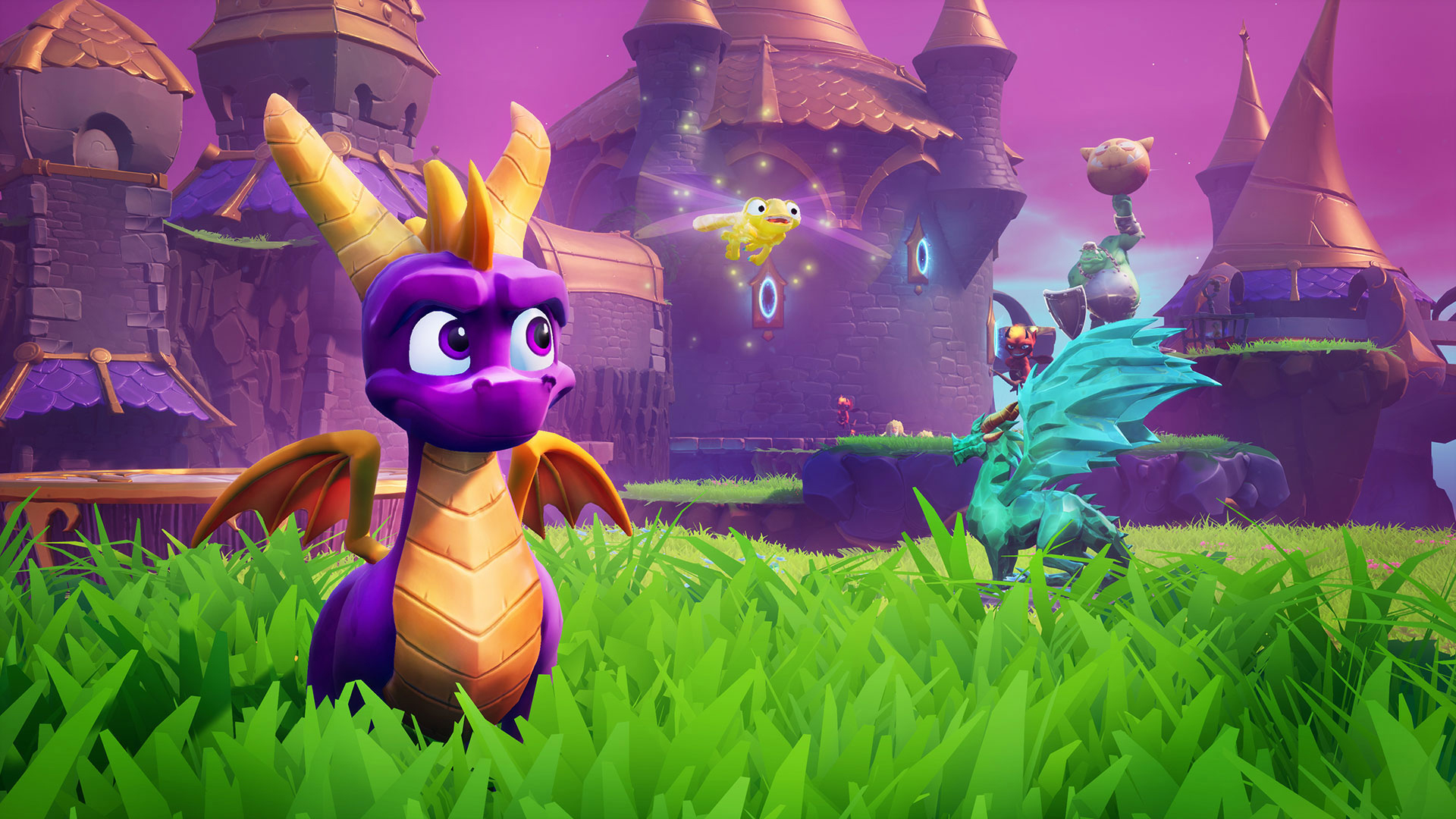 Bring the heat and hide your sheep! The Spyro™ Reignited Trilogy is out now!

Head here, click on your gaming platform of choice (PlayStation® 4, Xbox One, Nintendo Switch® or PC), and purchase the game! 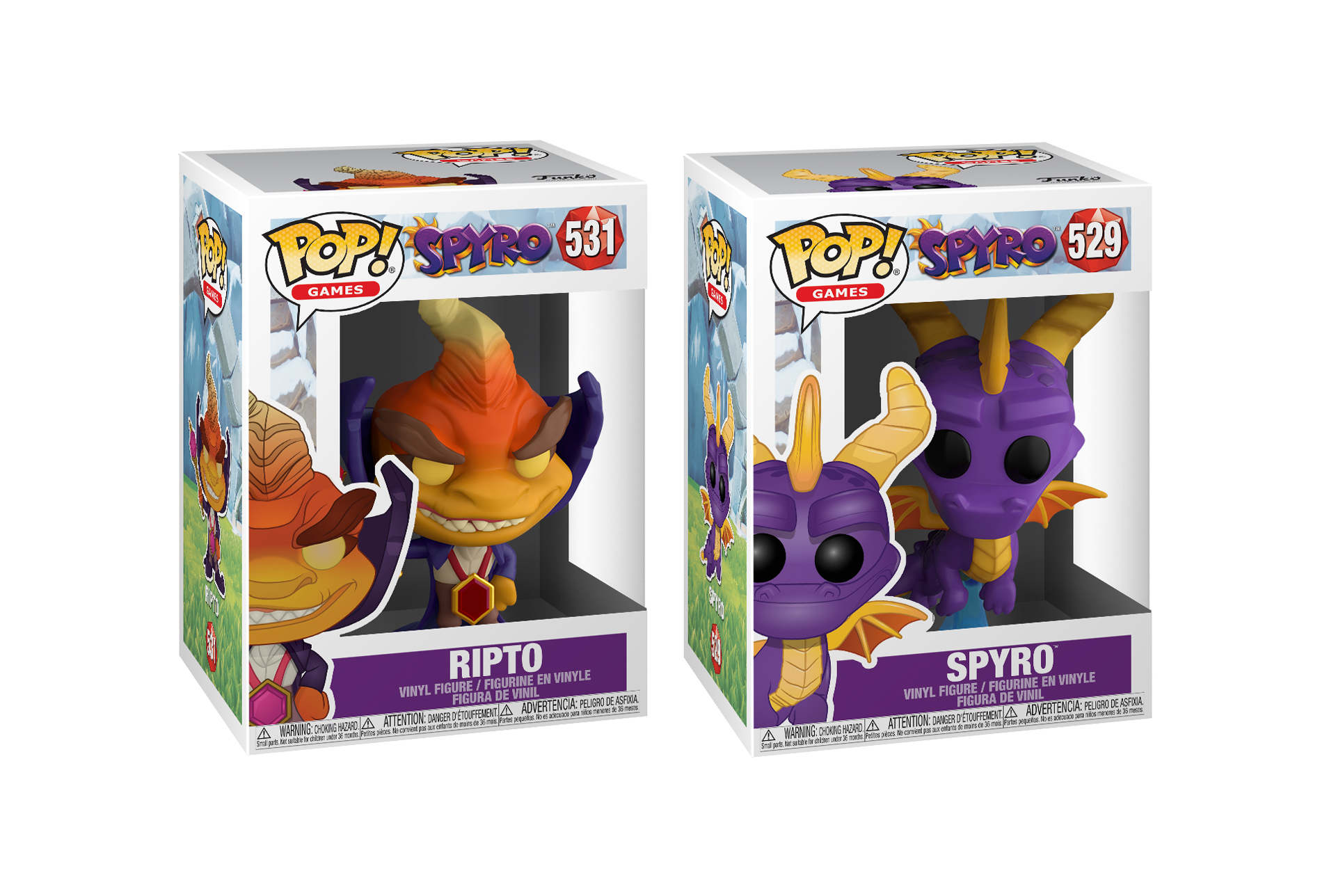 Pop! Figures: Funko has a number of top-notch Spyro figures to collect, including the Pop! Spyro himself, as well as Ripto and Gnasty Gnorc! Each of these have an MSRP of $9.99, and you can buy them from Funko by clicking HERE!

Pop! PEZ Dispenser: Need a cool little present and candy storage device? Why not grab a PEZ Spyro dispenser for under $5!

If you’re a Nintendo Switch player, there are two Spyro-themed pieces of gaming equipment: Glide over to Amazon and purchase the PowerA controller or headset!

This includes wireless freedom using Bluetooth 5.0 and features motion controls and advanced gaming buttons, LEDs for player number, button mapping and low battery warning, comes with two AA batteries for up to 30 hours of gameplay, and comes in a stylish “Spyro” color!

This includes earbuds with inline mic, a screen protector with applicator, and a custom cleaning cloth. The case has zippered soft outer shell that perfectly fits the Console in handheld mode. The internal felt lining features storage for 10 game cards, a mesh storage pocket for earbuds and cables, and a built in play stand for tabletop mode, along with a cool Spyro design throughout!

Pick it up Here. 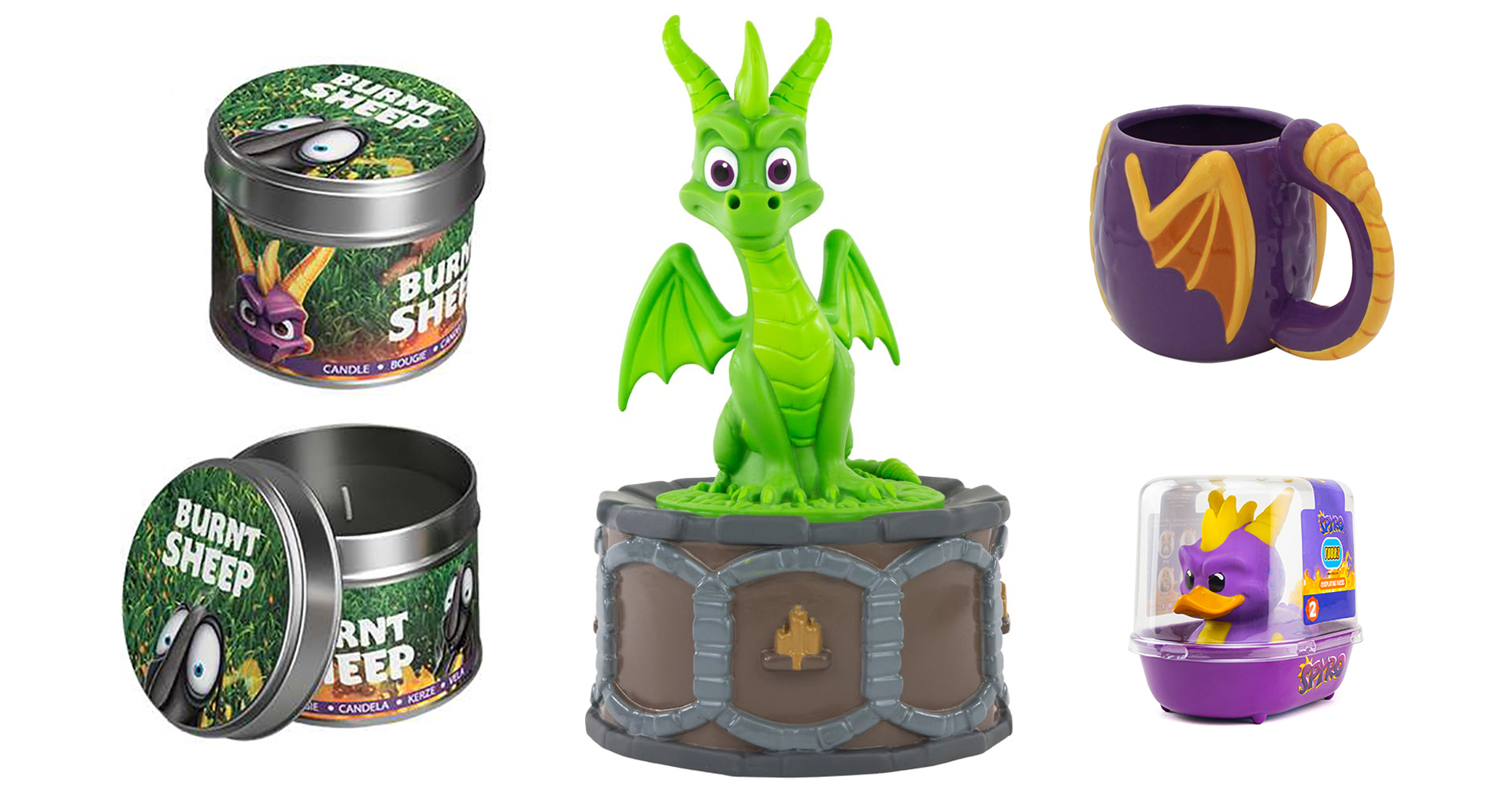 Can’t get enough of your favorite purple dragon? Then visit the Numskull web site, and view their collection of official Spyro items! We’ve highlighted some of them below:

Want Spyro all feathered up and ready to ignite? Spyro (and friends) now come to life as cosplaying ducks; collect all four from Spyro! Approximately 3.54” tall (9 cm); choose from Spyro, Ripto, Elora, and Moneybags!

The initial Spyro the Dragon incense burner was a massive hit, so this limited edition green variant should get you fired up all over gain! Based on the color variant cheat from the Spyro Reignited Trilogy, this can be used as a display ornament, or as an incense burner which blows smoke out of its nostrils!

Ever wondered what the smell of burnt sheep from the original Spyro game smelled like? Well wonder no more! The delicate aroma needs to be sniffed to be believed! This has in all actuality, a pleasing smoky scent. However, if you aren’t brave enough to try the Burnt Sheep Candle, there’s always the “Toasty Pumpkin” variant!

Lap up the flames with this 3D novelty mug, based on the body of Spyro himself, and featuring wing and scale details, a tail handle, and chest plate. Perfect for drinking from, or displaying as a collector’s item. No dragons were harmed in the making of this item.

We’ve picked three of the coolest apparel items available for fans of Spyro, so you’ve got something fashionable (or at least, eye-catching) to wear!

Get in the festive mood with this 100% knitted “ugly” sweater; the perfect item for Spyro enthusiasts! Check the website for two different designs.

Spyro “No Sheep Were Harmed” T-Shirt

Spyro fans should remember this classic line from the credits of the original game, so we decided to make an official T-shirt, featuring a burnt sheep from Spyro Reignited Trilogy!

If you’re looking for Spyro casual wear, this 100% high quality cotton T-shirt with 3/4 length sleeves might do the trick, and comes with an original Spyro design that references antagonist Gnasty Gnorc. A must-have clothing item for Spyro super fans!

If you’re looking at your closet and thinking it might be time to change up your get-up, may we recommend an authentic, adult-sized horned and hooded purple onesie with a pair of shoe covers and wings? You’ll be the talk of your next board meeting! 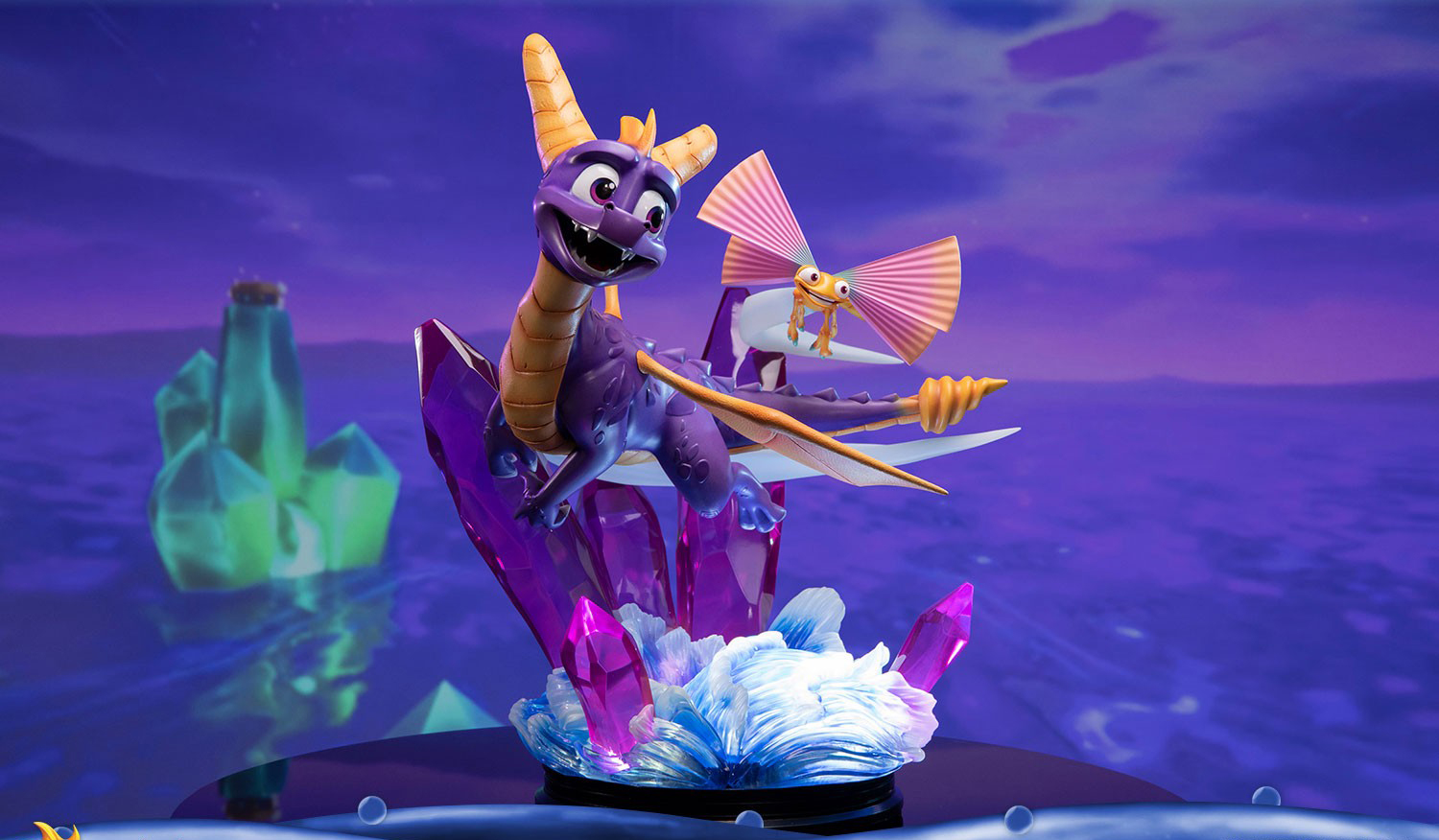 Featuring incredible detail, meticulous construction, and wonderful sculpting, First4Figures has crafted a number of amazing painted statues, ranging from the Spyro PVC for $99, the Spyro Reignited Exclusive Edition (for $424.99), and even the Crystal Dragon itself (for $899.99)! 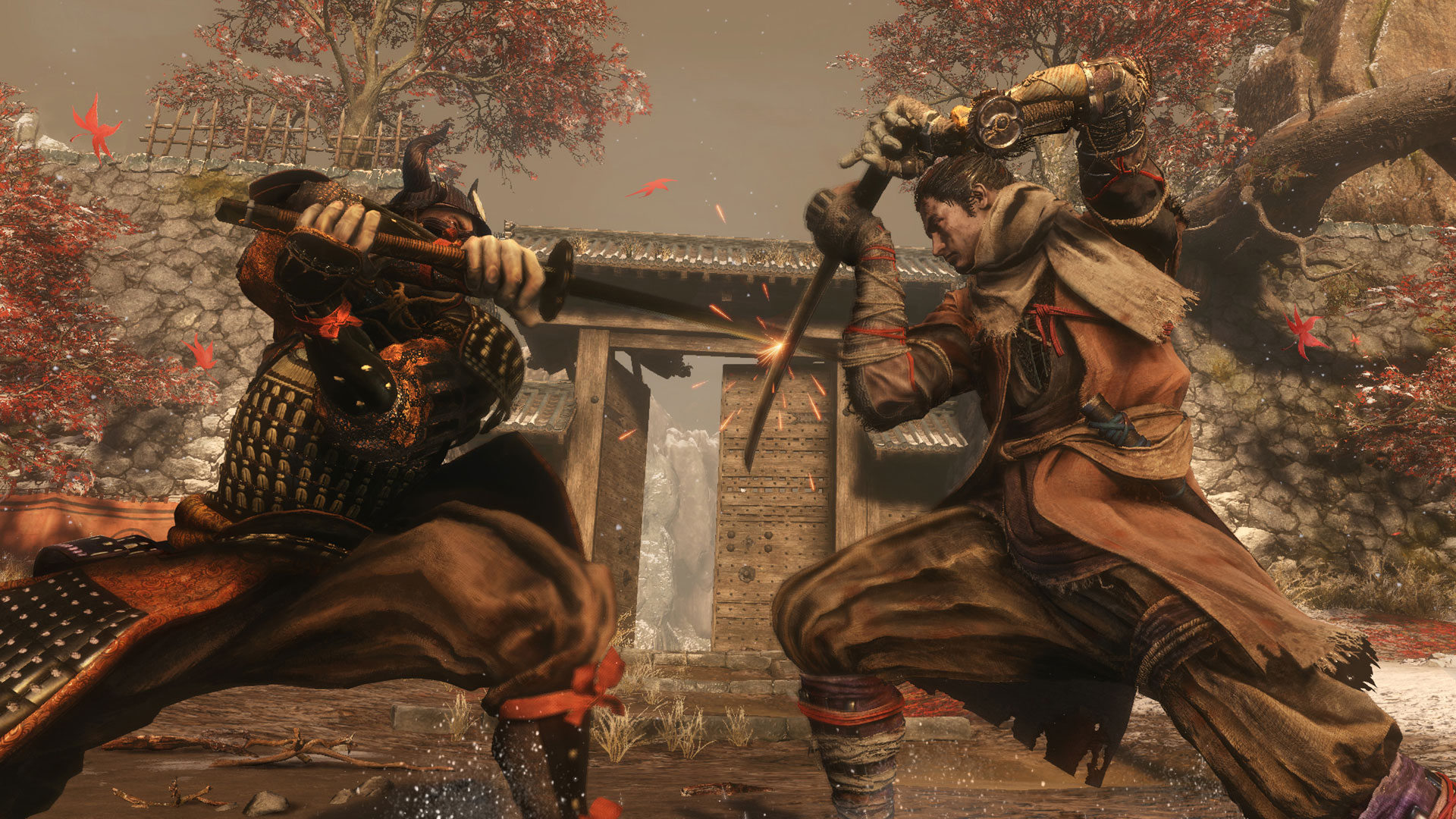 Carve your own clever path to vengeance in this critically acclaimed experience from developer FromSoftware! Head here, click on your gaming platform of choice (PlayStation® 4, Xbox One®, or PC), and select your game from the following options:

This edition grants you a copy of the game. 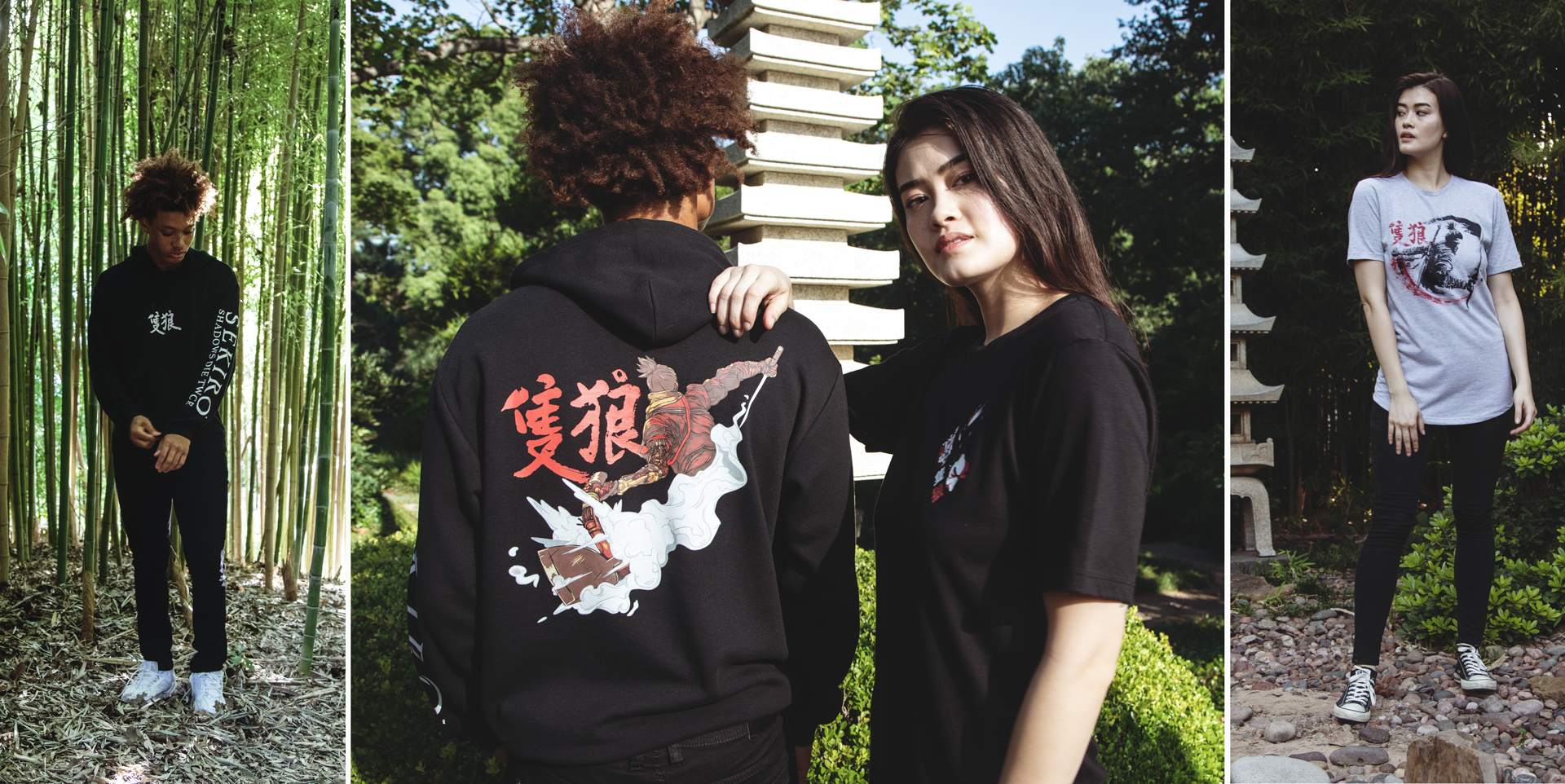 Live by the sword with the official Sekiro: Shadows Die Twice apparel collection, honoring the supernatural, action-packed adventure! Choose from two different t-shirt designs, a pair of rather fetching Oni sweatpants, and the especially-impressive Wolf Hoodie! 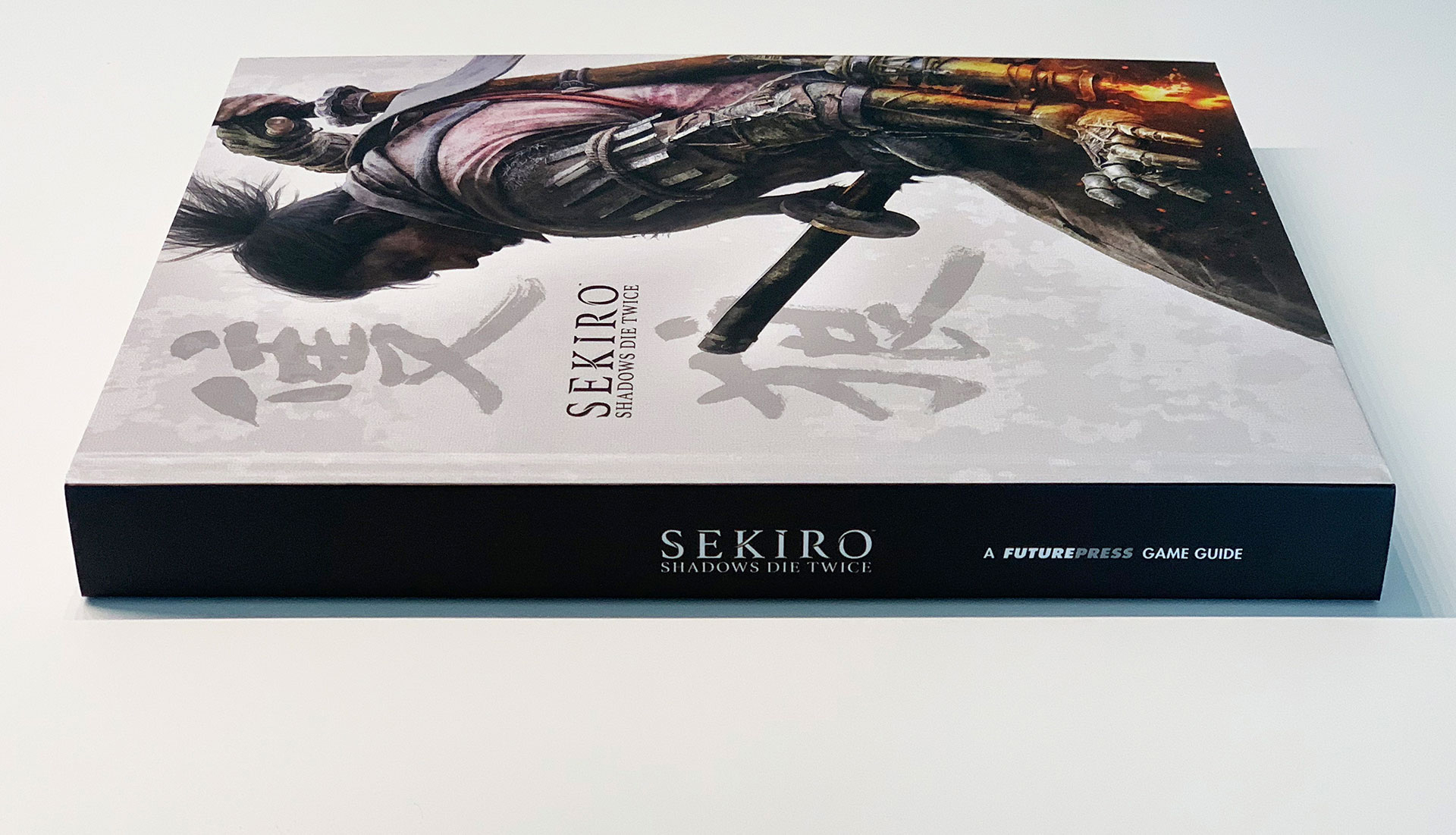 MSRP from $33.78 | Published by FuturePress | Purchase from AMAZON

Sekiro: Shadows Die Twice is a true shinobi experience--if you're not devious, patient and above all masterful, you'll almost certainly be cut down. Fear not, as Future Press have crafted a guide that makes the path to mastery clear. Sekiro's opponents are so ferocious and unyielding that defeating them in any form will take practice and dedication; beating them flawlessly requires shinobi skills that this book is designed to teach you: consider it the ultimate Esoteric Text.

The official guide is filled to bursting with combat tutorials, analysis, and overviews of the game's interconnecting mechanics. It's a veritable encyclopedia that is certain to enrich your shinobi experience. You've never faced a challenge like this before. It would be unwise to face it alone.

*Based on Suggested Retail Price. At Participating Retailers.

*** Also able to be unlocked in Standard version of the game through in-game challenges and rewards.