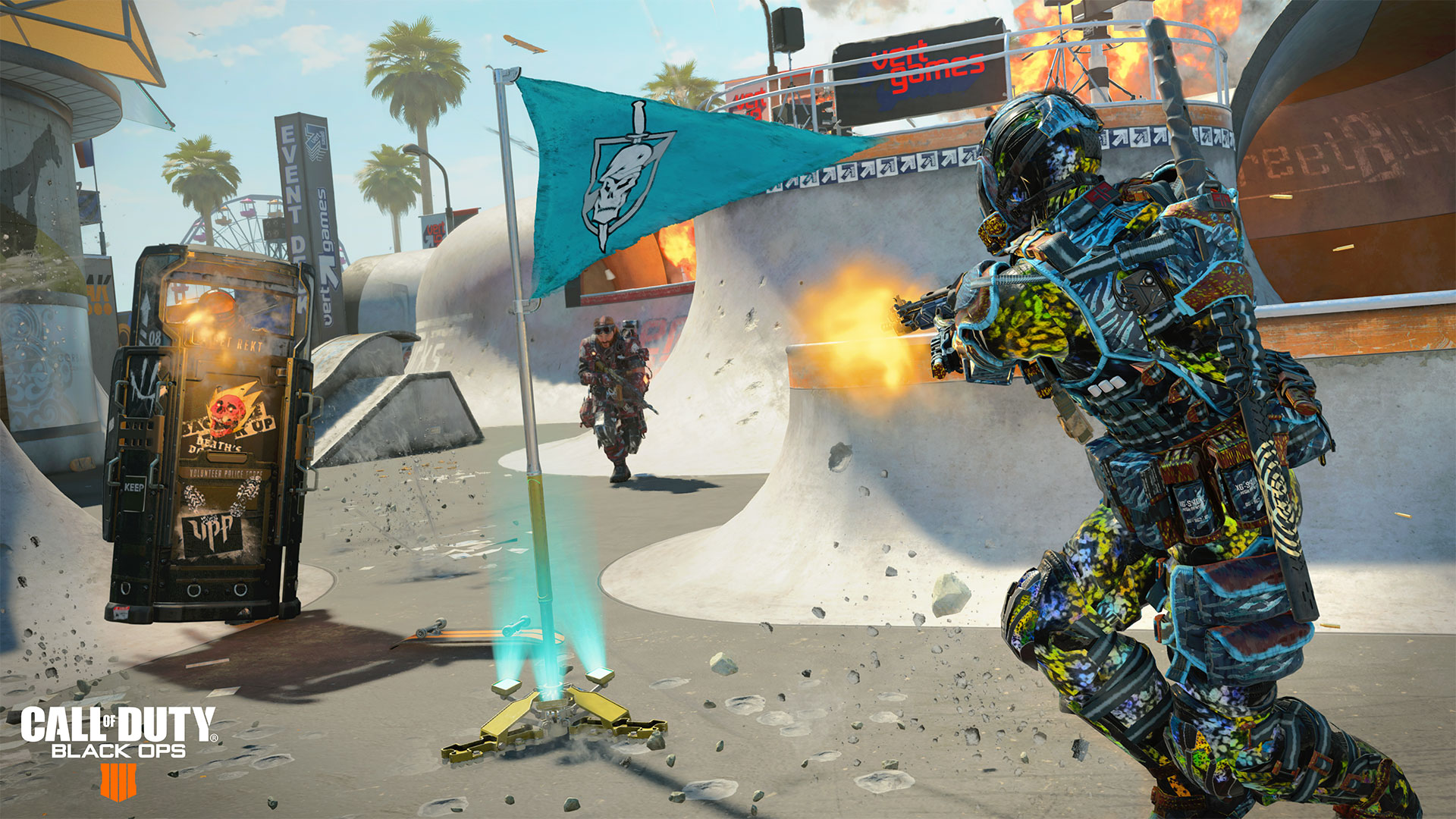 Capture the Flag is back in Call of Duty: Black Ops 4 Multiplayer!

This fast-paced game mode has the same classic rules that you might remember: Teams spawn in with a flag at their respective bases, capturing the other team’s flag awards a point etc. etc.

While we usually love to break down new game modes, CTF has been a first-person-shooter staple since the genesis of multiplayer games. However, since those days of polygonal past, we’ve come a long way in Call of Duty®, as evidenced by the advent of Specialists.

These Specialists change the way we fight and win a Capture the Flag match. With that in mind, we’ve compiled a CTF tip for each Specialist in Call of Duty: Black Ops 4:

Need an escort? With Ajax’s Ballistic Shield, a flag runner can get behind the defensive juggernaut and run one back home. His 9-Bang is also useful for attacking or defending a base with enemies lurking out of sight, waiting to pounce.

Battery’s explosives can be deadly when targeted towards an objective base. Whether it’s her War Machine or a Cluster Grenade, she can lay down enough fireworks to light up a defending team. Litter an opponent’s path with explosives to make their life difficult.

Tactical TAK-5 usage in Capture the Flag could be the difference between a winning cap or sending a game into overtime. It might be a good idea to keep a TAK-5 charged up for when a teammate runs back a flag. This provides the flag runner, along with the rest of the team, a health boost that could tip the scales for any pesky gunfights along the path back to your base.

Firebreak’s Reactor Core comes in extremely handy regardless of whether you’re attacking or defending. Popping open this nuclear core on the other side of a wall could catch a camping defender or someone chasing a flag runner, especially when flags are positioned in interior locations.

Juneau loves to defend her territory, so sticking her on your team’s flag could be a good use of her services. As for the Mesh Mines… well, you know what to do with them: set them up for defending entry points to the flag, as it could trip up an enemy or two trying to make that sneaky pull.

Both of Prophet’s abilities do the work of buying time in CTF. The Seeker Mine stuns an enemy temporarily, which could be useful when thrown at an enemy flag carrier. The Tempest, on the other hand, can be an equalizer, as it could stop an entire enemy team’s advance on a flag with a well-placed shot or two.

Play the new Multiplayer mode, Capture The Flag, now on PS4, with other platforms to follow. #BlackOps4 pic.twitter.com/3FGOZAJYpT

Like Prophet’s Tempest and Battery’s War Machine, the Sparrow can stick onto enemies and halt their advance in an instant. Where Outrider also shines above the rest is her Hawk drone. This recon vehicle can spot enemies trying to flank on an outside under-used path, provide overwatch on your team’s flag, or scout ahead of your pack to help coordinate the best plan of attack.

Providing exactly what his Specialist name is short for — reconnaissance — both of Recon’s Specialist Ability and Equipment can be used to provide intel for an offensive push or a defensive stand. Use either of these when your team isn’t sure of where an attack may come from, or where the enemy has set up defenses around their flag.

Want to fly across the map with a flag? Take Ruin’s Grapple Gun and hold onto that flag for dear life as you shoot back over to your base. His Grav Slams are also a great area-of-effect tool that can be used near bases to clear out team fights.

Two words: Tac-Deploy placement. Choosing Seraph gives you the crucial responsibility of placing down these beacons. Put the Tac-Deploy in areas close to the other team’s flag — but discretely enough so that they don’t find it and camp it —to provide a tactical insertion point for a flag rush.

Spectre’s Smoke grenade is a useful objective tool when a flag pull needs to be shrouded, or when a bit of misdirection is needed to fool the enemy forces. It may be wise to throw one of these down near a flag and have Spectre do what this wetworks Specialist does best: clean house with a deadly Shadow Blade.

As the saying goes, “offense wins games, defense wins championships”. While Torque’s setup isn’t the best for attacking the enemy objective, his Barricade and Razor Wire can be placed as defensive walls near a friendly objective to slow attacking forces... and slower make for easy targets.

Hacking through enemy defenses with the Ice Pick is useful no matter what the game mode is, but her Disruptor can be especially effective in CTF when used near objectives. Torque players will be tempted to set up their wares near the flag, Seraph will have her Tac-Deploys, but one well-placed Disruptor can knock these out with a single EMP burst.

No matter which Specialist you play, you’ll have an important role in Capture the Flag with these unique abilities and equipment.

The tips above just give you an idea of how much these Specialists change the way CTF is played in Black Ops 4. You’ll have to think more tactically and work together more than ever to become a well-oiled, flag-capturing machine.

Basically, Capture the Flag in Call of Duty: Black Ops 4 is a whole new experience compared to previous games, and we hope you dive in to enjoy it soon.