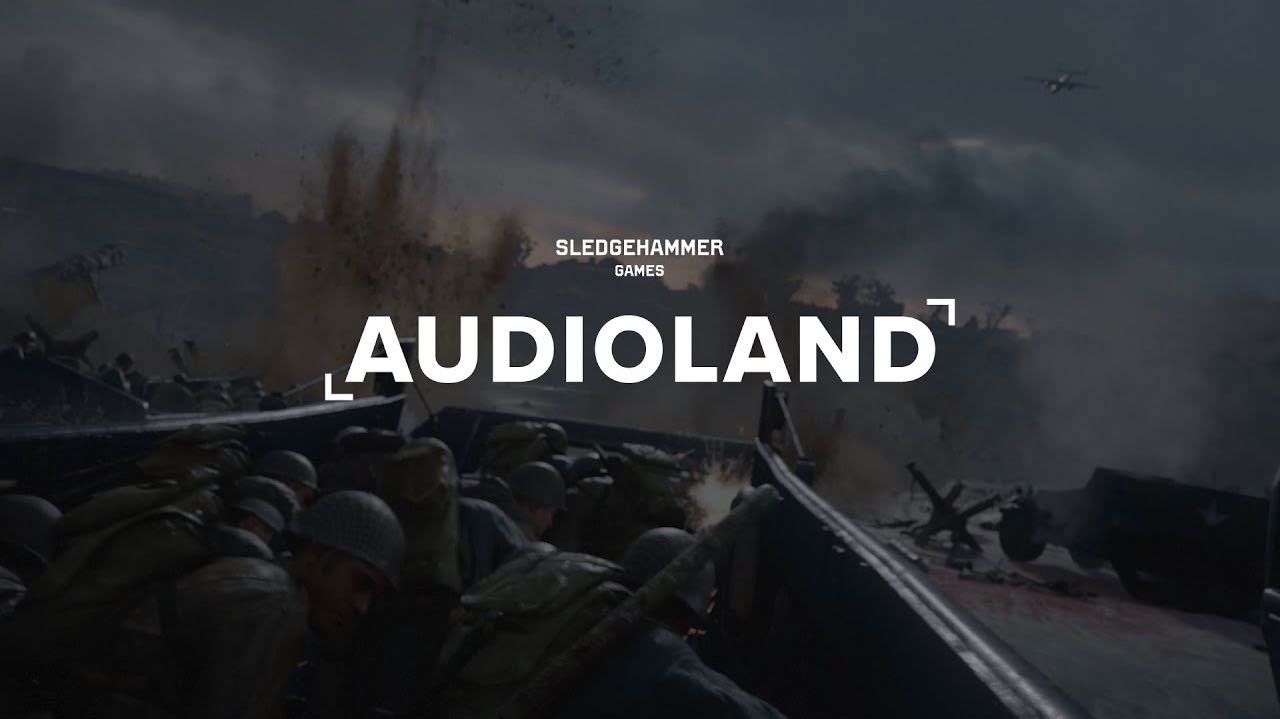 The Games Blog caught up with David Swenson, Audio Director, and Michael Caisley, Expert Sound Designer, of Sledgehammer Games to get even more insight into the world of discovering, capturing, and creating sound for their games.

What is the Sledgehammer Games Sound?

DS: In our experience, the final mix in many games can sometimes be heavy and loud because the world has so many sounds. You don’t know what the player will focus on – so the tendency is to put sounds on absolutely everything.  Coupled with the desire to always make every sound big and awesome, the result is often a game that is very full of sound.  We decided we wanted a clean and focused mix where you aren’t necessarily hearing everything, just the important things. It’s difficult to balance, but we’ve done a lot of work to realize that clean and focused mix, and we are proud of what we have achieved.

Another thing is we aren’t afraid to use high frequencies.

MS: Yea, we like to use a little brightness [high frequencies]. We call them our flavor crystals.

DS: The last thing I would add is that we prefer getting original recordings.  By recording audio sources ourselves we can ensure the recordings are dynamic and clean which helps create that focused final mix. An added bonus of recording our own source is that we can ensure all of our sounds are unique. No one else has them because they are truly our sounds that we went and recorded.

What advice do you have for someone interest in sound design?

DS: Well, the short answer is to practice – a lot.  If I were to expand on that a little, I would suggest two steps.  Step one is to learn what sounds good by training your ears. Early in my career I spent a ton of time just listening.  I listened to anything and everything until I was confident I knew what “good” sounded like. Step two is to figure out how to make that.  The second step is a lifelong journey.  It’s a long process that doesn’t happen overnight.

MC: Biggest advice I can give is there are no rules. Well there’s game engine rules and sound theory, but when it comes to being creative throw your preconceived ideas out the window and experiment. Think non-literally and unconventional.

How do you take real world sounds and transform them to future or historic sounds?

DS: Well that’s the job. It’s a complex answer, and there are a lot of ways of doing it. What makes it fun and interesting is the challenge of achieving that. Like a chef gathering ingredients, the job of a sound designer is to first go out and get great recordings. Then you need to have the ears and know-how to combine those ingredients [recordings] to get that “delicious” final product.

MC: It’s a little bit of muscle memory. Dave and I have been doing this for a while, so you develop techniques which become part of your toolkit. We also do a lot of experimentation.

With World War II you could go find recordings because it’s based in the real world, but with Advanced Warfare was it harder to create future sounds you had never heard?

DS: A lot of people think that, but it’s actually the opposite. With Advanced Warfare because things didn’t exist, we had a lot of flexibility. We make a sound that’s cool, and since no one had ever heard the sound a Warbird or Razorback, for example, it was instantly believable.

MC: We didn’t have to convince anybody.

DS: Yea. With World War II, everything exists – the tanks, the planes.  Like the sound of a Stuka.  That is one of the most famous old Hollywood plane sounds. The question was how do you create these sounds while making them new and fresh? Even though we were making a historical game, we didn’t want it to sound “old.”  We live in a high definition world, so the biggest challenge for us was to make authentic sounds that also sounded fresh and hi-def.

MC: We had these old reels with black and white footage with sound effects for World War II. The sounds there are dirtied up, so sometimes we would use a little distortion on our sounds to make them live in a similar universe. Tonally that was how we treated World War II versus Advanced Warfare where everything was clean. For example, we made our explosions in World War II kind of dirty and messy, where our explosions in Advanced Warfare were clean and crisp.

What adjustments are made to support gameplay needs?

DS: In Call of Duty® there’s two different types of gameplay with two separate goals – Campaign and Multiplayer. For Campaign, the sounds are creating the world, telling a story, and helping produce an emotional cinematic experience.  For, Multiplayer the opposite is true. The sounds are part of the player’s tool bag and often critical to strategy. Like how loud footsteps are or the sound of the hit marker.  That hit marker sound isn’t even remotely a real-world sound, but absolutely necessary to get in-game feedback which is critical to Multiplayer. The adjustments we make for Campaign and Multiplayer make the job interesting. We have to tackle problems and create sounds for both scenarios.

What are some things you tried that didn’t work or some stuff you stumbled on to?

DS: Nothing works until it does. Part of our process is iterating and experimenting. It can be painful, but that’s part of being a creative. For the Advanced Warfare Warbird, I couldn’t figure out the sound. I started out super future-y, then I tried literal helicopters; neither worked. Eventually, I took some random recordings of a subway, and I started chopping them up and heavily processing them with a tool I had never used before.  Then, everything just worked, and I was like yes, I hear it. You would never know the base layer sound of that future looking helicopter is a subway, but that ended up being just the thing to make it work.

MC: I work through experimentation, like Dave.  For example, take the Drone Swarms from Advanced Warfare.  I knew what I wanted, but not completely how to create it. I threw together a bunch of metal clanks and other sounds, then ran automation on it in different ways.  I rendered that out, then listened and made notes on what worked and what didn’t. Then I leaned into what I liked to find that final sound.

In Audioland, you guys seem to always have recording devices on you. Is that standard practice at Sledgehammer Games?

DS: When a sound designer starts at SHG, we give them a pocket recorder. I have one that I’ve been carrying around for ten years, and the reality is it’s only come in handy a couple dozen times. But boy those couple dozen times ended up being super important. I had my recorder, and I was able to record a sound I wouldn’t haven’t gotten otherwise. A sound can be the coolest sound in the world, but if you don’t record it, it doesn’t matter.

For Call of Duty: World War II, there’s a section of the level where you walk in a river. At the time there was a drought in California. The rivers were dried up, and we just couldn’t find the right sound. We tried a swimming pool, but you could hear the sound of the water lapping and reflecting off the sides of the pool, so it didn’t work. Then randomly, I went camping with my son one weekend and literally 30 feet away from our campsite was this little stream of water that was just the right depth. I grabbed my recorder and walked in the river for half an hour. It was perfect and because I had the recorder, I was able to get that sound.

MC: Sometimes you can’t take bulky equipment with you, and the mini recorder is the sound equivalent of a point and shoot camera. It’s not just for out in the wild, but it’s for anything quick in the office, parking garage; I’ve used it at my house to record my vacuum cleaner once. I don’t have to put together a rig instead I can use my mini-recorder, and it’s super convenient.

How does sound influence other teams to build a complete experience for the player?

DS: Typically, sound is the tail end of the production cycle and the audio team ends up being somewhat reactionary. The animation changed? Oh, we have to change the audio to match that. One thing that we’ve been doing is come in at the beginning of the process, before visuals and anyone has built anything, and provide sound to help guide the process.  For example, music is a great tool to help feel emotion. All the departments can listen to a music track and instantly get it. It starts the conversation and aligns everyone in the collaborative process.

How do you see the future of sound maturing?

DS: There have been all of these advances in technology to make surround sound and to make it more enveloping for the players. We are kind of getting to the place where you can’t fit anymore speakers in the living room. Now, we are trying to use that technology in more creative ways. We want to use those advanced tools to tell stories in a more powerful way.

MC: I think audiences are expecting more from sound. Because of movies, the viewers have a deep ear vocabulary.  Audiences have become accustomed to these wonderful soundscapes and they have come to expect that high level of quality in all genres of entertainment.  It’s incumbent on us to ensure that games meet our player’s ever evolving and growing sonic expectations