How to Earn and Use the Five New Winter Siege Weapons

Call of Duty: WWII’s Winter Siege community event gives you the opportunity to earn five exclusive weapons. Here’s how you can unlock all five of these weapons and use them in your Divisions.

The Winter Siege community event is going on right now in Call of Duty: WWII, and it brings with it a sack full of gifts to get you into the holiday spirit through January 2.

Along with a new Winter Carentan map and Double XP playlists, Winter Siege gives all Call of Duty: WWII players the opportunity to earn five new weapons from now until the event ends. These weapons are two melee weapons, as well as a rifle, a light machine gun, and a submachine gun.

If you want to make sure you don’t miss a single gift during Winter Siege, then this guide should help you unlock these weapons, as well as give you some suggestions on how to build your loadouts around them.

How to Unlock the Weapons Offered in Winter Siege

In Winter Siege, you can earn the Ice Pick, Trench Knife, Sten, Gewehr 43, and the GPMG through Special Orders.

Every day, Major Howard in the HQ will offer you a new Special Order that rewards you with one of these five weapons. There is no time limit to complete these orders, so if you spend a few days completing one order, don’t fret, because the five Orders rotate through on a five-day cycle. Just realize you can only have one Special Order active at any time.

Completing a multiplayer match is simple. Get into a game in any playlist, don’t quit before the end of it, and you will be on your way to completing these Special Orders.

The flexibility of these Orders gives you the opportunity to choose any playlist, including the rotating featured playlists that offer Double XP throughout Winter Siege. Take advantage of this by completing other Orders, Contracts, or Challenges that are on your to-do list, and you will find yourself earning these weapons in no time. 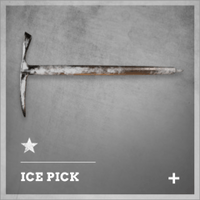 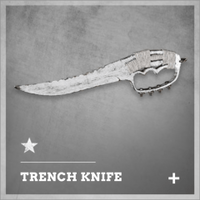 The Ice Pick and Trench Knife

The trusty Shovel now has some competition in the melee weapon department, because Winter Siege brings the Ice Pick and Trench Knife into Call of Duty: WWII.

While these weapons only offer cosmetic and animation differences, they do give you a bit of variety as a secondary weapon, or as a primary weapon if you take the Serrated Basic Training. Also, the Ice Pick and Trench Knife offer their own set of challenges, so if you are looking to rank up faster, then try to unlock these weapons and use them to level up.

If you are looking to only use an Ice Pick or Trench Knife in a game, then take the Serrated Basic Training. This Basic Training requires you to take these weapons (or the Shovel) as a primary weapon, but allows you to melee faster and take two Throwing Knives and two Tactical Grenades of your choice. Then, pick either the Airborne Division, whose Pathfinder III Division Training allows you to sprint farther and faster, or Mountain Division, whose Scout III Division Training gives you silent movement.

Be advised that the Infantry Division Skill already gives your rifle a Bayonet, which always does lethal melee damage, so you may not want to pick the Ice Pick or Trench Knife as your secondary in this Division. 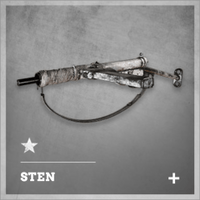 Veterans of the Call of Duty franchise may know and love the Sten, but for those who are using it for the first time, here what it is like in Call of Duty: WWII:

The Sten is very similar to the MP-40, the weapon unlocked by Prestiging the Airborne Division once. It has a reasonably high fire rate that is slower than the Waffe 28, but makes up for it with slightly better damage and range than that of those two guns. Essentially, it is best used for mid-range engagements, but it can hold its own in close-quarters situations.

If you unlock and use the Sten, it is best to use in the Airborne Division. The Airborne Division Skill provides you with a detachable suppressor, which is great for getting stealthy kills, and the Scout III Division Training will give you some great movement buffs.

The Sten’s iron sights are not obstructive, but if you want to slap on a sight attachment, feel free to do so. Otherwise, Grip and Quickdraw will give you a steadier shot and faster aim-down-sight speed respectively, and an Extended Mag will give you several extra bullets to work with in each clip.

As for Basic Training, you can play to the stealthy Airborne Division Skill and go with Undercover, which does not reveal enemy death location icons to other enemies. You can also use Duelist to get akimbo pistols as a secondary, which can be a better option for close range combat or reactionary maneuvers when the Sten is your primary. 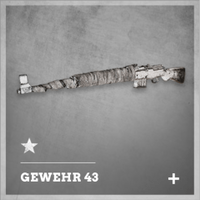 The Gewehr 43 is another weapon familiar to Call of Duty veterans, and in Call of Duty: WWII, it is comparable in statistics to the SVT-40, a weapon unlocked through Prestiging the Infantry Division once.

While the Gewehr 43 has a faster fire rate than the SVT-40 and lower recoil, its lower damage output means that it will take three shots to kill at short range, and four or even five shots to kill an enemy at longer ranges.

The iron sights on this weapon are something you need to get used to, unless you add a sight attachment, which is recommended. Using Advanced Rifling to increase the three shot kill range also is not a bad idea, and so is putting on a Grip to decrease the weapon’s recoil.

Two Basic Training recommendations are Forage, so you can resupply ammunition from killed enemies, or Primed, so you have less flinch when being shot and you can take another attachment for the Gewehr 43. Should you go with Primed and the Infantry Division, use all four of your attachments slots along with a sight that you are most comfortable with, combined with Advanced Rifling, Extended Mag, and Grip. 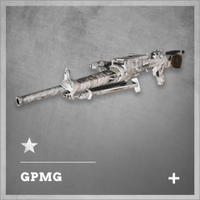 The GPMG is one mean bullet machine, with a high rate of fire that is faster than the MG 15, and with a tighter hipfire spread than the MG 42. It also gives you reliable four shot kills at any range, and the recoil is not too bad for its fire rate.

This makes the GPMG like a bridge that connects the rifle and LMG categories. Therefore, Grip and Quickdraw are the most recommended attachments, along with Full Metal Jacket, which will increase this weapon’s damage against Scorestreaks and through walls. You could also put on Rapid Fire to increase the already high rate of fire, but if you do this, be prepared to deal with this gun’s recoil.

Because of the GPMG’s slow reload speed and small clip size, Hustle is a perfect Basic Training choice, as it will allow you to reload the GPMG faster and while moving. Launched is another option, as it allows you to take a launcher as a secondary with the ability to resupply rockets to it, but only take this Basic Training if you want to be relied on for taking out enemy Scorestreaks.

The obvious choice of Division for the GPMG is the Armored Division, whose skill gives you a bipod that reduces recoil and reload speed when you plant your GPMG on a ledge or on the ground. The Tanker III Division Training is also nice for this Division, as it lets you take less damage from fire and explosives.

Alternatively, the fast fire rate of the GPMG could make for a good run-and-gun class. You may think that you will run like a stack of bricks with this weapon, and you will, unless you boost your speed by using the Airborne Division. The Airborne Division Skill Pathfinder III gives you increased sprint speed, and if you really want to move fast across the map, pair this Division with the Energetic Basic Training, which will allow you to sprint again sooner after you run out of stamina.

That’s all you need to know about unlocking and using these weapons, so go out there and enjoy Winter Siege from now until January 2. We’ll see you on the field!