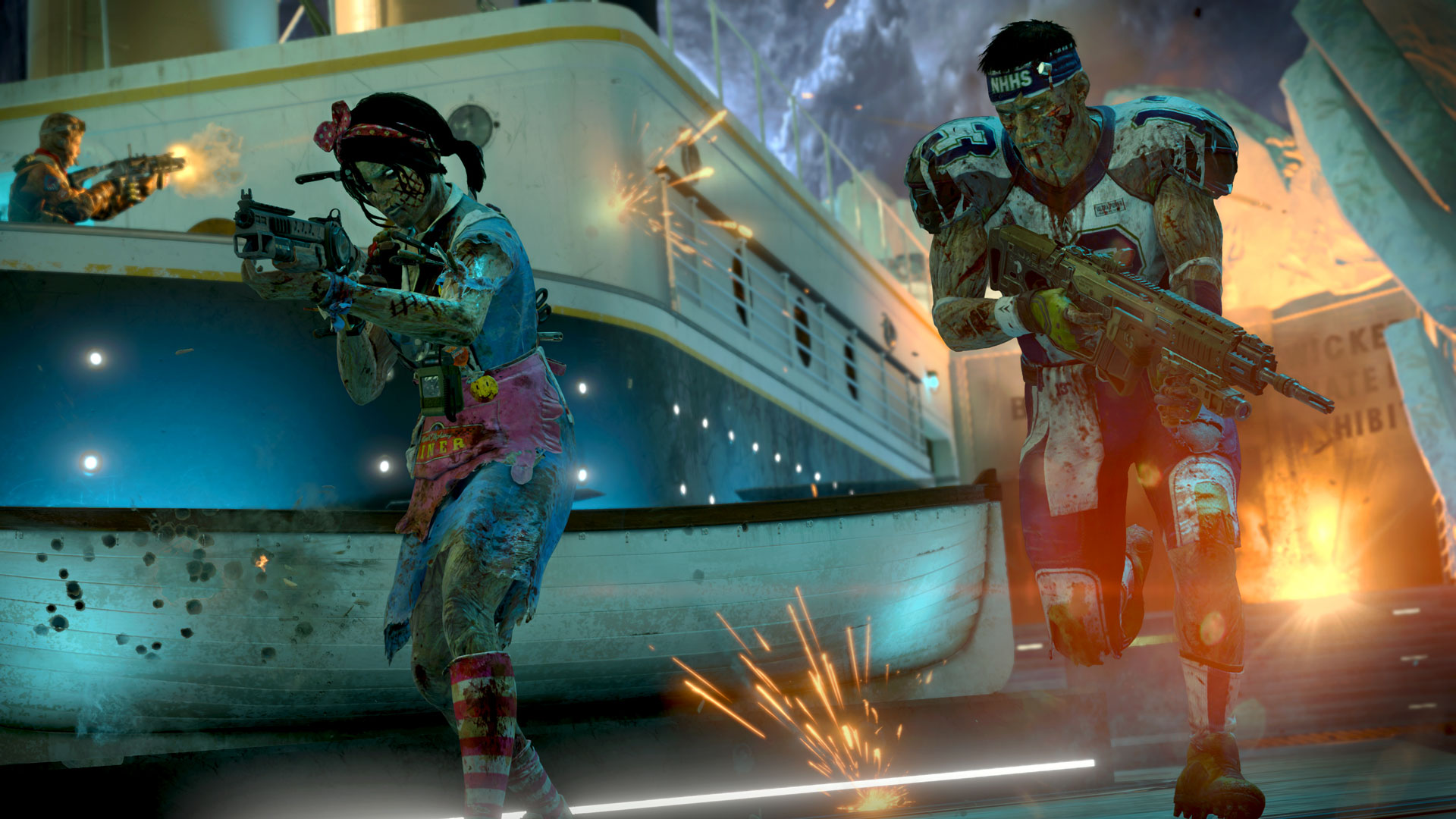 This map spotlight takes us to the Museum of Unnatural History, a tourist trap in the marshes of Louisiana… and now a death trap due to a mysterious new relic!

"Deep in the Louisiana marshes, ‘The Museum of Unnatural History” has purchased a unique relic of the past. Sadly for them, the relic still thirsts for chaos and blood.

Welcome, guests of the Museum of Unnatural History!

As part of Operation Apocalypse Z in Call of Duty: Black Ops 4®, Black Ops Pass holders will get the chance jump into Remnant, set within the wetlands of the Pelican State, and investigate the complex of a Zombies-themed museum.

Normally, this tourist trap would be filled with those checking out some of the cool and creepy exhibits. However, after the museum purchased a peculiar relic, it’s eerily quiet here.

What’s inside the museum? How can you use it to your advantage in the heat of battle? Let’s take a quick tour and breakdown Remnant for our latest Map Spotlight. 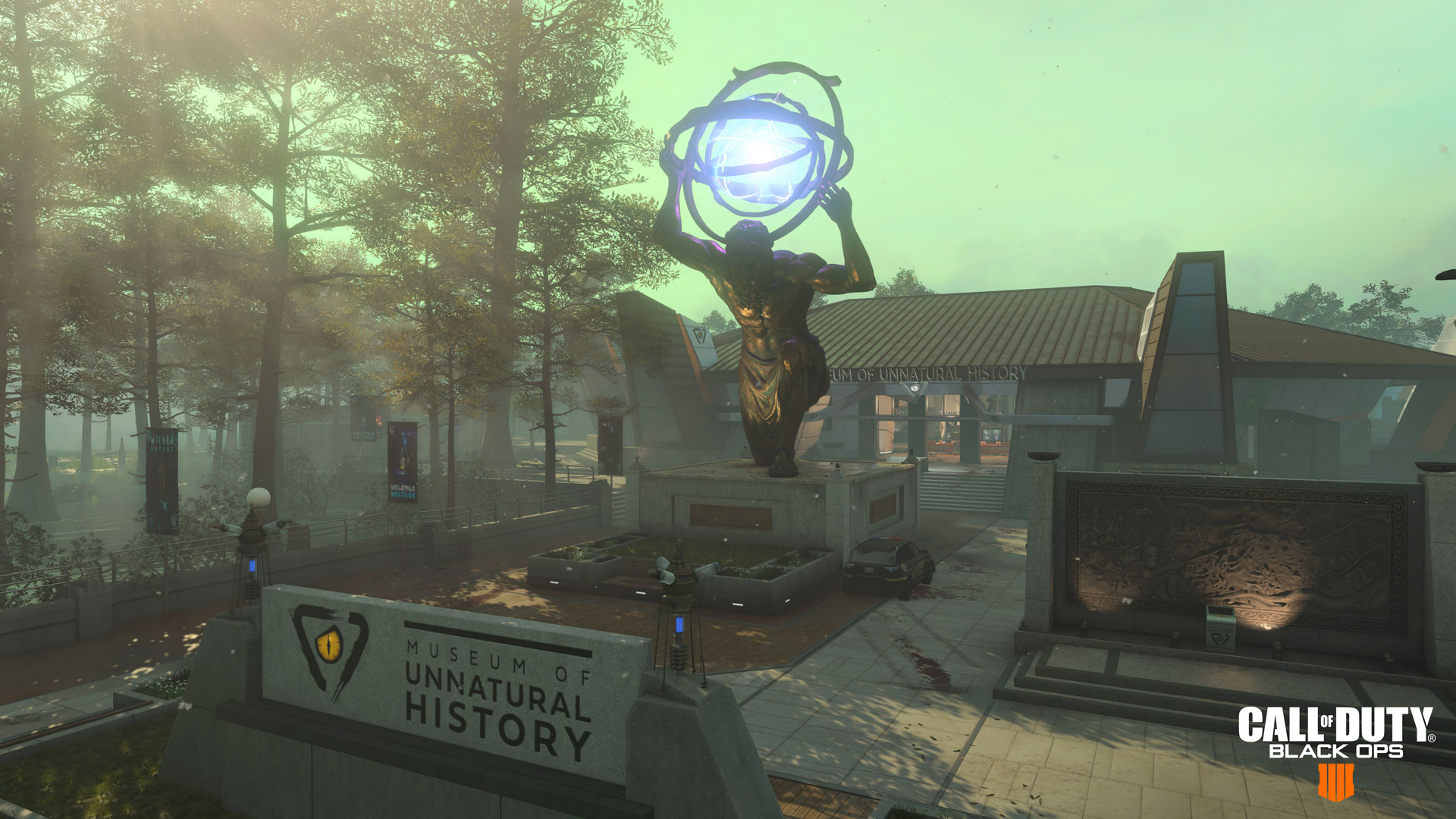 The Museum of Unnatural History contains an impressive collection of Zombies lore including early protypes of weaponry, teleportation machines, and a bus no longer in “TranZit”. Even in the outside courtyard, where one of the team spawns, a statue of Atlas sits marking the entrance.

The museum could use a little bit of clean-up due to the blood-stains on the floors and all over the walls, but it’s still one lively complex with four main exhibits and one on the way inspired by Zombies experiences:

There’s the Craters of Hell, a two-story room that is based on “Moon”. This is also the origins of that escaped relic evident in the archive room chaos on the first floor.  Wicked Waters is an area based on the “Voyage of Despair” (which you can play in Black Ops 4!). Continue past the replica Titanic to find the Bus from Beyond exhibit, an area based on the “TranZit” experience from Call of Duty®: Black Ops II (and also contains our favorite bus driver T.E.D.D.). Lastly, to the right of the information desk you’ll find  Asylum, which may prove familiar to Blackout players and is based on the World at War map “Verrückt”.

No matter what exhibit you explore, the undead will be around shrieking and shuffling about and out of reach. Don’t worry though; the zombies won’t attack, but you may find a couple hovering above the moon...

Outside of the main museum complex, the map’s Southern section contains a lot of open space to the Bayou, as well as what will become the Lost in Time exhibit. While the South side of the museum is still under construction, the Northern side near the Craters of Hell exhibit holds the Security area and Swampy Skippers Souvenir Shop, which have two functioning teleport pads. 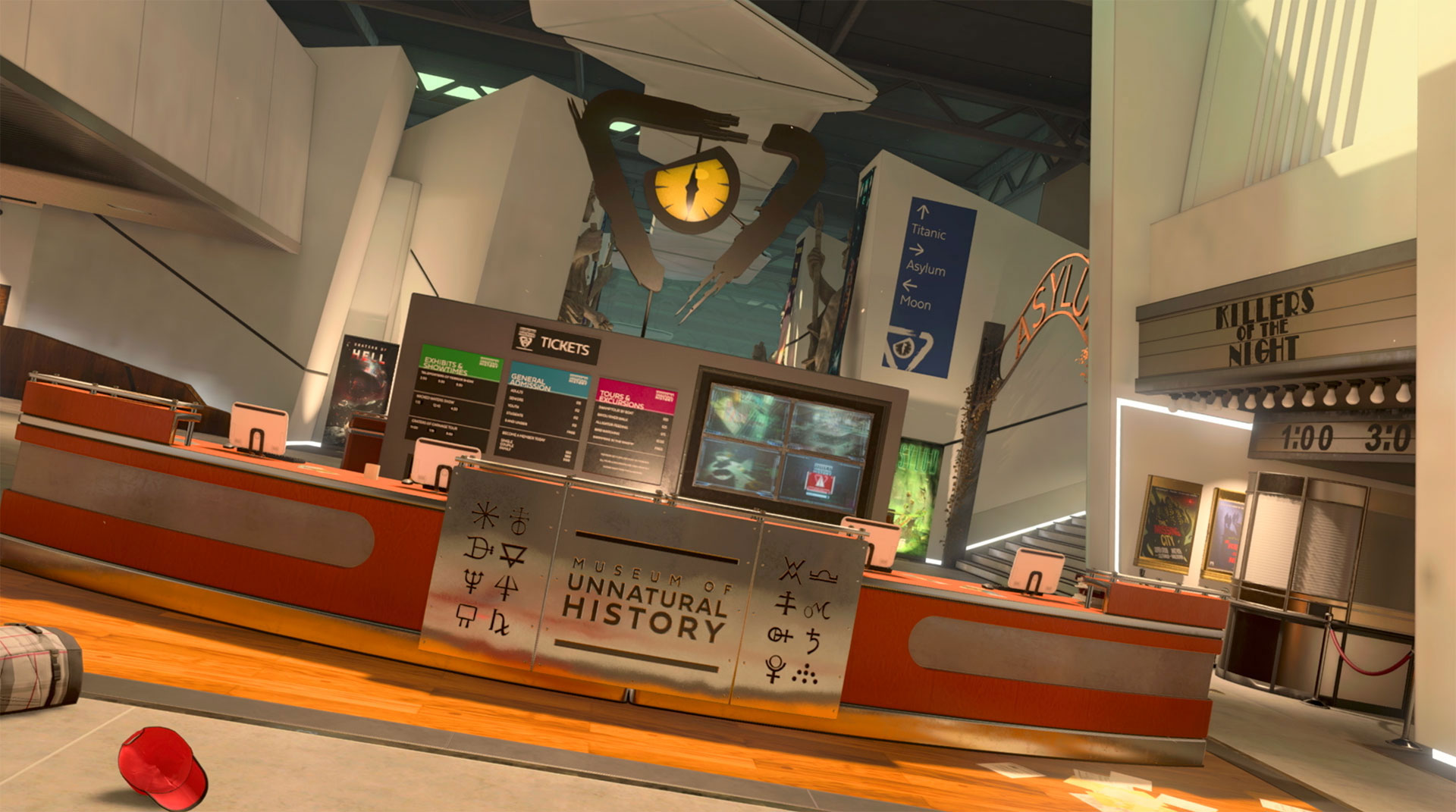 This museum is on the larger side of maps in Black Ops 4, so to take in all the sights, consult one of the few directories located around the complex or listen-in on some audio files on the exhibits courtesy of the museum staff to get a complete lay of the land.

The swamp, teleporting pads, and unique museum layout gives players a lot of key decision-making power to navigate the map and mount an attack. Due to all of that, all weapon types can be viable on Remnant.

Snipers may find solace when looking out the windows of the Security area, or on long straightaways in the museum hallways. Meanwhile, short-range weapon users can duck around pedestals, stick to corners, or take a dip in the lagoon to close a gap between themselves and the opposition.

As for those Ruin users out there, there are plenty of Grapple Gun spots to be explored. For example, the mock Titanic in the central Wicked Waters is hard to mantle up on, but a simple use of the Grapple Gun can vault one up, over, and right near an over-confident enemy. 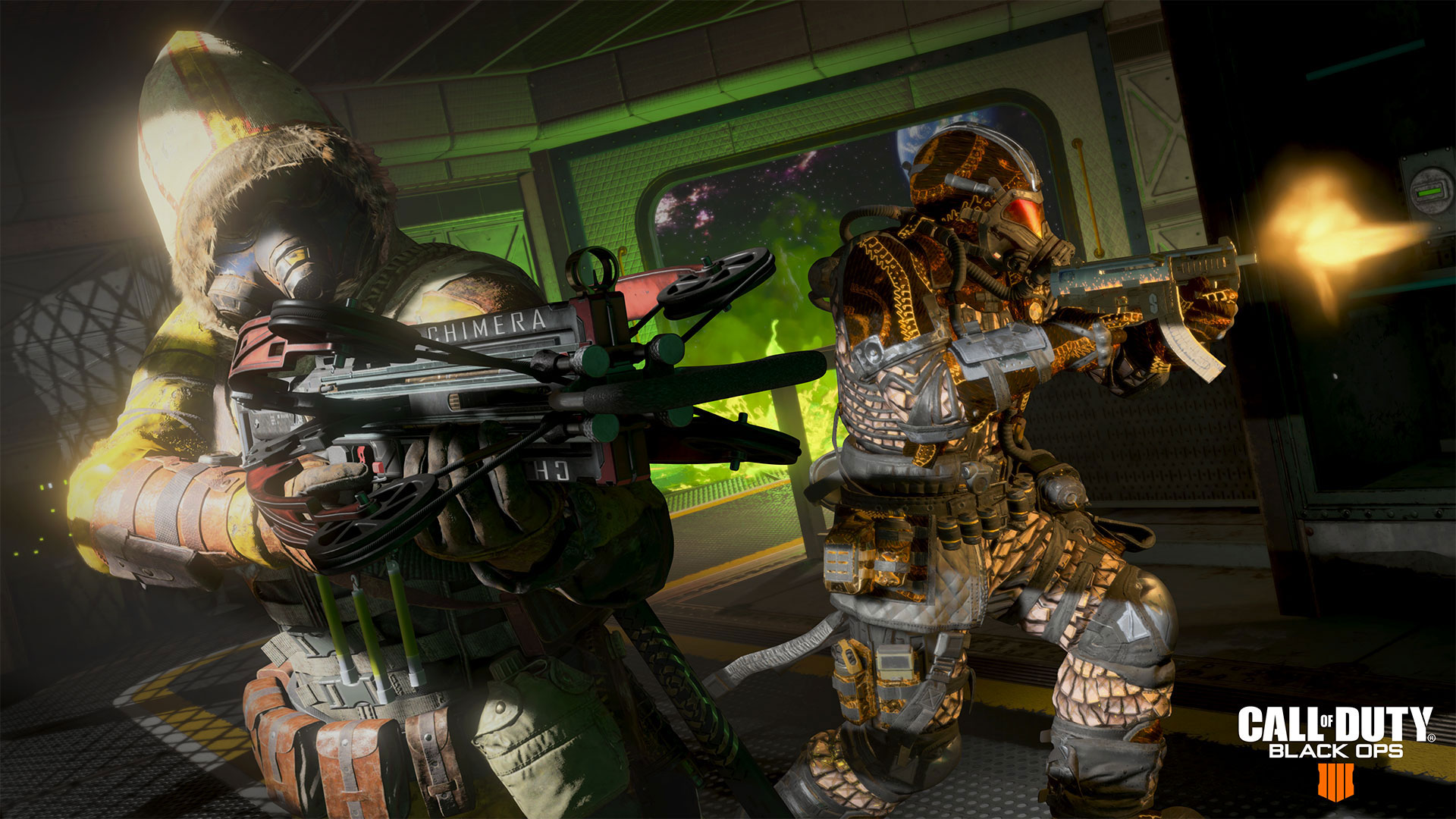 When playing in the Map Pack Moshpit playlist, you may find yourself in a Domination battle on Remnant.

For this objective mode, the three flags are distributed far around the museum grounds in a triangle, which means it is viable to hold the A and C flags — usually “spawn” flags that might not be as contested on other maps — without working to cap the typically hotly-contested B.

The map’s southern portion makes a direct line from the A flag to the C flag, so it might be a good idea to lock these down should the enemy forces turn the museum into their stronghold. Using the water may help with defending or attacking these two flags, as other players might not check the vast and murky pools while sprinting over to the objective.

As for the B flag, it sits right in the Craters of Hell directly on top of a crater… isn’t that fitting?

Due to the crater’s natural shape, it is possible to duck inside, or even next to, the crater while also capturing the objective. From a good number of angles – depending on where you go prone – it might be hard for the enemy to spot you, which could lead to some stealth captures.

Keep that in mind when you first race to capture the objective, as well as when the flag shows up as contested, yet you can’t seem to find anyone on it.

The northern path of the map which also has the teleporters can be used to flank and catch enemy players off guard. Although the teleports only transport you a short distance down this route, it still may further help those looking for a potential flank.

For Search and Destroy, the teleporters play a significant role in gameplay strategy as one of the bomb sites is located between them. While you and your teammates can take advantage of the teleporter to close distance, be mindful that enemies can do the same.

The map’s unique spacing and size enables seven hardpoints. With that, players can take a tour of the museum and employ diverse gameplay strategies and tactics as the hardpoints rotate around the map. 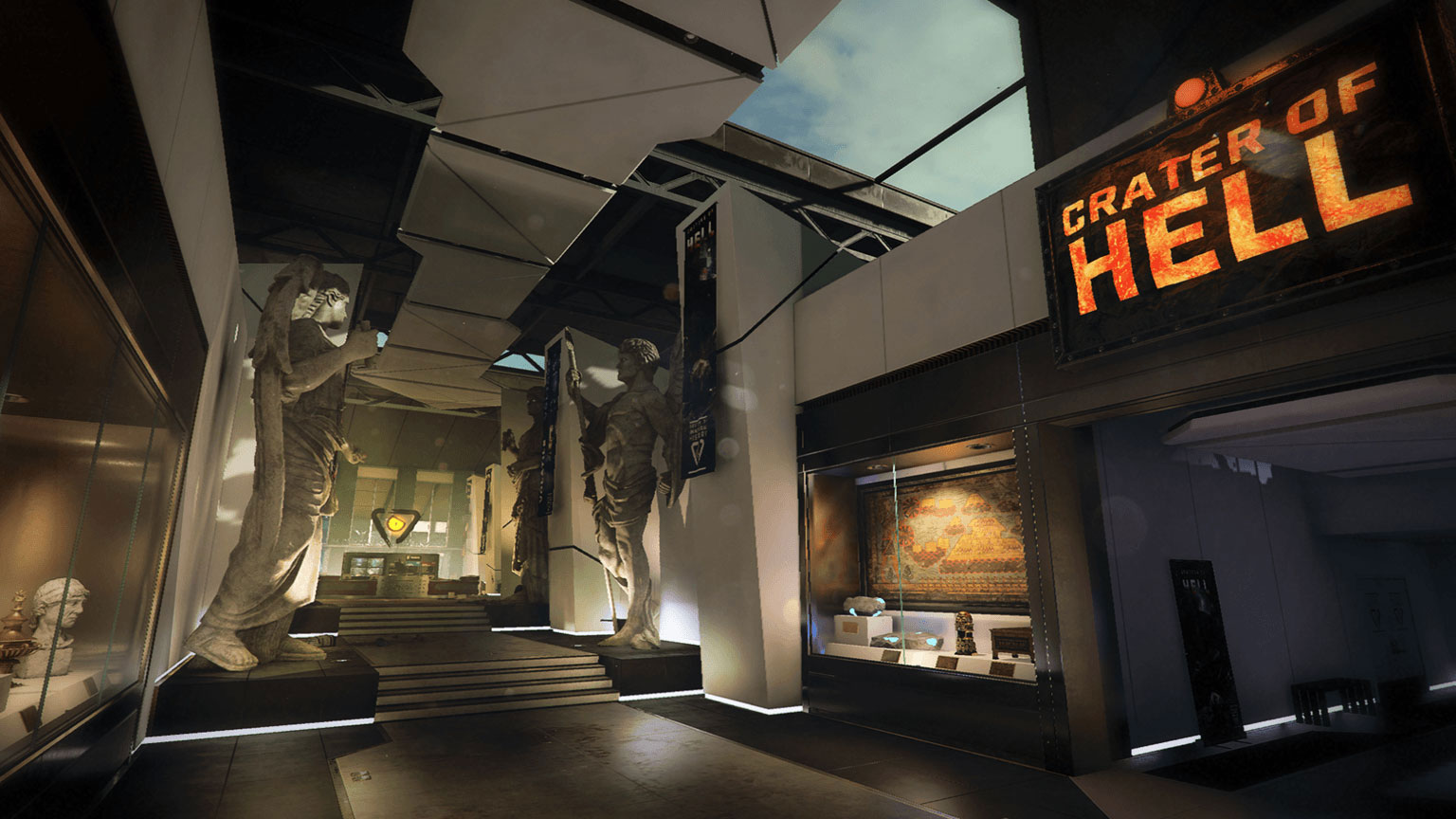 We’ll see you online, and we hope you enjoy this Multiplayer map tribute to the past decade of Zombies history.