A Guide to Carentan in Call of Duty: WWII

During Winter Siege players will find a new version of the wildly popular Carentan available to everyone. If you haven’t played on this iconic map yet, here are a few pointers that may help you out.

If you are a Call of Duty fan, this season already has a reason to celebrate with the Winter Siege community event. It’s going on right now in Call of Duty: WWII and brings holiday cheer to all players, including a new, frosty winter themed version of the Carentan map.

First seen in the original Call of Duty, a new version of the map was created for Call of Duty: WWII and included as a bonus map for Season Pass holders. However, while Winter Siege lasts, you can also experience a winterized version of this map for a limited time.

Whether you’re a Call of Duty veteran, or experiencing Carentan for the first time, here are four tips that will give you a few strategies while playing on this map. 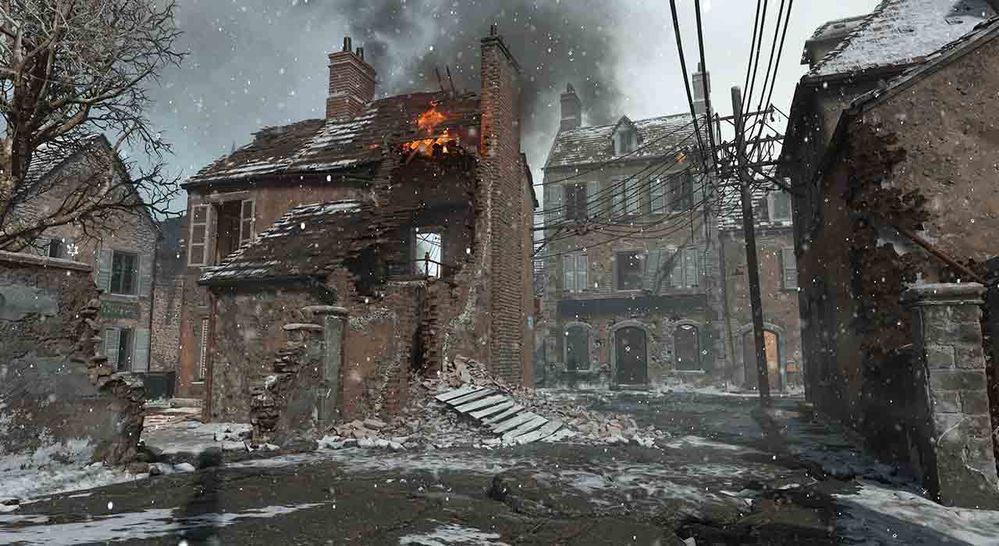 Shotgun and submachine gun users, Carentan may become your favorite map if you can learn to effectively weave in and out of buildings.

The middle of the map features plenty of houses and tight hallways, which play to the strengths of the high-damage output of shotguns and submachine guns. Run wildly at opponents who duck into these buildings for cover, and you will start earning streaks in no time.

However, you could become a sitting target outdoors or when you are in front of windows and doors. The more an enemy can see you from a distance on Carentan, the more at risk you may be, so keep moving between buildings and away from anything facing outside.

If you really want to run and gun on Carentan, try using the Airborne Division. Their Division Skill is a Suppressor, which can help you get a drop on the enemy. The Airborne Division Training is Pathfinder III, which gives you faster movement. For a Basic Training, we recommend Inconspicuous, which gives you quicker movement while crouched and more quiet movement overall, or Undercover, which hides your enemy death locations, and confuses your enemies by not changing their reticle from white to red.

The Streets are a Rifle’s (and LMG’s) Best Friends

Carentan also features vast open space, and that means that it can be a great location for rifle or light machine gun users. Damage at a medium distance is very effective in Carentan’s streets, so be liberal in how much time you spend outside. However, you also need to watch your back for enemies who may try to flank you. You can also play to your strengths in multi-level buildings by setting yourself up in a window and picking off enemies below you.

You can also use slower firing submachine guns, such as the Grease Gun, in the streets as well. You may not want to put yourself into long-range engagements, but if you see an enemy using a rifle or LMG nearby, you will have a big advantage in taking them down by using a weapon with a high-damage output at that range. 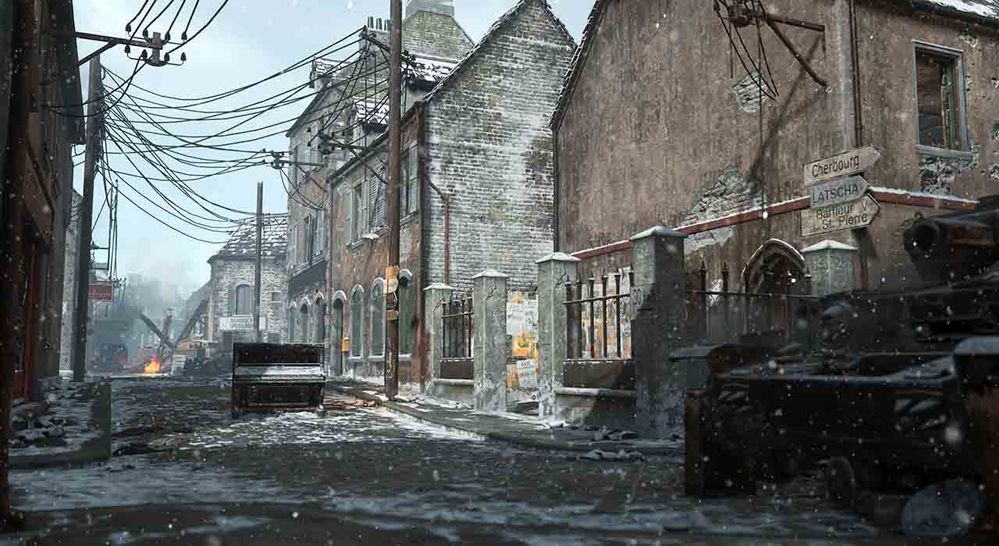 If your opponent sees that you are using a rifle or an LMG, he or she may try and disorient you with grenades and fire. If you find yourself in that situation, use the Armored Division. The Armored Division Training ranges from immunity from shell shock and tactical equipment at Tanker I, to significantly reduced explosive damage at Tanker III. For a Basic Training, take Primed if you want an extra primary attachment and less flinch when shot, or Forage if you want to resupply your ammo from dead enemies and swap weapons faster.

Yes, You Can Snipe in Carentan

Don’t feel like you will become the saboteur on your team if you choose to pick up a sniper rifle on Carentan. If you’re at your best when using with a sniper rifle, then there are a few spots on Carentan where you can take advantage of your accuracy and lethality.

First, the second floors of buildings around the map, especially in Carentan’s central house, offer good lines of sight on the surrounding streets. However, the best areas to snipe are across the long roads around each of the houses. Look for a comfortable location on the streets, from there you can keep your distance from the rifle and LMG users. You can rule these streets by anticipating enemy movement and taking smart shots.

While these positions give you great sight lines, they will also be checked often by enemies, who will try to flank you. With that in mind, make sure to move often and carefully from point to point, and consider using the Mountain Division. The Mountain Division Training Scout III features completely silent movement, which will aid you in moving undetected from cover. If you are going to snipe on Carentan, taking the Basic Training skills Lookout, which provides increased mini-map coverage, or Instincts, which warns when you are targeted off-screen and allows you to detect enemy equipment, are good ways to round out your loadout. 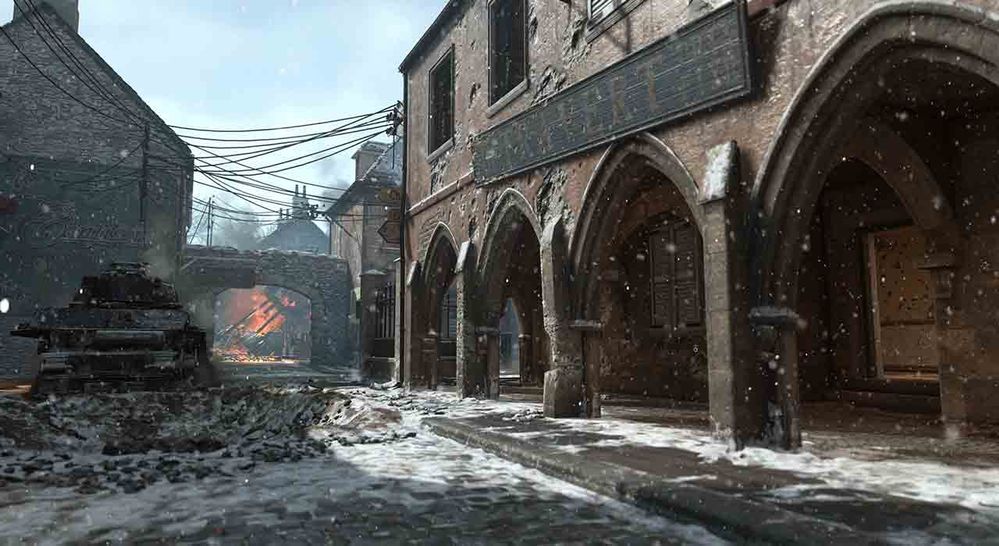 The Shortcuts and Secrets of Carentan

When moving around Carentan, you may be tempted to take the obvious paths around the buildings through the map’s streets. However, staying in the streets for the entire game without dying may be a tough task.

Another way to move around the map is through the collection of buildings in the center. These buildings stretch out from the southern-most apartment all the way up to the northern-most street, and are all connected in some fashion.

From the southern Apartment, you can climb out from the MG nest window and across a small roof toward the Headquarters house. Going down the Headquarters’ steps can either bring you into the Front Yard and eventually into the Main Street, or out into the Back Yard.

In the Back Yard, there is an entrance to the Tavern through the Courtyard, which is a 180-degree turn from the Headquarters’ back entrance. This building has three separation sections with some degree of separation, including a hole in a second-floor wall that leads to a good vantage point over the map’s northern Cratered Street.

On top of being an effective strategy to move across the map quickly, moving around these buildings can make it easier to ruin a window watcher’s day. If you find that there is a pesky sniper or another enemy staring out one of the middle building’s windows for too long, flank your way through a conjoining building, then cook a grenade or fire a weapon with FMJ to smoke him or her out.

That’s all the tips we have on Carentan for now, and we hope you enjoy the winter version from now until January 2. Until then, get in there, enjoy Winter Siege, and have a happy holiday season!