Build a whole new loadout starting today, with a brand-new unique energy rifle that Season Pass holders can access right away, along with a new melee weapon to add to the mix.

While the winter-themed fun of ‘Tis the Season might be melting into our memories with spring on the way, there is plenty of new lethal loot available in Call of Duty: Infinite Warfare starting today.

First up, Season Pass holders can get their hands on a brand-new weapon right now. It’s the R-VN assault rifle: a two-round burst, auto-fire, energy rifle can also be split into melee mode for faster movement and one-hit kills. When you crack this thing in half and charge into your enemies, it works sort of like a very lethal defibrillator.

As a reminder, the Call of Duty: Infinite Warfare Season Pass not only gives you immediate access to the R-VN and access to four DLC map packs, including the recently released Sabotage, but Season Pass owners will also get 10 Rare Supply Drops and 1,000 Salvage upon activation. If you haven’t picked up the Season Pass yet, now is the perfect time. 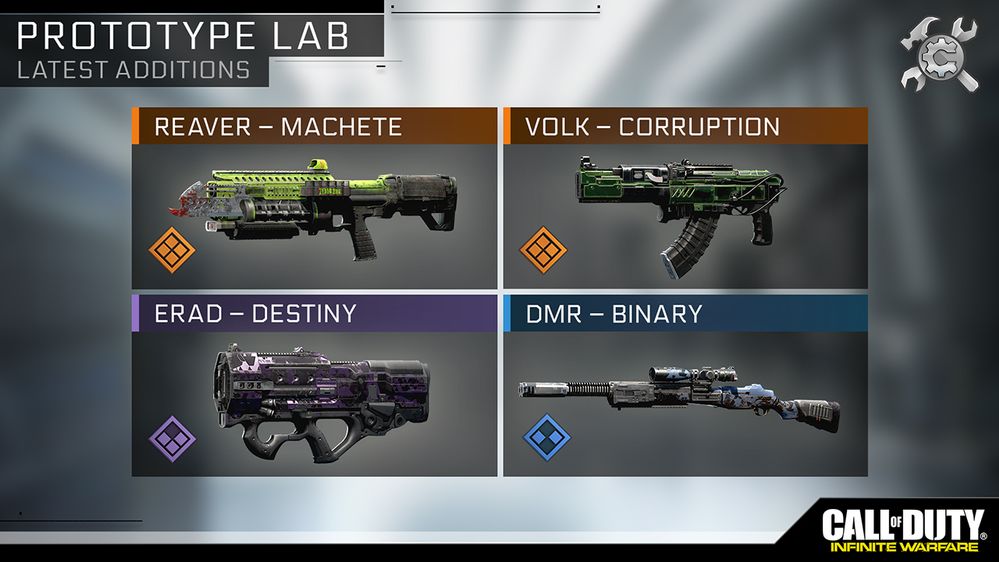 We also have some good news for players both with and without a Season Pass. A slew of weapons that have previously only been available as part of the Quartermaster Collection have moved into the Prototype Lab and are now able to be crafted with Salvage. These include:

A handful of new weapon prototypes are entering the Quartermaster Collection, including a brand-new melee weapon for Infinite Warfare. Up until now, the CQC tactical knife has been all alone under the Melee category in the Secondary Weapon section, but that’s about to change.

Starting today, this blood-splattered new bladed weapon will be available to add to your loadout, and should inspire fear in combatants as you wield it while rounding corners.

With these new weapons and new ways to melee, you can give your entire loadout a complete makeover, starting now. Just watch out for those axes.