At E3 2018, Activision and Treyarch gave Call of Duty fans a taste of Call of Duty: Black Ops 4 Multiplayer.

I was one of those fans who played this game for the first time on the show floor. Needless to say, I was completely blown away with how Treyarch made it easier for me — a lone wolf player — to work with a team of fellow attendees that I’ve never met before. My squadmates and I finished the demo ready to play this game again in October, where we can hopefully team up again in Multiplayer.

Before I hopped into the action, I explored Create-A-Class and its Pick-10 system. Relatable to the Black Ops II and Black Ops III systems, this feels refreshed with a new interface, weapons, and loadout options.

When choosing my weapons, I noticed that no two guns have the same attachments to choose from. Some weapons, like the Auger DMR, even have attachments with levels that can use up two attachment slots for added benefits.

For example, when I selected the High Caliber I attachment to increase my gun’s damage on headshots, I got the option to select High Caliber II, which increases damage to shots placed to the head and upper chest, as another attachment. This abundance of attachment options, compounded with the new Operator Mods, gave me a wide variety of Create-a-Class choices – it truly feels like there are an infinite amount of options you can build.

In the pre-match lobby, my teammates and I talked about our Specialists. In Black Ops 4, a Specialist can only be used by one player, so it was important to make sure none of us wanted the same Specialist.

I mostly chose Seraph, my favorite Specialist from Call of Duty: Black Ops 3, in order to use her Tac-Deploy equipment to give my team spawns near Domination points or the Hardpoint. Her Annihilator weapon also helped me capture objectives, as its one-shot, one-kill properties helped me clear out rooms or deter enemy advancements. 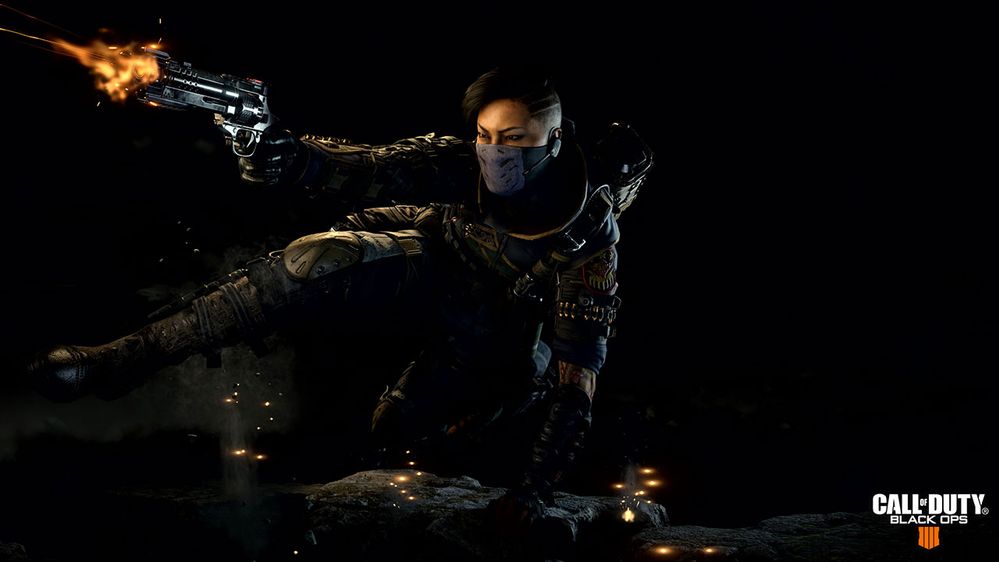 During my first game — Domination on Contraband — I had to make the adjustment to recovering health manually by pressing L1 on the PlayStation 4 controller. I was happy to find that it didn’t take long to commit healing to muscle memory in order to learn this as a new tactic and that it quickly fell into the flow of combat. The Stim Pack I chose for Equipment on all of my classes allowed me to heal more often, which came in handy whenever I was diving from enemy fire near the B capture point and into the river below it.

Speaking of health, having 150 base HP did not feel out of the ordinary. Gunfights were long enough to make tactical moves, but not so long as to force standoffs. The health bar above every player helped me gauge how much damage my teammates and I did to enemies, which gave us more information to work with when approaching each engagement.

I found myself swimming around a lot during the first game, moving across the three-laned map to flank my opponents. I never felt sluggish climbing ladders or mantling into windows, and my weapon was always at the ready in case an enemy came around a corner.

After finishing that game, we loaded into Hardpoint on Frequency, a small and frenetic map that made its debut at E3. At one point, I was afraid that I had fallen off of the map when I took a wrong step on a platform. However, it actually was an opening to the map’s catwalk system, which gave me new routes to objectives and to enemy spawns.

I also wound up learning a lot about Torque, a Specialist one of my opponents used during this game. His Razor Wire made it harder for me to attack Hardpoints, as it forced me to either walk through it, which made me lose health and move slower, or put a lot of time and effort into destroying it.

At the end of both games (which my team won, for the record), I can say that I honestly cannot wait to spend my weekends (and maybe more than a few all-nighters during the week) playing Black Ops 4 Multiplayer. And, of course, fitting in plenty of rounds of Zombies and Blackout in between sessions.

James Mattone is a paid writer for Activision and has been playing Call of Duty since December 25, 2009.