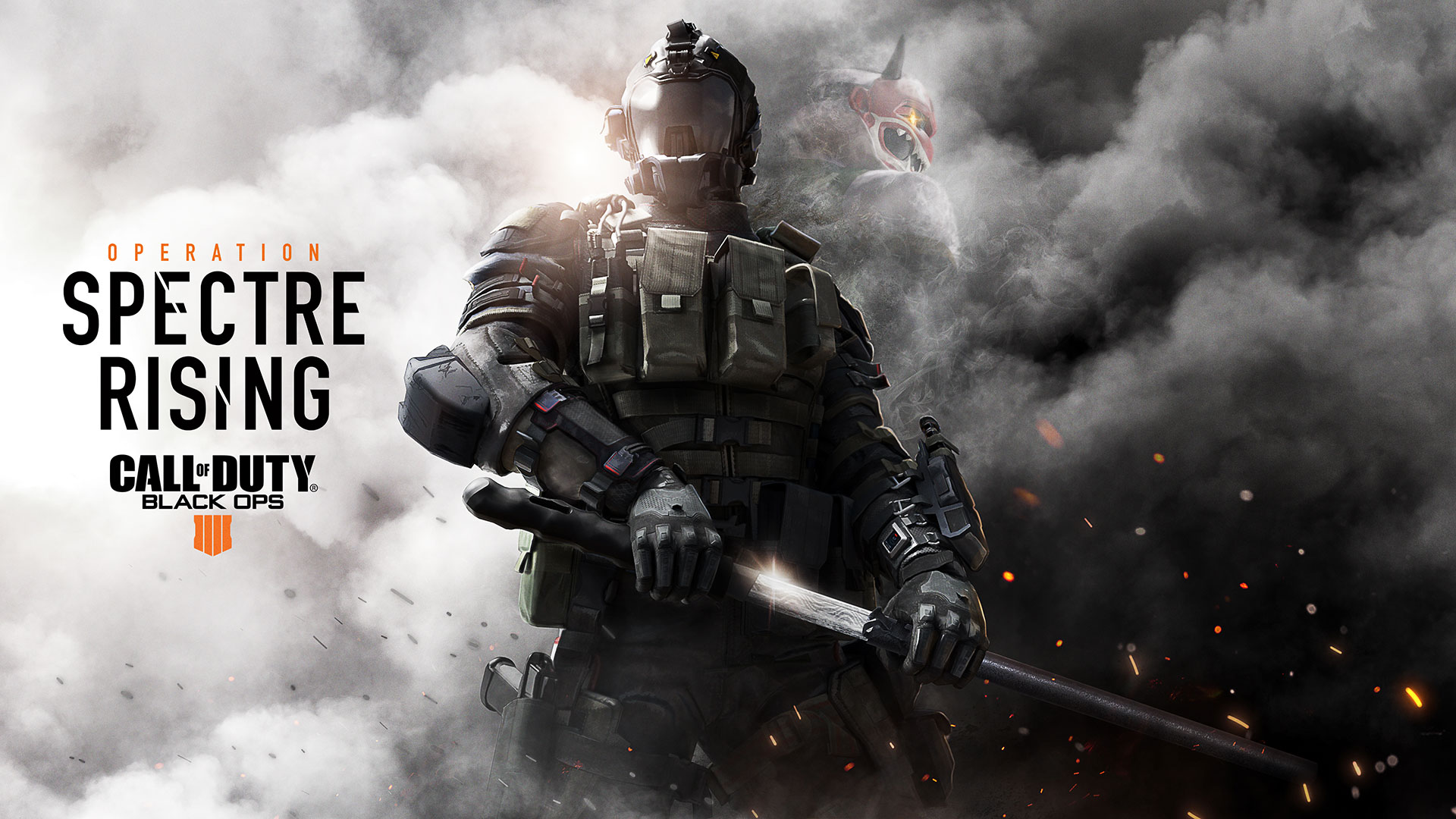 A new season of epic content for Call of Duty®: Black Ops 4 launches today, first on PlayStation® 4, with other platforms to follow. Operation Spectre Rising offers game modes with an emphasis on stealth gameplay and assassinations. Plus, you can turn yourself into a prop with the return of Prop Hunt! Intrigued? Here’s a look at what’s new for Operation Spectre Rising: 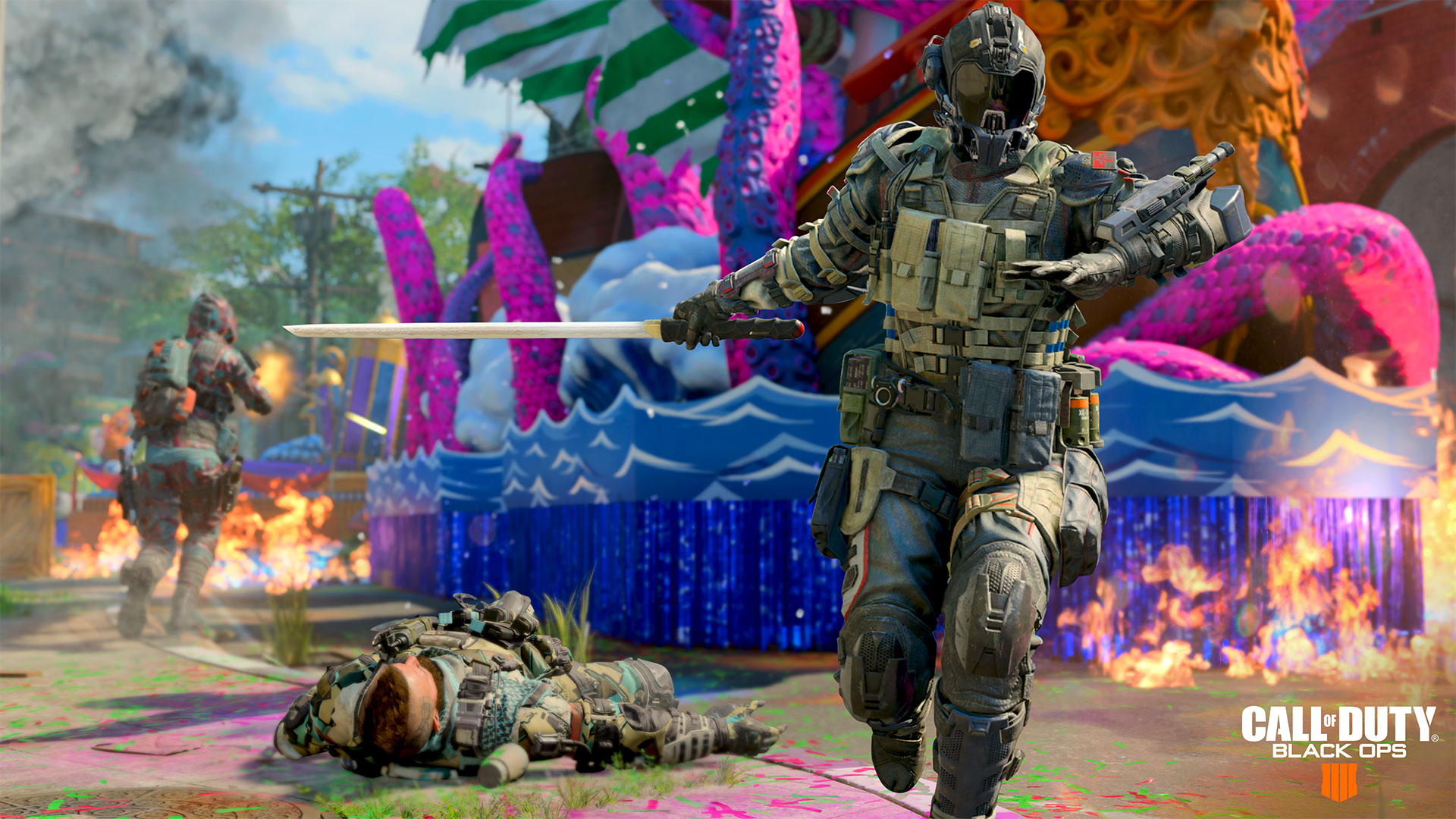 Spectre: A mysterious and deadly liquidator from Black Ops III, very little is known about this free agent. Spectre’s place of birth, name, and even gender are unknown, but one thing is most certainly clear; you don’t want to be on the wrong end of the Shadow Blade!

Spectre’s Special Issue Weaponry is designed to channel your inner assassin. Equip the Shadow Blade to transition your perspective to third-person for a greater field of view. Lock onto and lunge at enemies for a quick takedown or chain melee attacks to eliminate multiple opponents.

When using the Shadow Blade, Spectre can roll forward, to the side, and backflip to retreat from enemies and avoid gunfire, making this Specialist difficult to pin down. Spectre’s Special Issue Equipment, the Smoke Grenade is a complete tactical tool. It disables aim-assist of enemies caught in the smoke while outlining players so Spectre can easily take them down.

New Game Mode, Prop Hunt: Arriving May 3 (on PlayStation® 4, with other platforms to follow), Prop Hunt makes its Black Ops 4 debut, pitting Hunters against Props in a 12-player, 6v6, round-based game. Props take the form of environmental scenery in a high-stakes and hilarious game of hide-and-seek! Props have 30 seconds to hide, attempting to blend into the map. They can change their prop (be it a fence or pile of logs), or strike and concuss a Hunter to escape, giving them a chance to reposition their hiding spot. Props whistle every 30 seconds to give Hunters a hint to their location. If you’re a Hunter, your task is simple; neutralize all props! If all props are found and dispatched, the Hunters win the round, but if a single prop survives the round, the Props win. 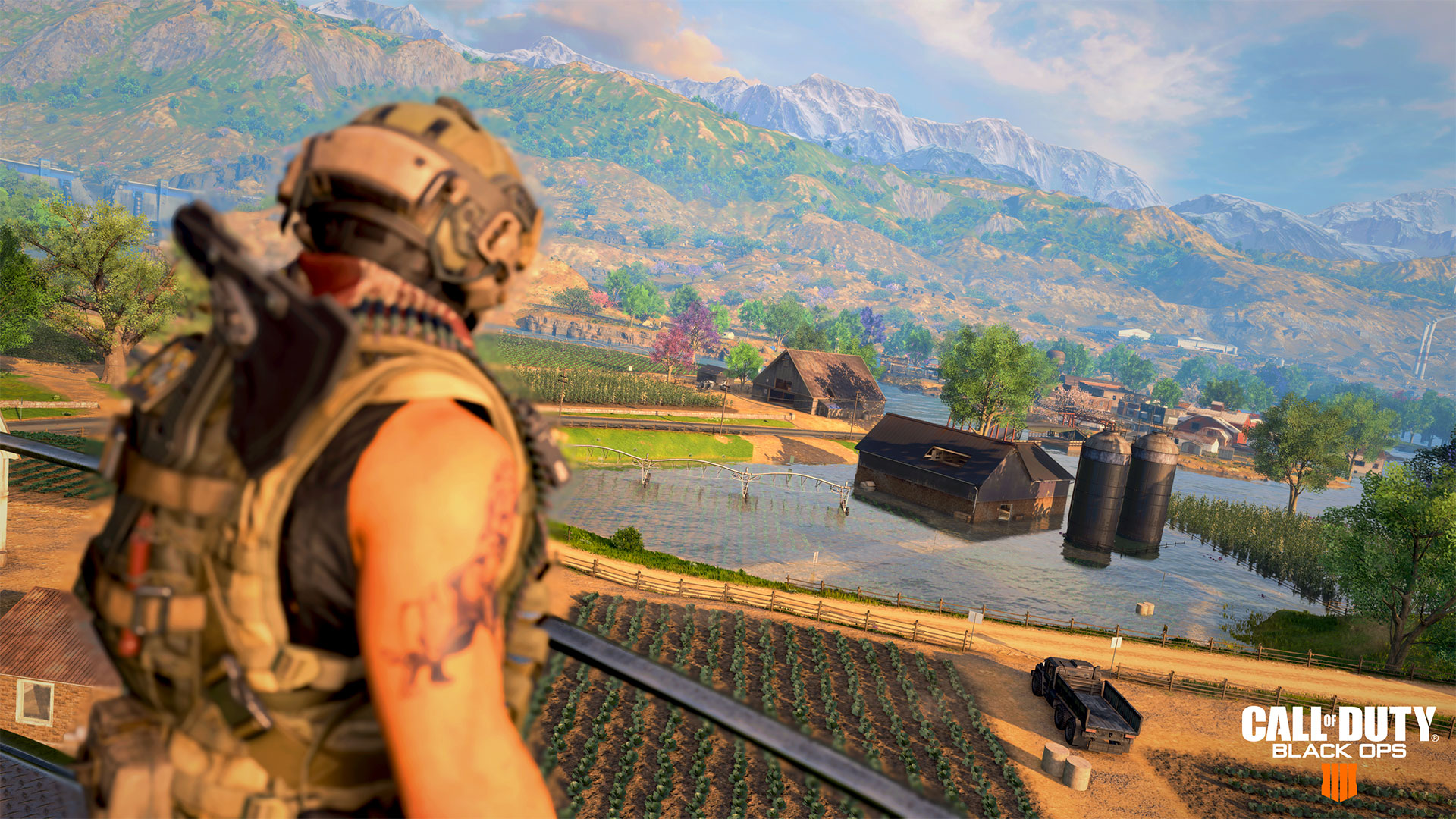 Main Blackout Map: The Wetworks Map Update following the Dam explosion transforms areas of the main Blackout map along the river. Factory, Rivertown, Cargo Docks, and the farm near Firing Range have all suffered damage and flooding, resulting in dramatically different terrain downstream from the detonation. This means new strategic plans are needed when investigating or defending these areas. The Tactical Raft and PBR can become a great deal more important as you tactically maneuver through these waterlogged locations!

New Game Mode, Bounty Hunter: In this fun and frantic new Blackout game mode on the original map, you’re tasked with racing to find one of Spectre’s  Shadow Blades, which are marked with a beam of light. Find one, and you transform into Spectre!

As Spectre you are given unique abilities and intel on top targets throughout the map. Equip the Shadow Blade to switch the action to third person and use your newly acquired skills: increased speed, rolling, and the ability to see foes’ digital footprints to hunt down targets. Successfully eliminating targets or surviving an attack rewards you with the bounty – a supply drop on your position.

Spectre’s abilities are only active when the Shadow Blade is equipped, and players that switch to their stowed weapon will return to the first-person perspective. Battle as Spectre and takedown enemies to refill your health and stowed weapon ammo; the last team standing wins.

Other Content: Obtain the DART (an aerial reconnaissance-only equipment from the MP Scorestreak), new Blackout Characters (see below), and Black Ops Pass owners can now play as Uncle Frank (see below)! 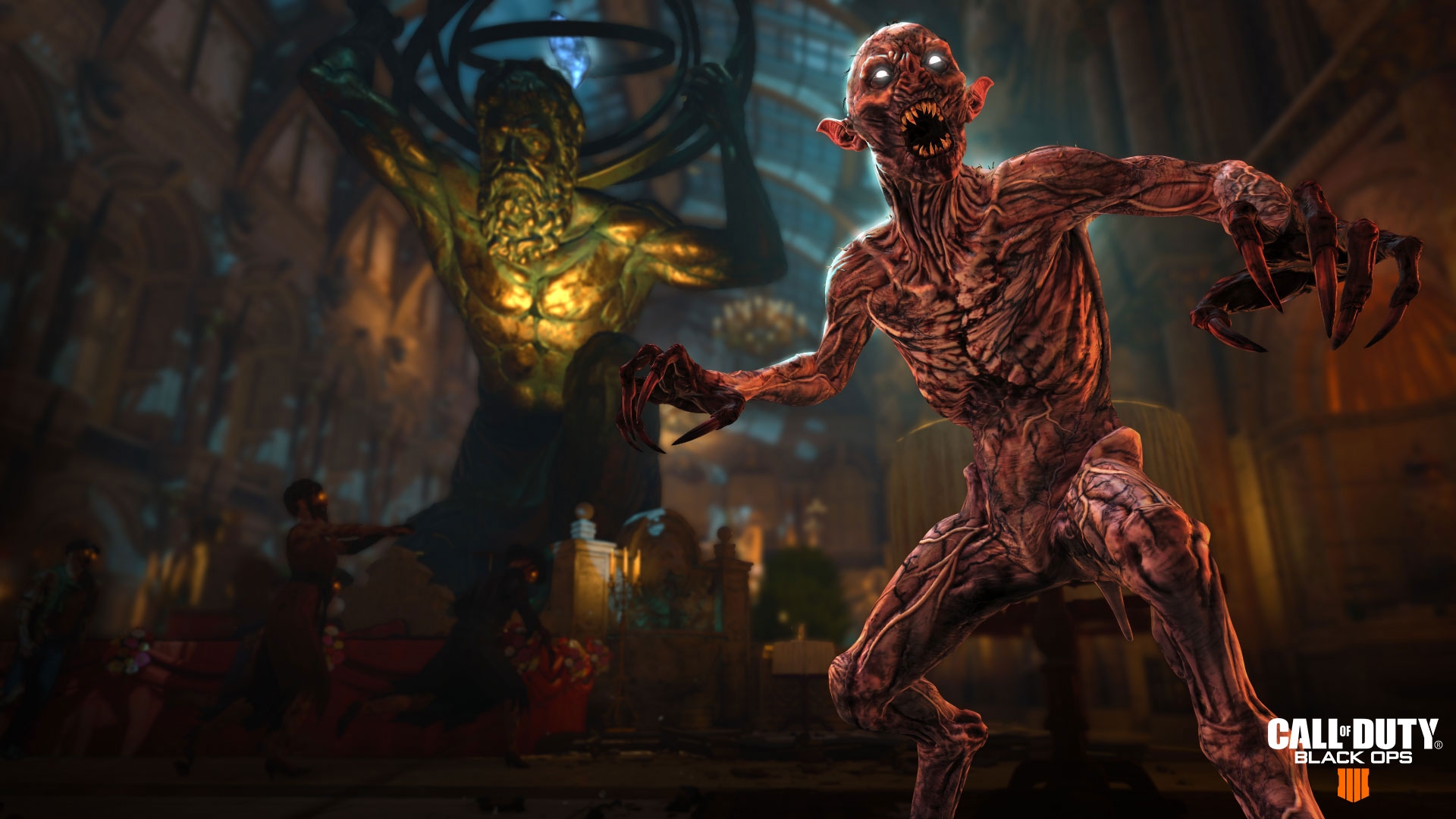 Beware the Super Blood Wolf Moon! Zombies fans can expect a lycanthropic fear-fest with this “Dead of the Night” Gauntlet. There are 30 rounds of frenzied challenges, where defending Alistair Rhodes’ mansion becomes increasingly hairier the longer you survive!

Browse the Black Market, now stocked with a variety of new content, outfits, and weapons featuring an assassin theme. There are also new Blackout Characters, and new item types – Weapon Charms and Death Effects. Highlights include:

New Signature Weapons: Get 25% more XP per kill with MKII Signature weapons now available for the Rampage, VAPR-XKG, Switchblade X9, and the Spitfire.

Weapon Charms: Personalize your weapon with ornaments like the ‘Lil Ray’ – a mini weapon charm of the iconic Zombies weapon.

Death Effects: Replace standard death effects with unique audio and visual effects like ‘Surprise Party’ which sprays confetti when you take out an opponent.

Special Orders: Talk to Blackjack to secure Misty, the MX9 Signature Weapon, the Centurion Epic outfit for Ajax, and the Valkyrie – Paladin HB50. These items are contained in bundles that come with a variety of additional contents from calling cards to Reserve cases, so check the Shop for all the details.

Masquerade: Weave through the bright and chaotic alleyways of a claustrophobic city market as you’re caught in the middle of an embassy under siege. Using a happy aquatic festival as cover, elite assassins have hijacked the parade floats, using them as battering rams in an attempt to breach an adjacent U.S. embassy.

Artifact: This large and full-terrain platform map features rock outcrops, deadly thermal geysers, slippery slopes, and ice caverns to explore. In the remote landscape of Iceland, hired treasure hunters have tracked down and unearthed an ancient zombie artifact. Unfortunately for them, they aren’t the only ones that want it.

Reimagined Multiplayer Map, WMD: Returning from Black Ops, this map features a mix of interior and exterior engagements, with a variety of catwalks, pipework, and ladders resulting in combat from every angle and range. On WMD, you are deep within the snowy Russia borders where a covert laboratory has spun up production of weaponized Nova 6 chemicals.

Expect more game modes, updates to the Blackout Alcatraz map, more outfits and a host of other content in the coming weeks as Operation Spectre Rising continues.

If you’re new to Black Ops 4, there’s never been a better time to dive right in with the  Black Ops 4 – Spectre Rising Edition. Purchase the digital edition to receive the following:

Operation Spectre Rising releases first on PlayStation 4 on April 30, with all other platforms to follow. For a more detailed preview of the Operation, check the Roadmap, visit the Treyarch blog, and check back here at the Activision Games Blog for more in-depth coverage.