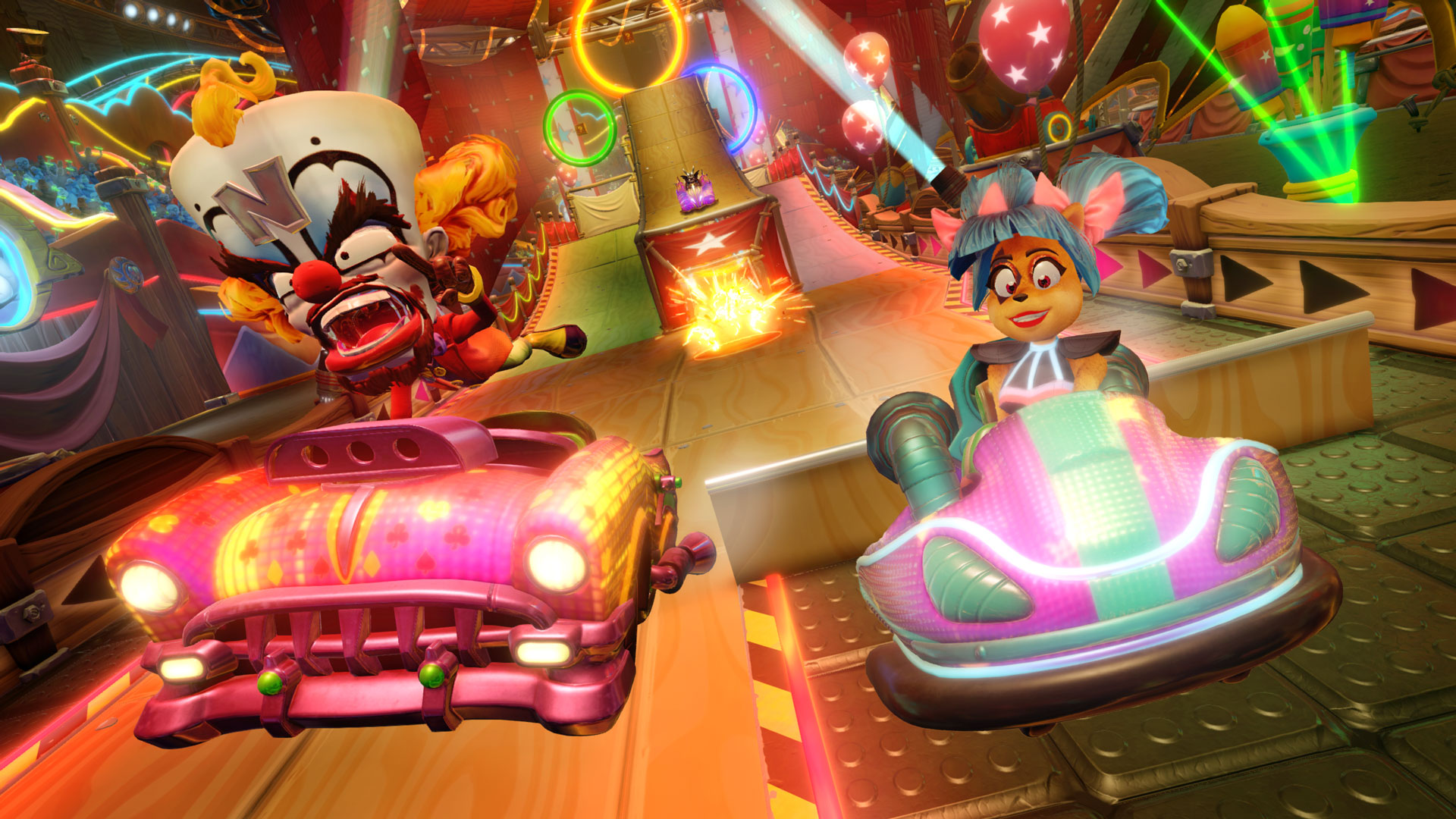 Start your engines racers, the fun and games are afoot in the newest season of Crash™ Team Racing Nitro-Fueled! Download the season update and join the Neon Circus Grand Prix for new characters and karts that can be earned by completing Nitro Gauge challenges or with Wumpa Coins in the Pit Stop, a new track, and an all-new game mode: Ring Rally. 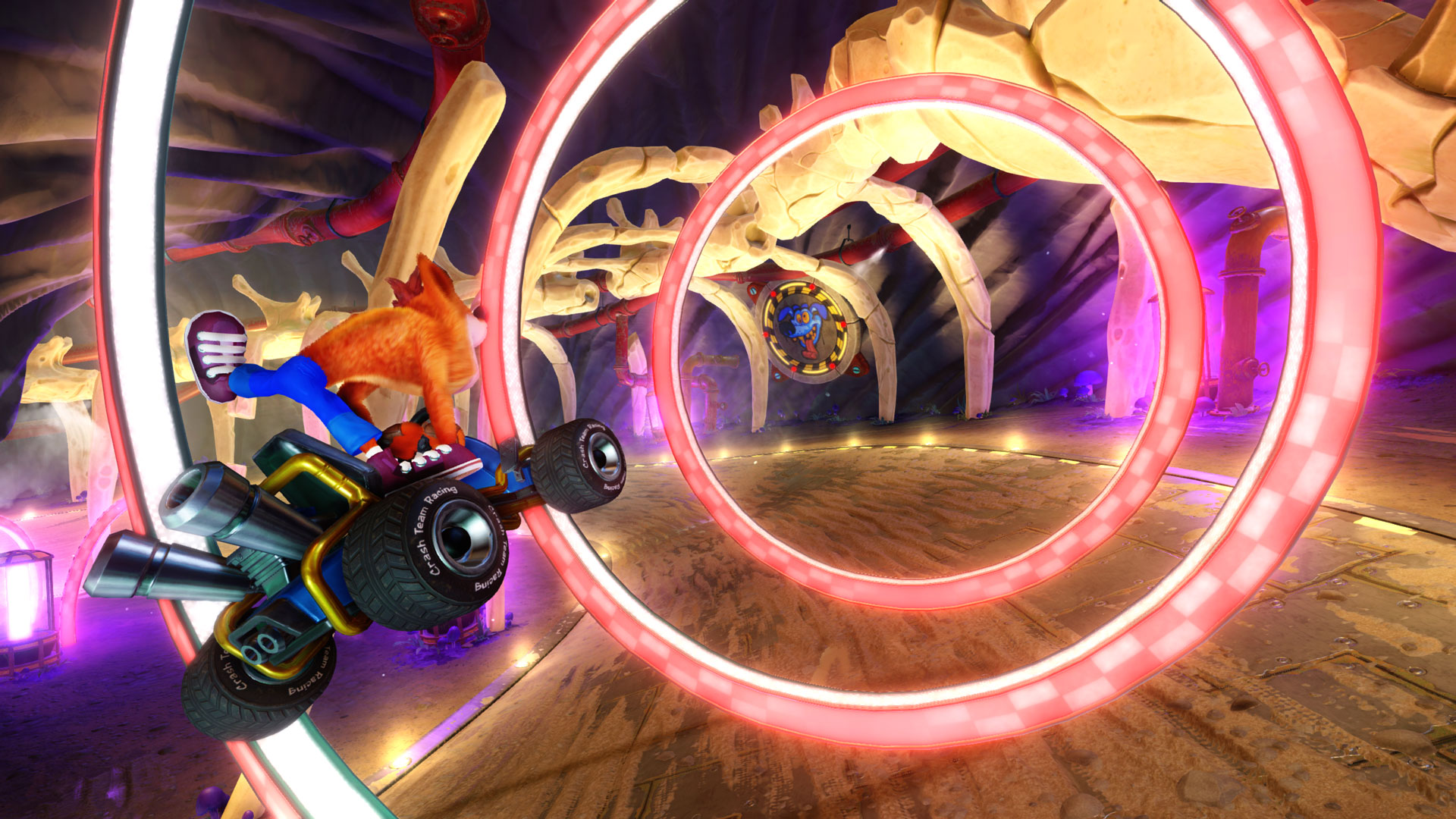 Master the Course in Ring Rally

Ring Rally puts you in the driver’s seat against the best – yourself! This Local Arcade mode is meant to put you to the test and hone your skills on each of CTR Nitro-Fueled’s tracks. A clock starts counting down as soon as you start on a track. Speed through the track, hitting the rings that have been placed on the most optimal route. Each time you go through a ring you get a speed burst, time added to the clock, and a number of points. With each lap, the rings get smaller, the challenge gets greater, and your point total climbs. The only end to a Rally is when the clock runs out of time, and the name of the game is seeing how far you can make it, and how many points you can earn.  It’s a test of endurance that will improve your skills, and there are several Nitro Gauge challenges tied to it – but the real challenge becomes, can you beat your own record?

This new game mode is making its introduction in this Grand Prix but will remain part of the game indefinitely.  Drive like a pro and utilize skills like drift to beat the clock in Ring Rally! 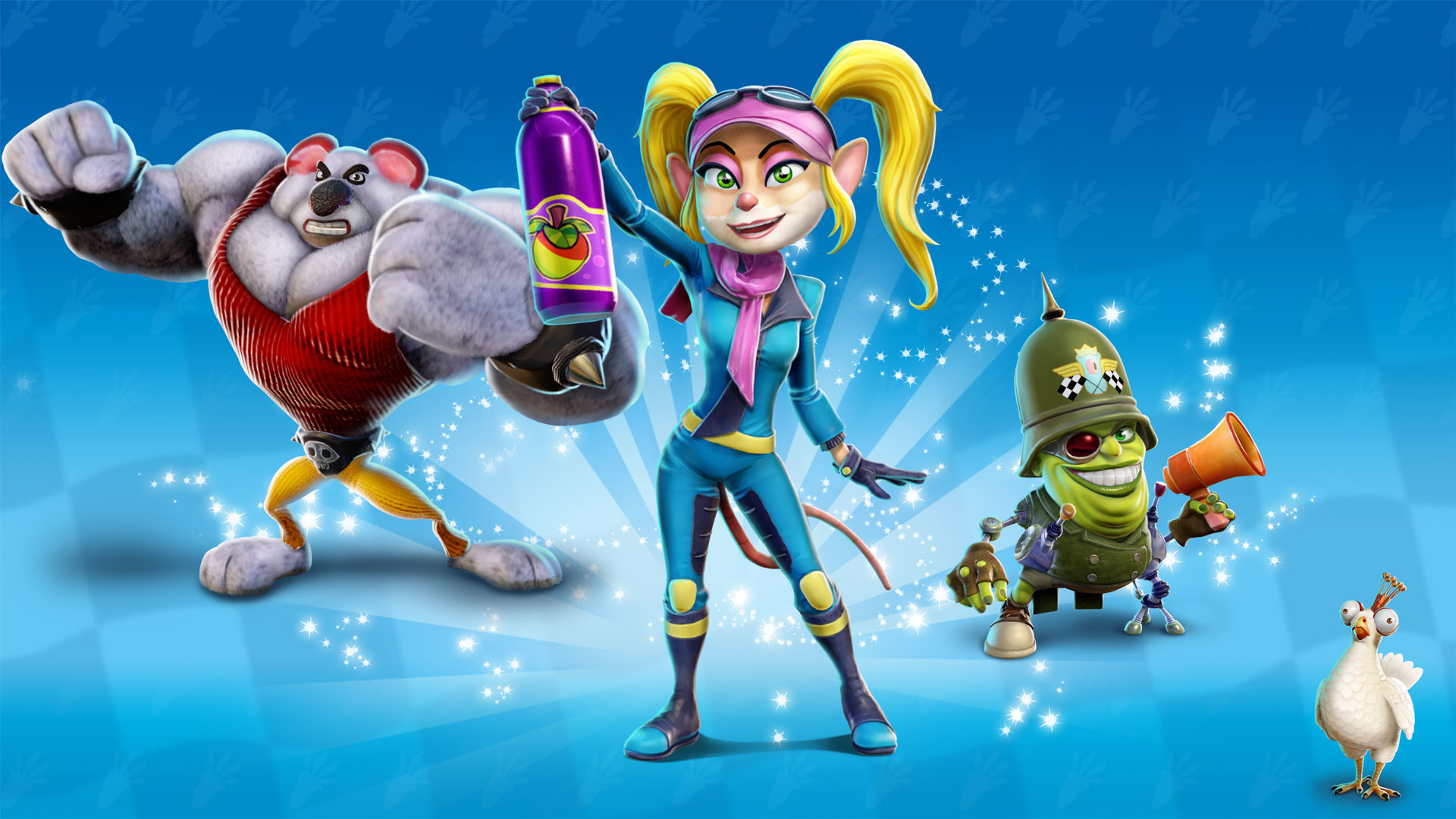 Load in with New Characters

A couple of the fan favorite original Crash™ Tag Team Racing drivers are back and ready to hit the road, plus a Crash universe baddie enters the show! In this season Pasadena O’Possum and Ebenezer Von Clutch join the Pit Stop rotation while a strongman fit for a circus, Koala Kong, headlines the Nitro Gauge reward set.

Plus, have you been keeping track of all the chicken Easter Eggs across the game’s various courses…? Well now when we say Easter Eggs, we literally mean eggs -- Golden Eggs, in fact! Starting this season there are Golden Eggs littered across the hubs of the Adventure Mode for you to find; one egg per hub. Collect them all and bring them to a very special fresco found in the Lost Ruins hub and unlock the racer with the most cluck around --King Chicken! 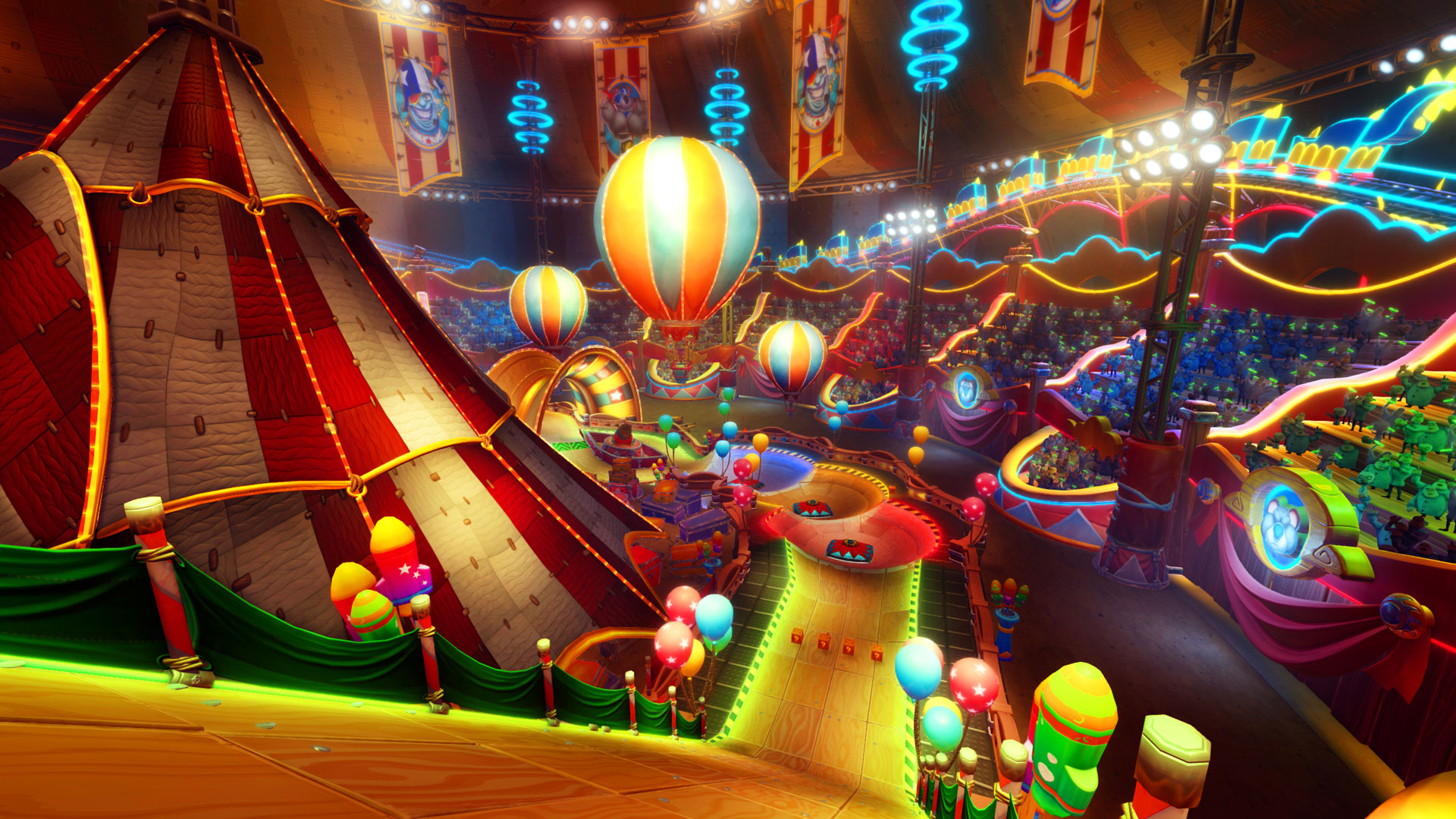 Experience a festival of colors and a celebration of the circus on the latest track, Koala Carnival. Koala Kong is the official master of ceremonies for this new track that’s a colorful and death-defying adventure. Zoom around this big top spectacle with your chosen racer, dodge the canons bursting around you, avoid the blasts of fire coming from the ground, and don’t let the spectacular colors distract you from taking the lead. Most of all, put on a show! 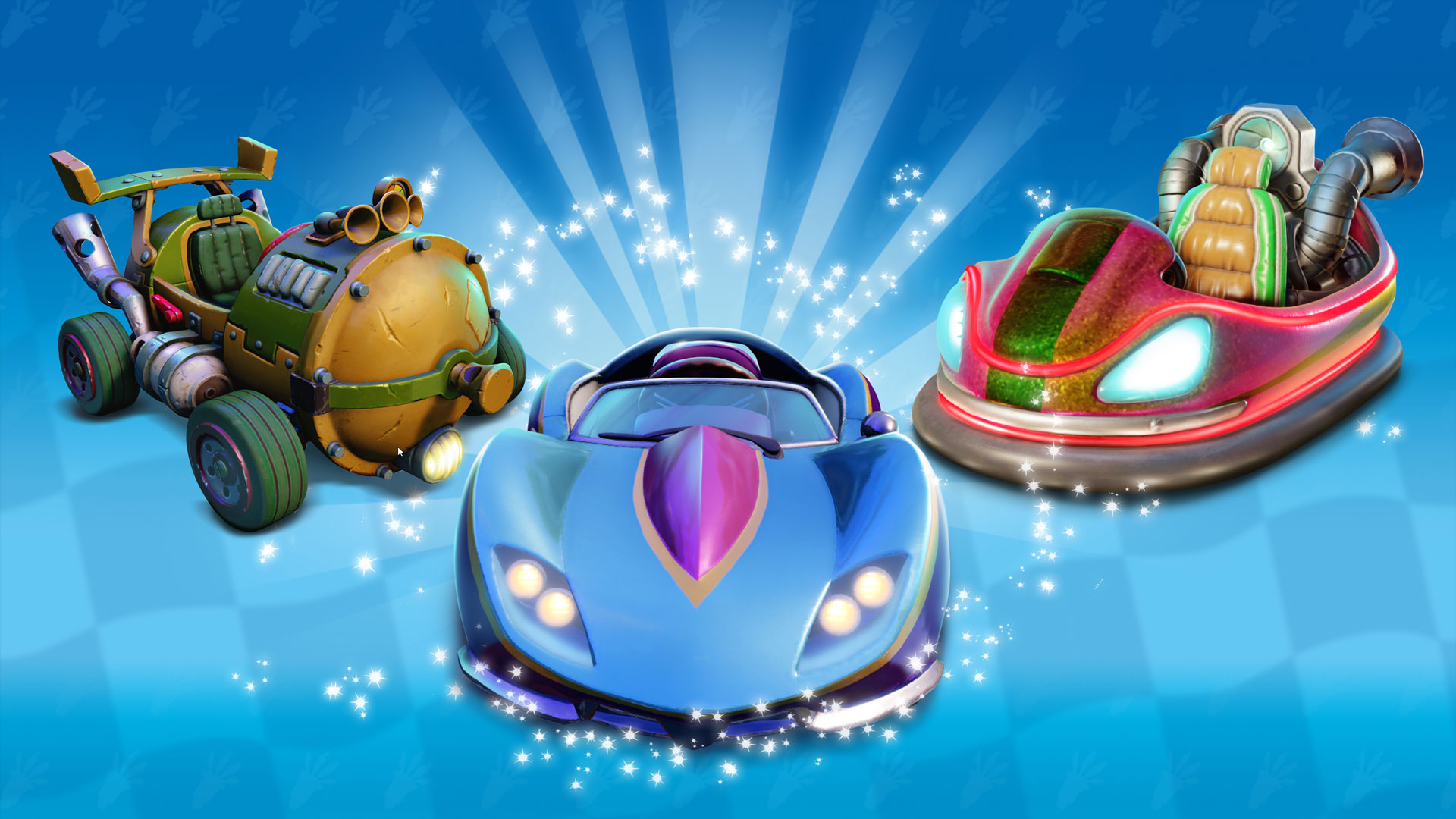 The Nitro Bumper Kart embraces the carnival theme while giving you an opportunity to race with the best of them - - pick this one up in the Pit Stop. Or embrace a throwback from the Crash™ Tag Team Racing days with the Pressurizer, earned through the Nitro Gauge. For those that like racing on the edge, earn the Daredevil in the Nitro Gauge and feel free to take some risks! 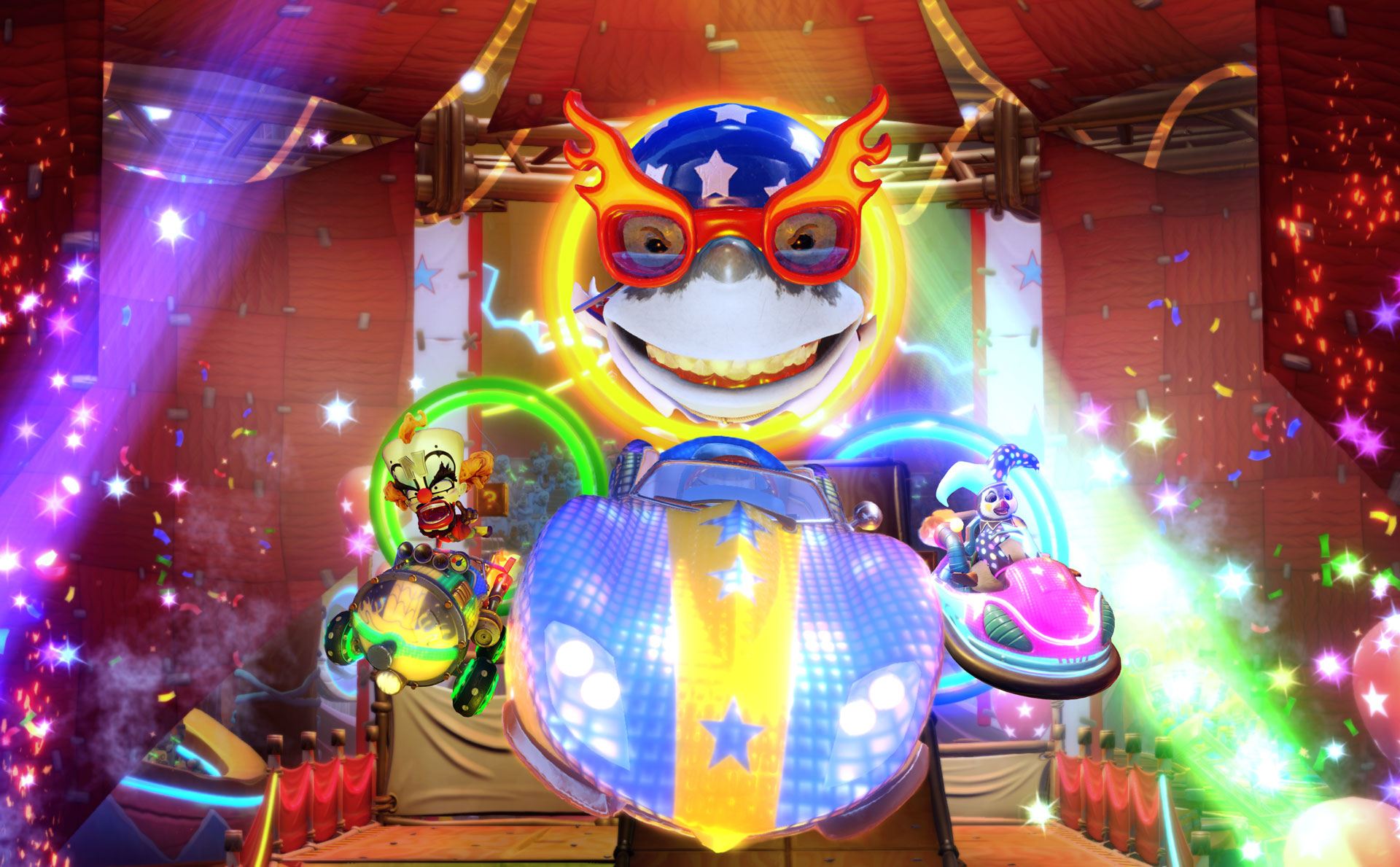 Need to refuel? Customize your kart and characters with silly, circus fun in the Pit Stop. Swing by for circus-themed skins, neon wheels, and an all-new Pit Stop item type, Animated Paint Jobs!

In addition to the amazing new content showing up in the Pit Stop this season, during the Neon Circus Grand Prix select items from the Back N. Time Grand Prix will make their return to the Pit Stop.  Miss out on some of that sweet prehistoric swag the first time around? Well, now you have your chance!

Finally, the first weekend of this Grand Prix season will introduce a new bundle type to the Pit Stop - - the Last Chance bundle. In case there are any remaining Spooky Grand Prix rewards you were unable to unlock in your Nitro Gauge this past season (and if you forgot to get the Nitro Fill Up to unlock them during this off-week), the Last Chance bundle will give you the ability to unlock those items even after the Neon Circus Grand Prix begins, all in one bundle featured in the Pit Stop.  And as with the Nitro Fill Up, the Wumpa Coin price for this bundle will be adjusted based on rewards that you have already earned.

This will be an ongoing addition to the Pit Stop the first weekend of each new Grand Prix.  From Friday through Sunday of that first weekend (typically 7AM PST on Friday through 7AM PST on Monday), players will have another chance to unlock any remaining items from the prior Grand Prix in one go with the Last Chance Bundle before select items are added to the Pit Stop rotation at a later time.

Typically, there will be only one Last Chance bundle at the beginning of each season and will contain any remaining rewards for the prior Grand Prix season that was immediately prior. However, for this weekend, we are offering two Last Chance bundles: one for the Spooky Grand Prix, and one for the Spyro & Friends Grand Prix. There were some items that were not displaying correctly during the Spyro & Friends Grand Prix Nitro Fill Up in early October, so we wanted to make sure players had another opportunity to unlock any of the remaining rewards from that season now, without having to wait for select items to make their way back to the Pit Stop at a later time.

So, there are a ton of amazing, electric, eccentric, spectacular new items in the Pit Stop this season, as well as some items making their return. Deck your kart and your racer in the big top, then head to the track and take off! 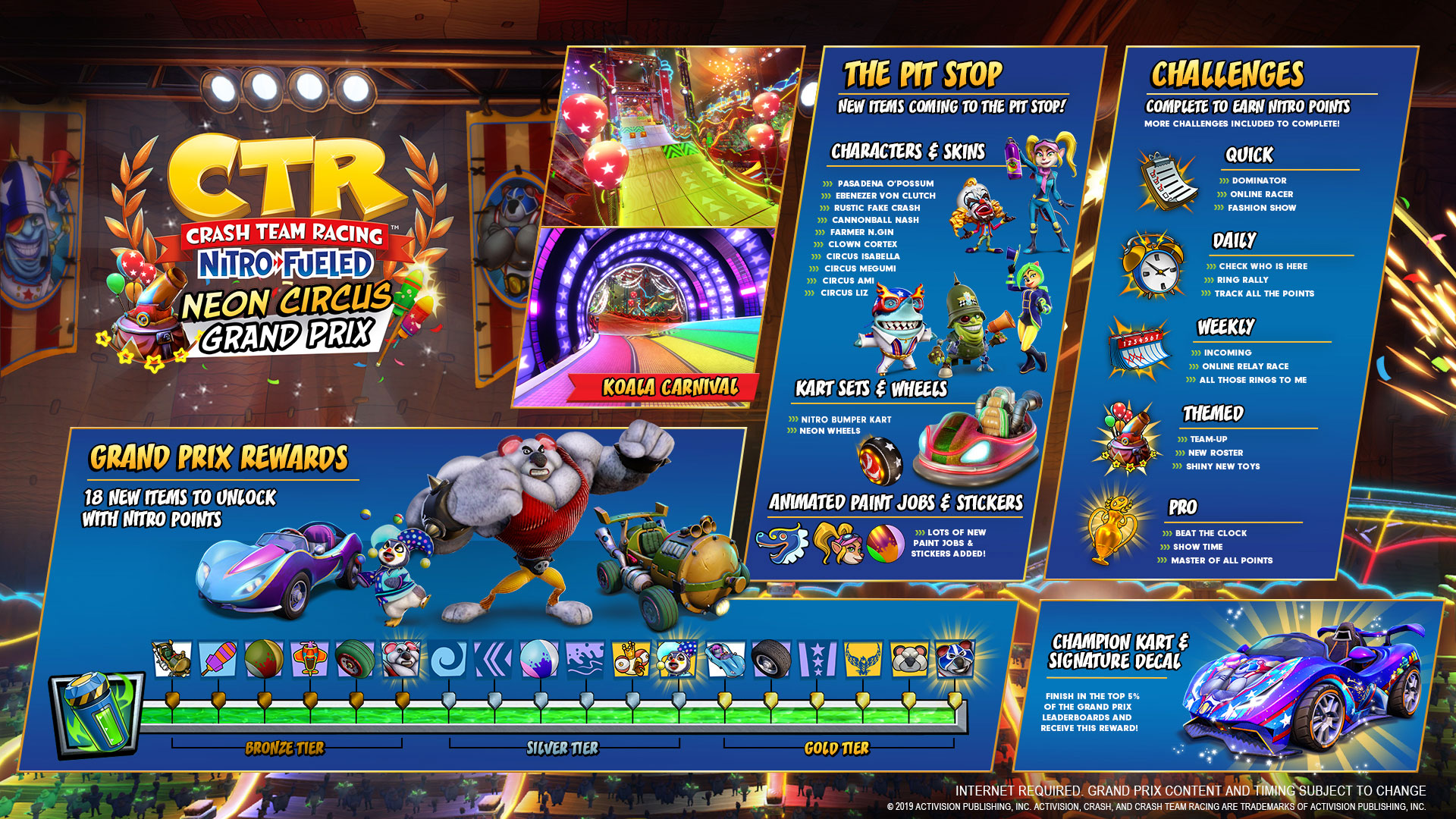 A Kart Fit for a Champion

Coast over the competition in this Grand Prix to the top 5% of either Leaderboard and win the Champion Kart (if you don’t already have it) and a Neon Circus signature decal!

Crash™ Team Racing Nitro-Fueled and the Call of Duty Endowment team up to bring fans a new kart for a good cause!