Learn All About Call of Duty: Infinite Warfare’s Zombies in Spaceland

We sat down with Infinity Ward’s Brian Bright and Jake Geiger to talk about this 1980s-tastic, theme park zombie adventure

We recently visited Infinity Ward to find out more about Zombies in Spaceland, which plunks you down in the middle of a theme park in the 1980s to fight the undead. Luckily, they didn’t hold back on the details… although sadly they did not disclose any of the games many easter eggs. You’ll have to find those on your own.

Activision Games Blog: At what point did the team decide there would be a zombies mode in Call of Duty: Infinite Warfare?

Brian: It was probably about April of last year when we started working on Zombies in Spaceland. We were working on other things in the game, but it was around April when some of us split off and we started getting the zombie A.I. working into our code base and getting it up and running, and shortly after the whole team moved on the project.

So the idea of having the setting be in a theme park was pretty early on?

Jake: It was fairly early. That was an idea that someone had thrown out, and everyone latched onto it because it gives us the opportunity to do whatever we want. We can do traps, we can do rides, we can go crazy with themes, we can make it a little more out there, and everyone really dug it. 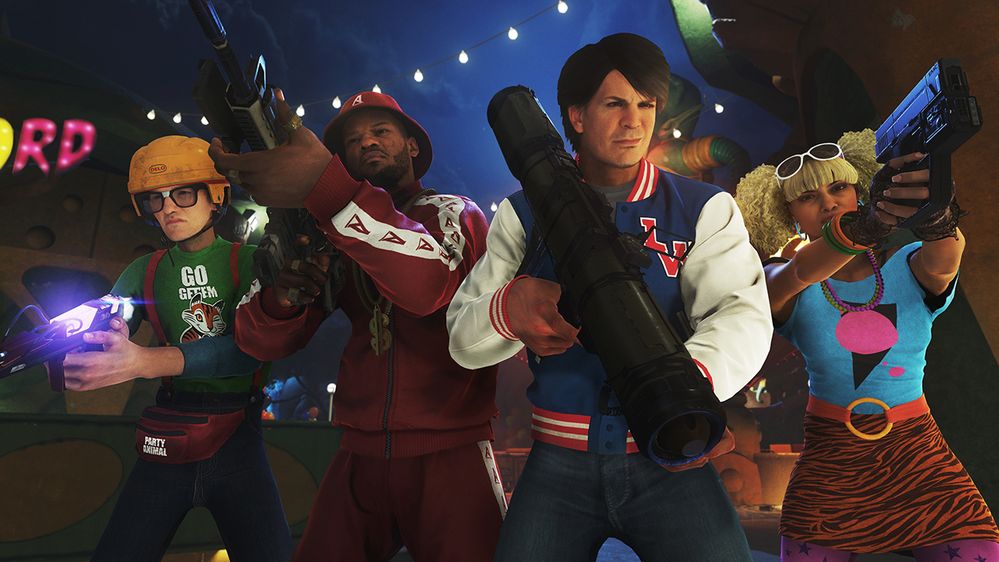 This is the first time Infinity Ward has created a zombie mode in a Call of Duty game. Where did you start?

Brian: We developed an animation and behavior tree system for this game where everything is very node based and visual. It basically just gives designers a lot more flexibility. It's a lot easier to add new behaviors. Previously, we'd have to go to coders and they would have to code up anything we wanted. Now we can do it all in the script and it's pretty straightforward.

What kind of research went into the theme park design?

Jake: We had various people on the art team who did trips to a bunch of theme parks. That got everyone on the same page about where we were going. It got people into the mindset of making it a little more fun and crazy. We wanted to make it our own by making it a bit more campy, to push the craziness a bit more.

Brian: We had to find our own creative space, and find out what would resonate with people. We wanted to try and bring in new players who haven’t been exposed to zombies or who weren’t interested in the horror aesthetic.

Early on wanted to design a storyline that would allow us to jump around in time and place. So, we put our chips on the 80s for the first one. So it has that 80s vibe and style, and it is perhaps slightly more forgiving but has a ton of depth and easter eggs to maybe bring in more players as well. 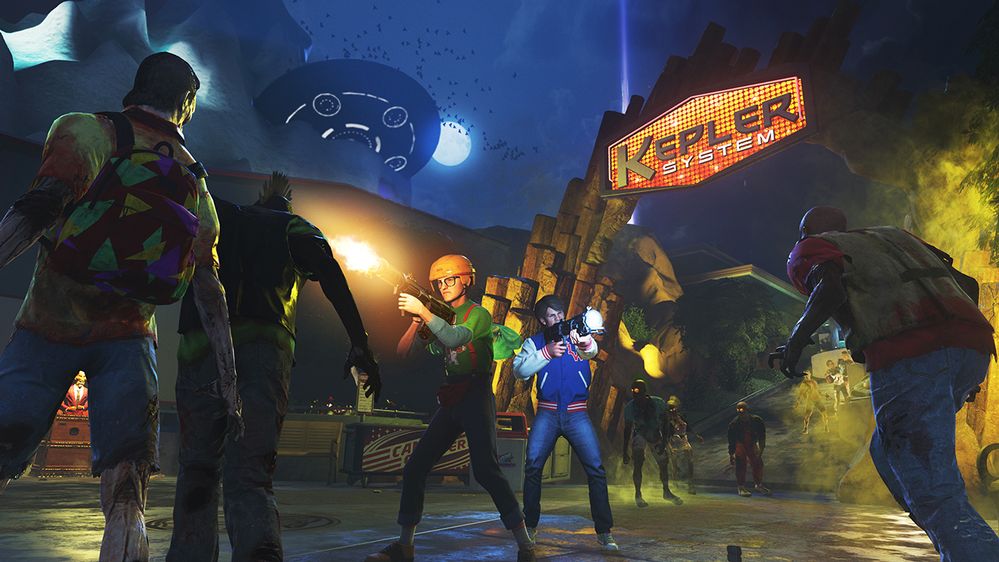 How did you design the employees-only portions of the park that appear in the game?

Jake: It was mostly a lot of reference photos and reference gathering online. In the past we’ve done reference trips in the past to factory-style locations and we ended up leveraging a lot of that to build those areas out.

Brian: Plus, there’s all kinds of easter eggs in there. Jake would go in and take photos of the team and put them up as “employee of the month” and so on. If you look around, you’ll see a lot of people who worked on the game.

Jake: We even have caricature stands and 80s style posters in the park with images of people from the team so that, if they wanted to, they could be in the game.

Brian: Also, we designed the map so that it would play circularly, around the main hub. So from any one of the main spokes you could circle around without having to go back to the main area. About halfway through, Brittany (Brittany Maxey, Zombies in Spaceland designer) decided to add an underground.

Jake: Yeah, it developed from an, “Oh crap, we need a way to get from one side of the map to the other quickly” mentality. Brittany proposed doing a sort of underground area, and people proposed doing it like the employee tunnels and it evolved pretty quickly from there. 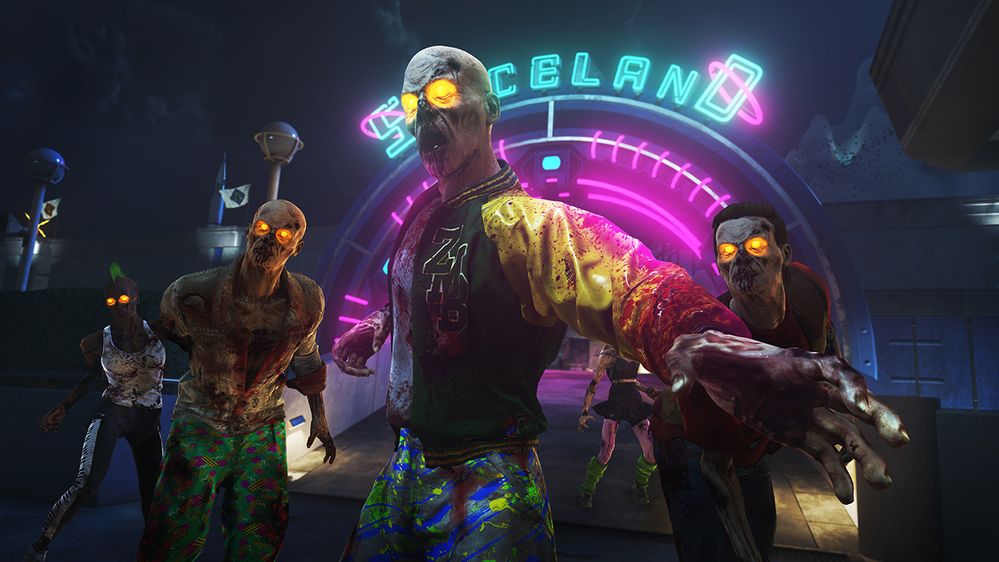 The 1980s era turns the theme park into a sort of visual neon fever dream. When was the decision made to go with that time period?

Brian: It was early. We were kicking around ideas about like a rock band on a stage when the zombie apocalypse happens in the mid-80s. So we had ideas about the Cold War era and all of the huge music festivals which were popular at the time. We were riffing off that back and forth, so we kind of knew then that we wanted to do 80s, and then we ended up framing it with the movie theater and Willard Wyler, the projectionist.

What went into choosing the 80s music?

Brian: I worked on the soundtrack and took a lot of suggestions from people. I tried to capture the decade and make it well-rounded. I like hits, but I also like to get more obscure stuff as well. You want to reel people in, but also educate them a little bit.

A lot of the new weaponry from Infinite Warfare is in this mode, but you also got to design a lot of over the top, crazy weapons. What was that like?

Brian: That’s a lot of fun. We have some standees throughout the game that show off weapons like the Shredder and the Headcutter and the Face-Melter. Those are cool because once you find the pieces. Each one looks like a cool laser tag gun with bells and whistles and glowy bits and effects emanating from it. One of them will make the zombies breakdance, one of them will break their legs off and put thrusters in them so they fly into the sky and explode like fireworks.

Making weapons is fun, and we’ve added some new things in the engine this year with Infinite Warfare, so we have beam weapons, energy weapons and charge weapons where you can charge a shot. Plus, we can now impale zombies with a gun, impale them on a wall, launch them halfway across the map, and so on.

Jake: That seems to be how a lot of our stuff starts. It’s like “We’ve got this new tech… wouldn’t it be cool if we killed zombies with it this way?”

Brian: As long as it’s fun and seems like a cool way to kill zombies, then we’ll just do it. 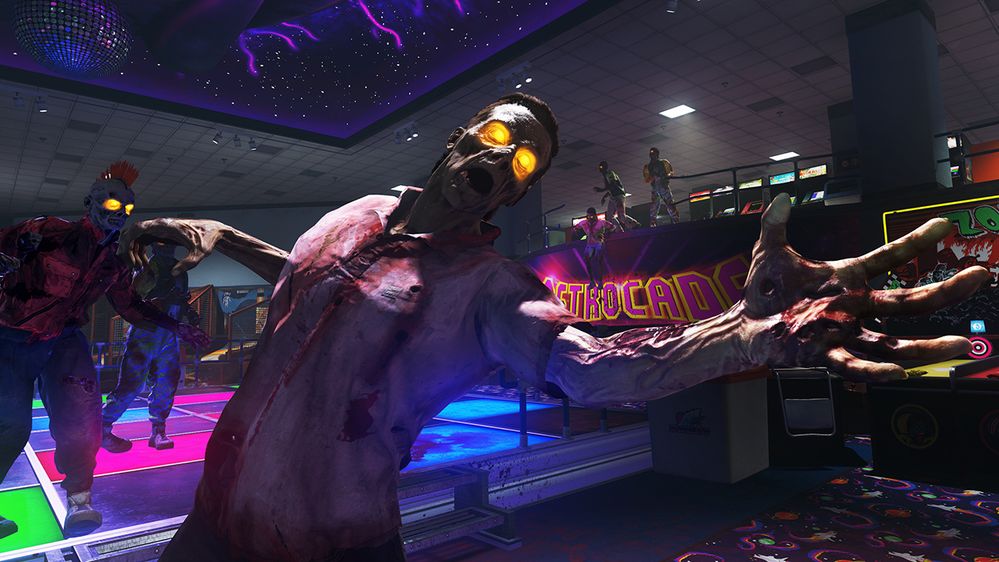 The Zombies modes are known for their major easter eggs What was it like designing those?

Brian: There is a lot of time involved in those. It’s just coming up with a mixture of puzzle aspects, finding items in the world, and then stringing them all together in some way that is relatively coherent. But it’s a lot of fun because we knew we wanted to have a certain in-game event happen, and designing the lead up to that was fun. In fact, one of the easter eggs is pretty obscure, and maybe nobody will find it.

Jake: It’ll be something we see on YouTube a year from now that somebody finally found it.

For people that haven’t seen Zombies in Spaceland yet, what’s new?

Brian: We’ve got a lot of cool stuff, and we have a lot of stuff to help bring new players in. One is, if you’re playing solo, we have an optional interactive tutorial that is almost pop-up video style which you can turn on. If you walk up to the Spaceland park map, you can enable the guided tour so that when you walk past certain things the game will pause and tips will pop up.

We also have the Afterlife Arcade. Willard Wyler’s Afterlife Theater, where the game starts, that has an arcade in it. When you die, you get warped back to the theater which is not set in the 80s, it’s in the present day.

There’s a bunch of arcade games in there, including old Activision games like Pitfall II and River Raid II and Barnstorming and others. There’s even basketball and a “Bowling for Planets” game and shooting galleries and so on. You can earn “Soul Power” while you play to earn a token that will get you back into the game faster. Of course, you can also spectate if you want to. 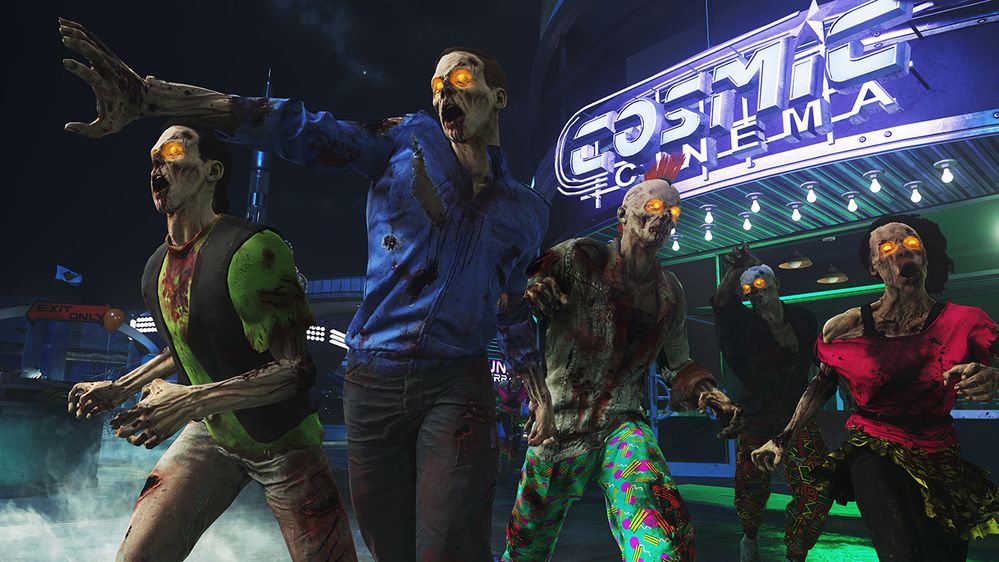 There’s also the “Astrocade” on the map, which is the theme park’s arcade. There are games in there that you can play as well, and playing those will allow you to earn tickets. You’ll see booths around the map that say “Weapons from the Future!”, and those have cool left-bumper powers.

Some of those weapons are influenced by weapons from multiplayer, and some are unique to Zombies in Spaceland. You can buy those with the tickets you earn playing games, or by shooting targets on the roller coaster, or by finding our in-game robot N31L and completing challenges that he’ll give you.  The tickets will get you cool stuff.

We also added a Lost & Found, because it sucks to have no guns when you come back. Especially after you’ve leveled them up and Pack a Punched them or whatever. Now you can buy them back at the Lost & Found, although you have to run all the way back to the front of the park do that, and that can be dangerous.

And that’s just in-game stuff. Out of the game, we have new progression metrics. We brought back the weapon build kits that Treyarch had in their Zombies game where you can customize the guns on the wall. We also share XP with the regular multiplayer. So if you like say, a particular shotgun and you use it a lot in Zombies in Spaceland, you can level it up in multiplayer. You also can unlock attachment slots, so as you level your guns up in MP or Zombies in Spaceland, you can open up slots to attach things.

Then there are Fate and Fortune cards. Fate cards are permanent; Fortune cards are timed. You obtain them through supply crates, and they are consumables you can use in-game. You can set up your deck of five cards at the beginning of the game, and when you earn money or spend money in the game your card meter will fill. When that meter is full, you can select one of your cards, and then hit R1+L1 to activate it.

Once you’ve used all five cards, you can go to one of the Fortune Tellers in the park and replenish your deck for in-game currency. It’s our way of riffing on Treyarch’s GobbleGum system – some of them are pretty powerful.

So there you have it straight from the source, and we’ve barely even scratched the surface of Zombies in Spaceland. Good luck exploring the 1980s theme park while staying alive, starting on November 4.