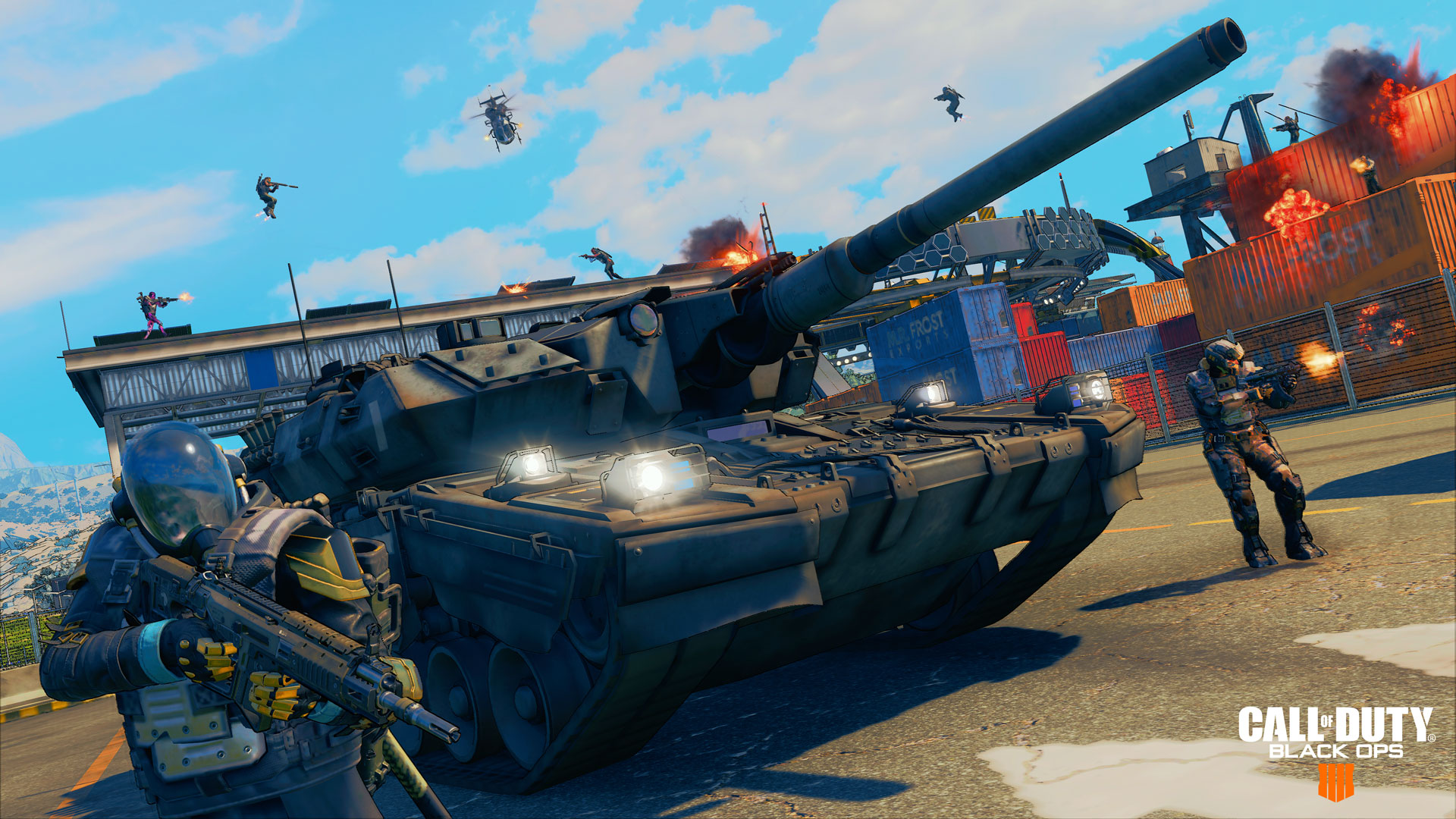 The Blackout map is back in living color with an action-packed limited time mode that turns you into a comic book hero! Read what has changed on the map since the apocalypse, as well as some tips for the brand-new game mode.

Jump right into the pages of a comic book and assume the role of a real hero as part of Operation Dark Divide’s limited time game mode, “Heavy Metal Heroes.”

The original Blackout map has survived the apocalypse and has many sunny days ahead. But in Heavy Metal Heroes, the bright map has a comic book aesthetic to anchor the look of this heroic mode. Thick black cel-shaded outlines make everything from Hydro Dam to Nuketown Island pop with even more color, including your character.

What else does Heavy Metal Heroes bring to the table? How can you become a super soldier within this game mode? Will you conquer this limited time game mode and become a Heavy Metal Hero? Read on to see our tips for the new game mode. 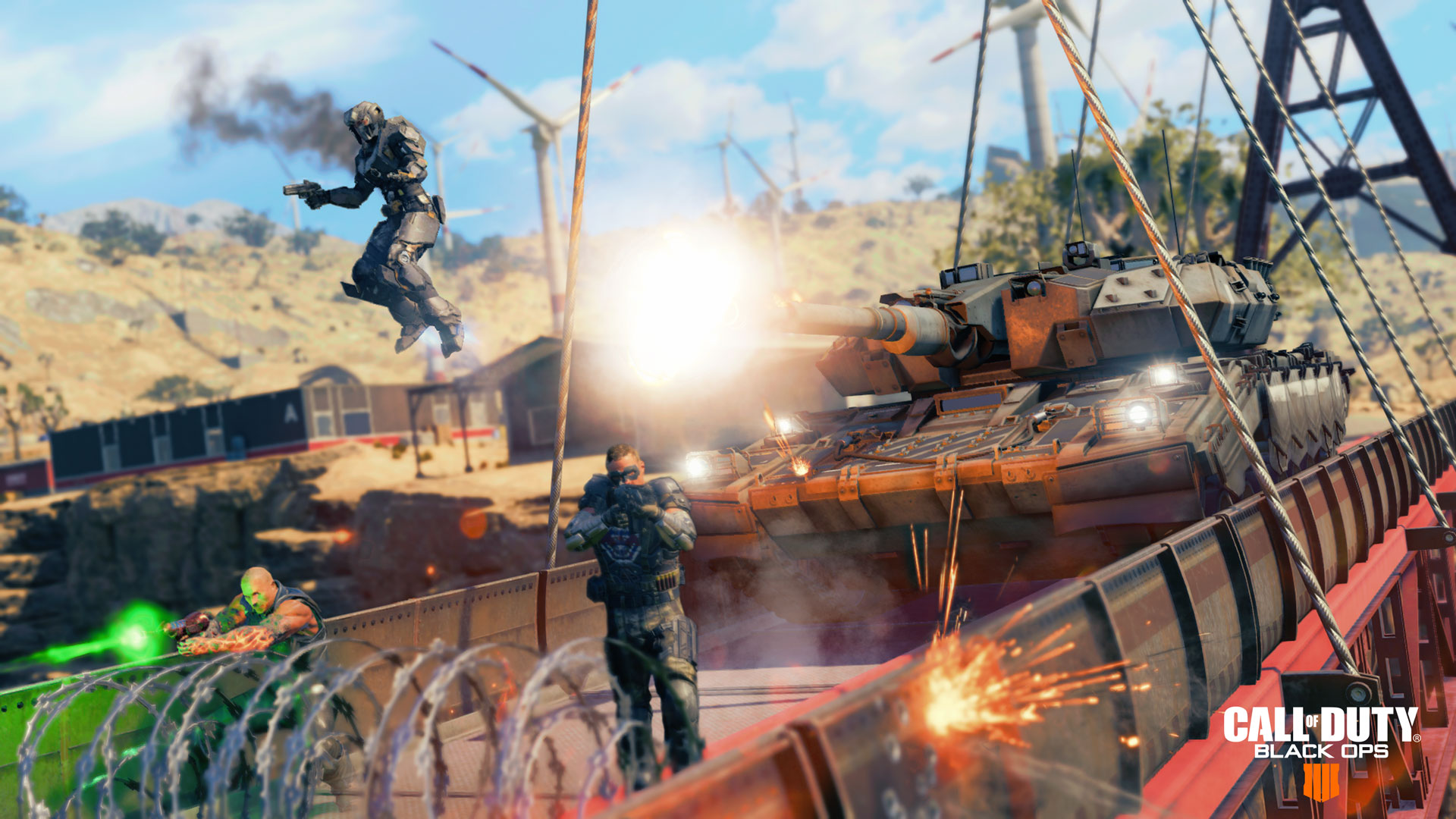 An Arsenal Fit for an Origin Story

Not only does your character have a fresh coat of paint, but you will also have a starting loadout. All players drop into Heavy Metal Heroes with a Daemon outfitted with a few attachments, Level 2 Armor, 10 First Aid Kits, 5 Armor Plates, and Backpack. Plus, players have unlimited use of the Grapple Gun so they can quickly get across the map in a flash.

You will need to loot up to find other attachments, equipment, health, and the weapon that fits your playstyle. However, you can think of these starting items as your “origin story”. Every hero starts somewhere on their path to greatness and in Heavy Metal Heroes that path starts with Armor and an SMG.

You Got Boost Power!

What’s a hero without some flying?

Thrust jumping gives every player the ability to boost up and over enemies. This adds a layer of verticality to the already fast, frenetic, and fun Blackout experience. For veterans who played Black Ops III, the movement will be familiar.

Bear in mind that thrust jumping has its limits. While you will get “air”, it will be temporary. At the bottom of your HUD, a meter will display that shows the amount of gas left in your tank. After thrusting to maximum height, your jump has to recharge before being used again.

Consider using this new ability to find new ways to enter and exit buildings, attack enemies, evade oncoming fire, or getting to previously tough to reach spots on the map in a single bound.

While thrust jumping across the map you will come across Heavy Metal Heroes variants (added boost capability) of vehicles: ARAVs, ATVs, motorcycles, Attack Choppers, and a new vehicle; the HBT-1B.

The tank is a massive armored assault vehicle with a large caliber cannon. One well-placed shell from this gun can reduce a smaller vehicle to smithereens or decimate an entire Quad.

Keep your eyes peeled for enemies and enemy vehicles while driving the tank, as its cannon will become the primary line of defense against anyone that’s jealous of your cool new toy.

The HBT-1B also comes with an exterior commander seat that a buddy can hop into and provide secondary fire. While in this seat, any weapon in a player’s arsenal can be used, although some weapons may fare better in the gunner’s seat than others.

Consider bringing along a Light Machine Gun for suppressing fire if you are asked to man the commander’s seat, or, should your Quad opt for complete destruction, take a Hellion Salvo Operator launcher which are specially outfitted to take out the armored vehicles you will come across in this mode. 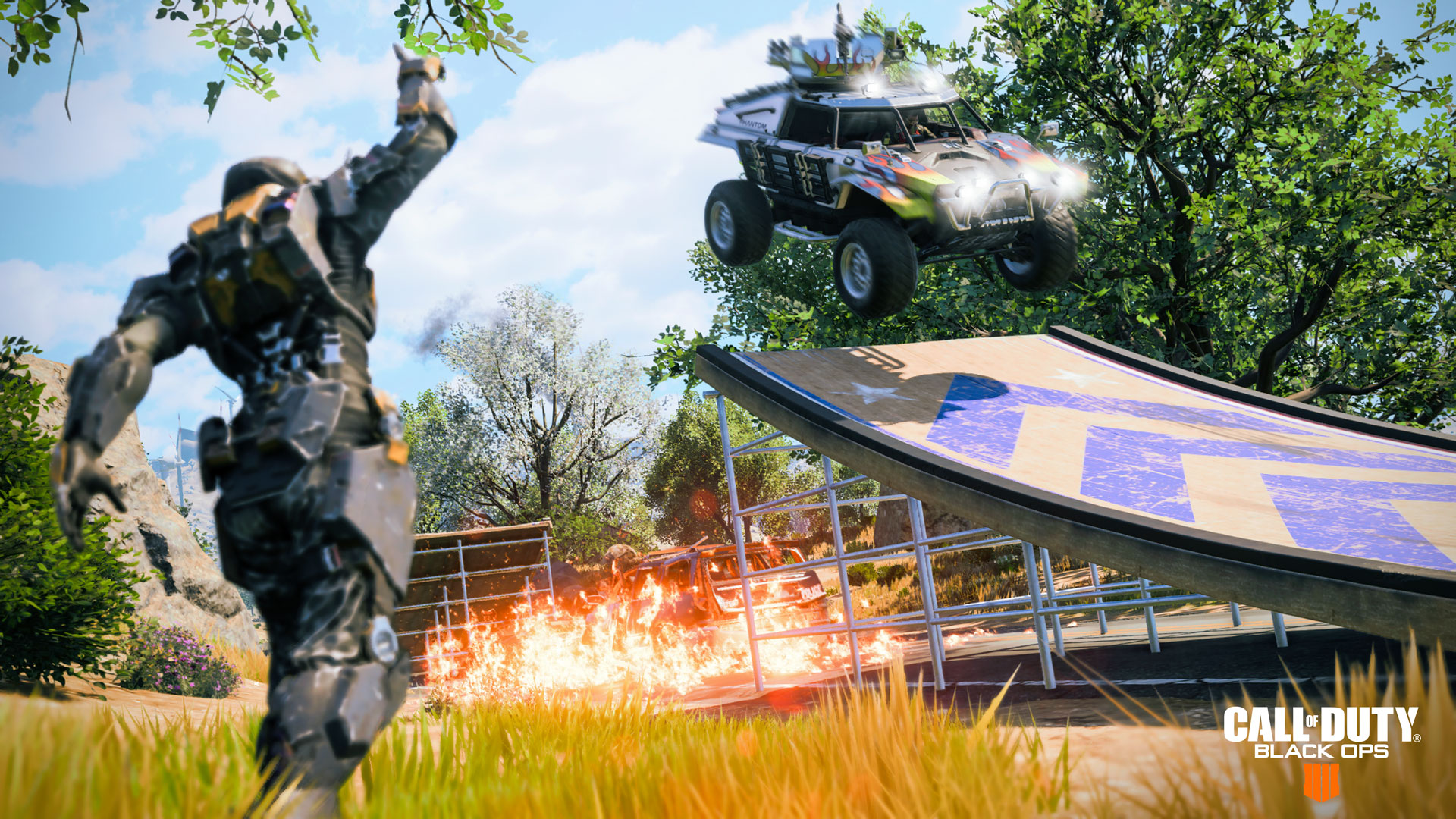 A Bit of Flare in Your Loadout

Can’t find an HBT-1B? Not to worry; just search around the map for a Flare Gun and have one personally airdropped to you.

This equipment piece can be great on any loadout, as it provides a free vehicle drop on command. Consider a scenario when an enemy Quad seems to have the upper hand, then once your HBT-1B arrives your team can turn the tides.

Consider using the Flare Gun with caution. Everyone else on the map can potentially see the flare and supply drop in the sky and make their way towards you to steal your tank. On the other hand, dropping a tank could be a strategy you use to bait enemies.

Catch Some Sick Air with Ramps

Another unique feature exclusive to Heavy Metal Heroes are ramps that are scattered around the Blackout map.

These ramps can lead to some sick tricks with an ATV, muscle car, or other land vehicle, but can also be used for evasive maneuvers. Generally, it’s more difficult to hit a moving target, so pulling off a gnarly stunt using one of these ramps could throw off enemy fire.

Of course, with anything as extreme and radical as a ramp in real life, it’s best to exercise a bit of caution with ramps in Blackout. Losing control on one may result in a bit more than a few bumps and bruises, so don’t go too crazy pulling off flips on them, lest you be pinned down to the road.

Down, But Not Out

Like other limited time modes modes, Heavy Metal Heroes allows players to redeploy at certain points if other members of their Quad are still alive. When you drop back in the map, you will still have a starting loadout but it will de-escalate in strength the more times you redeploy, i.e. less effective weapons, Level 1 Armor instead of Level 2, etc…

The longer you stay alive; the stronger your inventory can be. Consider dropping in close to teammates or together with a redeploying teammate to gang up on singular enemies..

Death may be inevitable when playing Blackout, especially within Heavy Metal Heroes. If you are the sole survivor in a Quad, consider playing cautiously to allow teammates to respawn. That way, your team could get back into the game at full strength… rather than being the last soldier down and ending your Quad’s run at a victory. 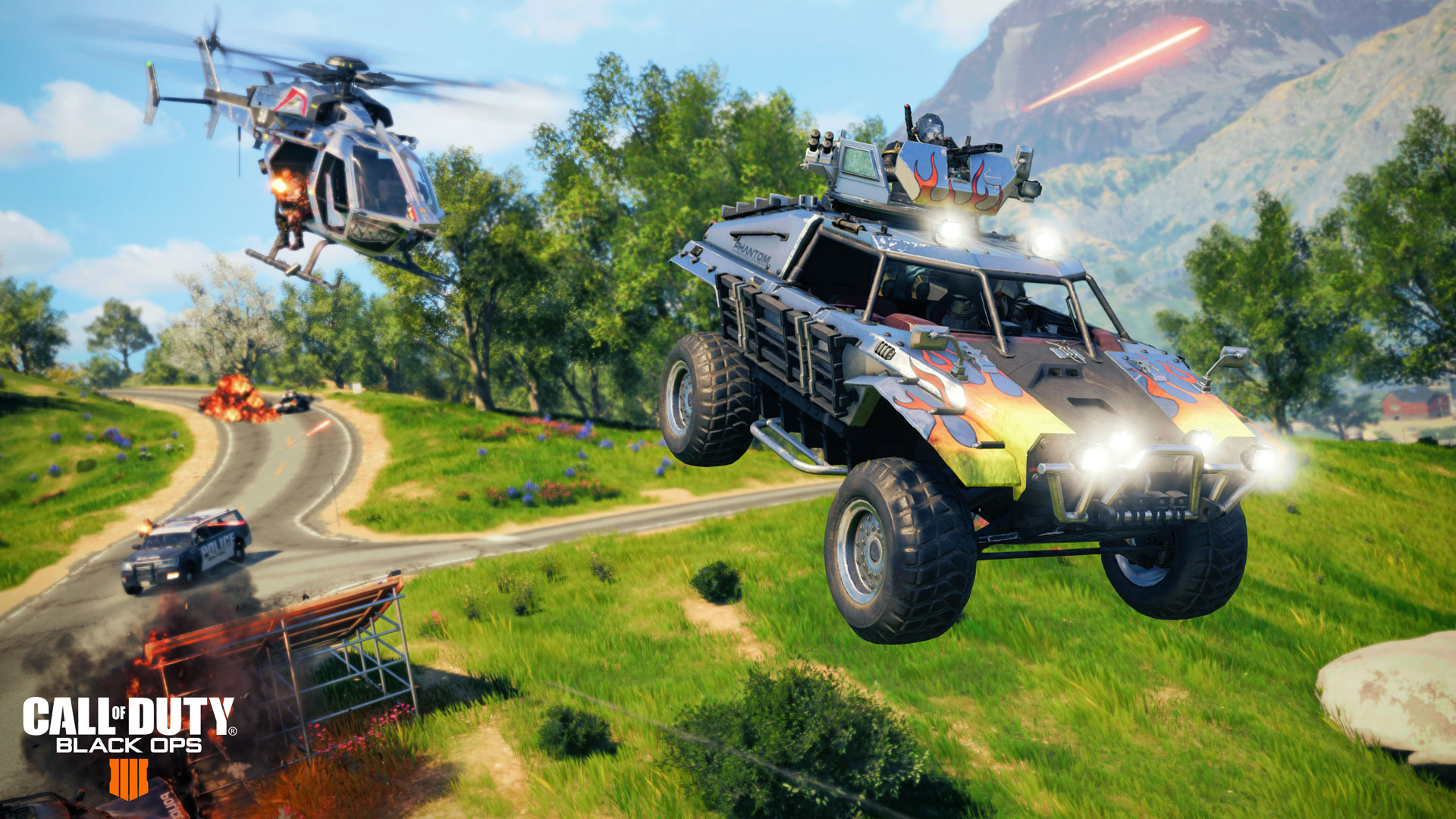 Speaking of playing for your Quadmates, playing together has a team will be key to victory in Heavy Metal Heroes.

When playing Blackout, consider using the in-game chat features to communicate where enemies or loot items are, or mark the map to share potential drop locations or where you plan to go next. Consider bringing along some buddies and party up for Heavy Metal Heroes and some serious Blackout victory hunting sessions.

Whether you are ready to soak up the sun once more in regular Blackout matches or are ready to become a Heavy Metal Hero, we hope you enjoy the Blackout updates of Operation Dark Divide.