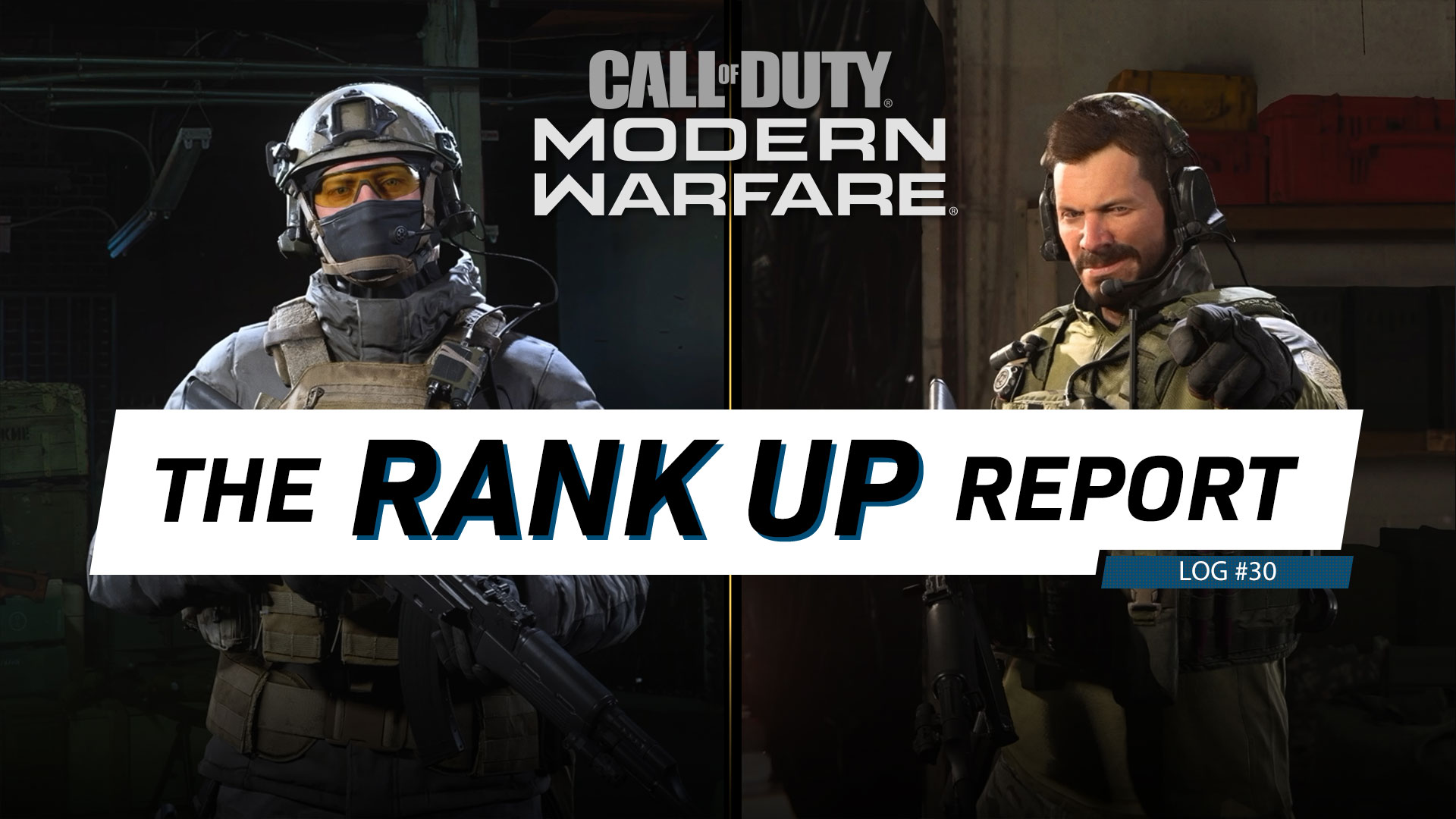 The Rank Up Report #30: Tips for Completing the Hardest Season Three Officer Challenges

The Rank Up Report #30: Tips for Completing the Hardest Season Three Officer Challenges

The sun is setting on Season Three, which means time is running out to complete all 100 Officer Challenges before you miss out on exclusive emblems and bragging rights.

No time to waste – let’s get to Ranking Up:

This week, I featured Bale in his Epic Protectorate skin, found in the Security Detail Store bundle. He looks like he’s ready to successfully protect a few Spetsnaz officers, especially with that War Saw assault rifle blueprint included in the bundle (and what both my Operators are holding). 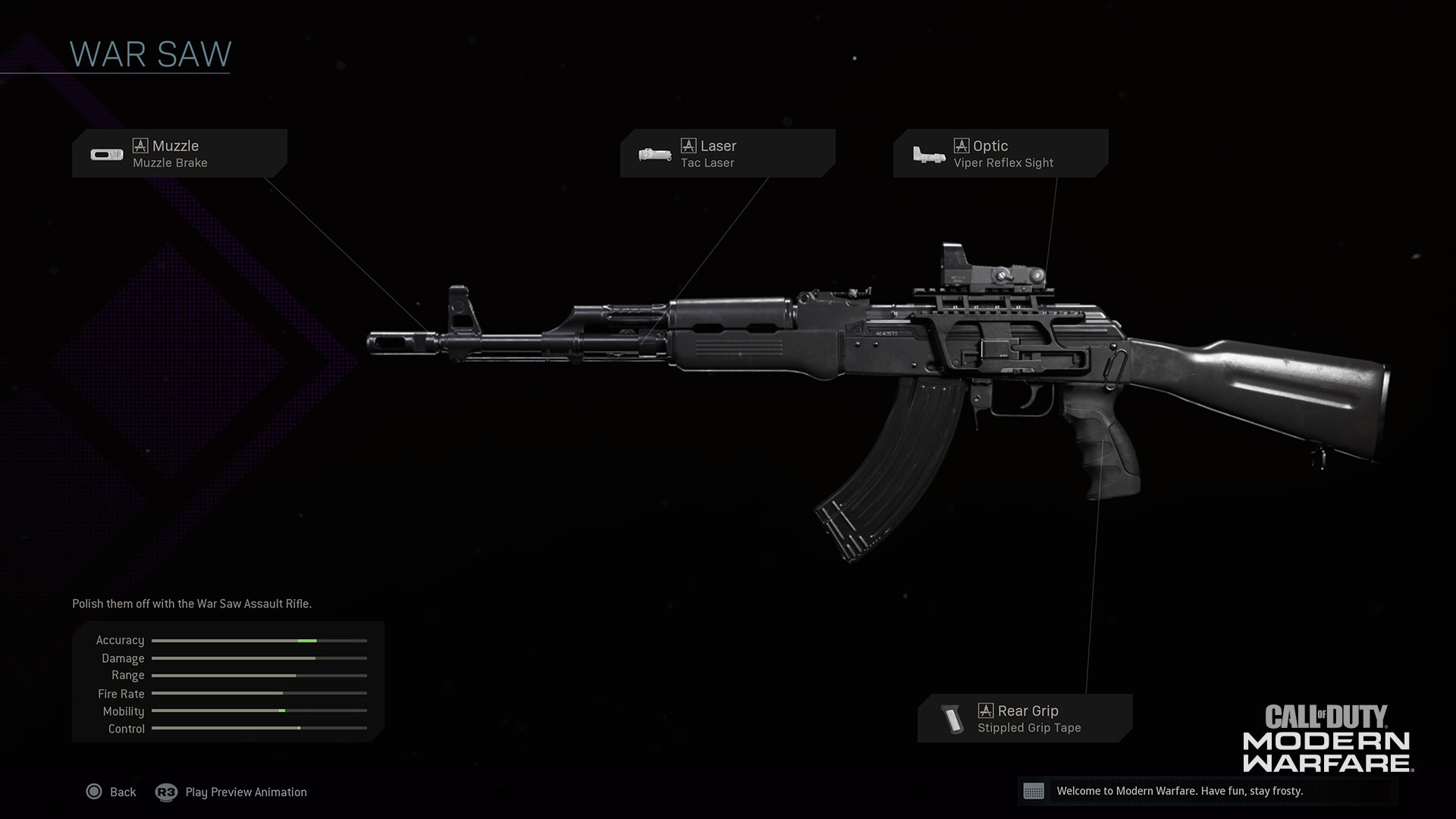 As for my Coalition Operator, I chose Alex in his ‘Back for More’ skin, his final unlockable skin in Season Three achieved by reaching Tier 100 in the Battle Pass and completing his second batch of Operator Missions.

Once again, I reached full completion of Season Three, both in the Battle Pass and my Officer Challenges, which brings us to this week’s Top Rank Up Tip:

100 Officer Challenge Ribbons is always a beautiful sight at the end of a Season.

Want to follow me in getting a full ribbon page for Season Three? As per Rank Up Report tradition, here’s the advice I have for completing 10 Ribbons that may be giving you trouble out of the last 50. For this edition, we’re going to do a lot of “stacking,” as I will be bundling a few challenges together in this guide to show you how to efficiently clear multiple challenges at once.

Remember: Marksman rifles kill with a single headshot, with all but the SKS having that feature at any range. High magnification optics are recommended for precise shots. 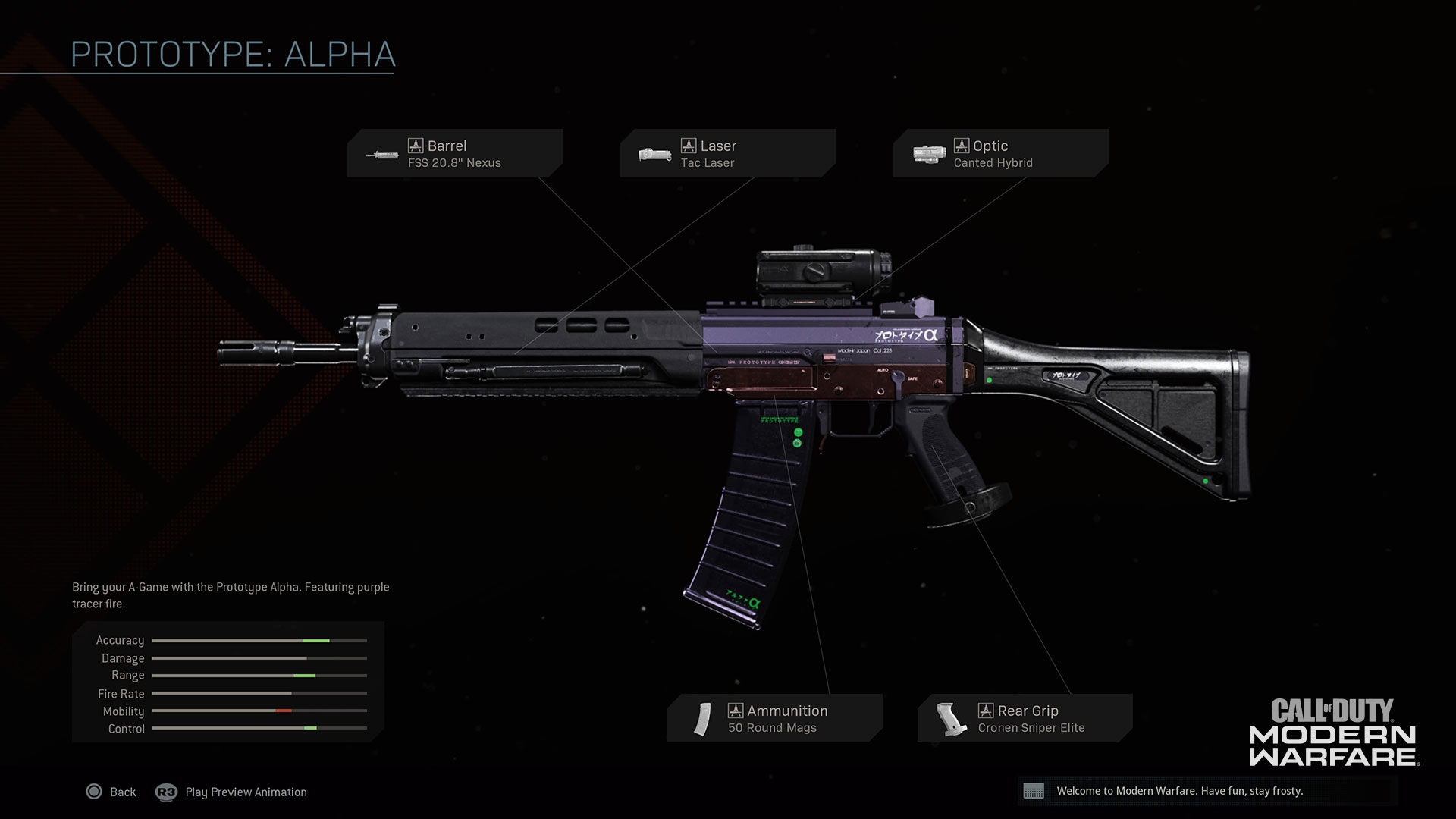 All kills with Legendary weapon blueprints, such as the Prototype Alpha found in the Purple Tracer Pack, counts for this challenge. You can complete this challenge in Multiplayer and Warzone, giving you extra incentive for some Legendary looting.

When time is not on your side, stacking Challenges can help you get to that Season Three complete ribbon sheet faster.

These three challenges, all grouped up within a few ranks, are a great example of that.

How do you stack them? Simple:

Get 15 Longshot Kills, with three also being headshots, and five while at low health, for a grand total of 16,500 XP and three ribbons.

This challenge is easier to complete in Ground War or Warzone, since engagements can go well past the distance needed for longshots. The Variable Zoom Scope on any weapon is your friend here, although you might want to try getting longshots with handguns or SMGs, since their longshot range is shorter.

What may be the most difficult task is getting longshots at low health, but it could be remedied by either damaging yourself, or taking a few limb shots before hitting that longshot.

I still haven’t forgotten my blunder in Tavorsk District in Season One (which you can read all about here), so let’s cut to the chase:

My advice for getting a Juggernaut, a 15 killstreak (14 with Hardline), is to use Kill Chain or Pointman. Using Kill Chain, you want to get a good streak going by choosing either the Precision Airstrike or Cluster Strike as your first streak and picking the VTOL Jet for your second.  Use the kills from both to feed into your 15 Killstreak. As for Pointman, the point value for the Juggernaut is steep, but with enough enemy Killstreak destruction, objective plays, and kills, it can be earned.

Just remember that, once you drop the Juggernaut package, pick it up, lest you let it fall into enemy (or allied) hands and forfeit your win condition for completing this challenge.

To borrow from the CDL professional’s advice kit, becoming a better S&D player is all about “playing your life.”

Remember you only have one life in these modes, so if your team is losing the numbers game during a round, don’t challenge/engage unless you can handle a potential follow-up threat… Or if you can hit your shots.

Also, if the enemy squad has more Operators alive, play the objective (plant/defuse the bomb) and hope it throws off their rhythm.

It seems like these two challenges are the most difficult on paper, but all it takes is a good game of 10v10 Domination or Ground War to complete this.

Push aggressively near a captured enemy flag – preferably with a weapon with extended mags, vehicle or Killstreak – and lay down as much firepower as possible. Usually in 10v10 and Ground War lobbies, you can find three or more enemies on a flag.

Within those seven Triple Kills, you’ll be able to find one more straggler lying around to net those two Fury Kills. And don’t worry about getting four kills lined up in the killfeed – that’s a Quad Feed – as you only need four kills in rapid succession for a Fury Kill.

Since I’ve been using Specialist with Hardline lately, I can easily track my Bloodthirsty medals and get rewarded as I earn kills. Specialist gives you a fourth, fifth, and sixth perk at two, four, and six kills in a single life (one, three, and five with Hardline).

If I wind up hitting the Specialist Bonus, all the better; then I can go for a Tactical Nuke, earnable at 30 kills, not 25 (like in previous Call of Duty titles).

Speaking of that, let’s talk about the weapon that helped me chase that high-end secret killstreak: the Gunsmith Custom Creation of the Week. 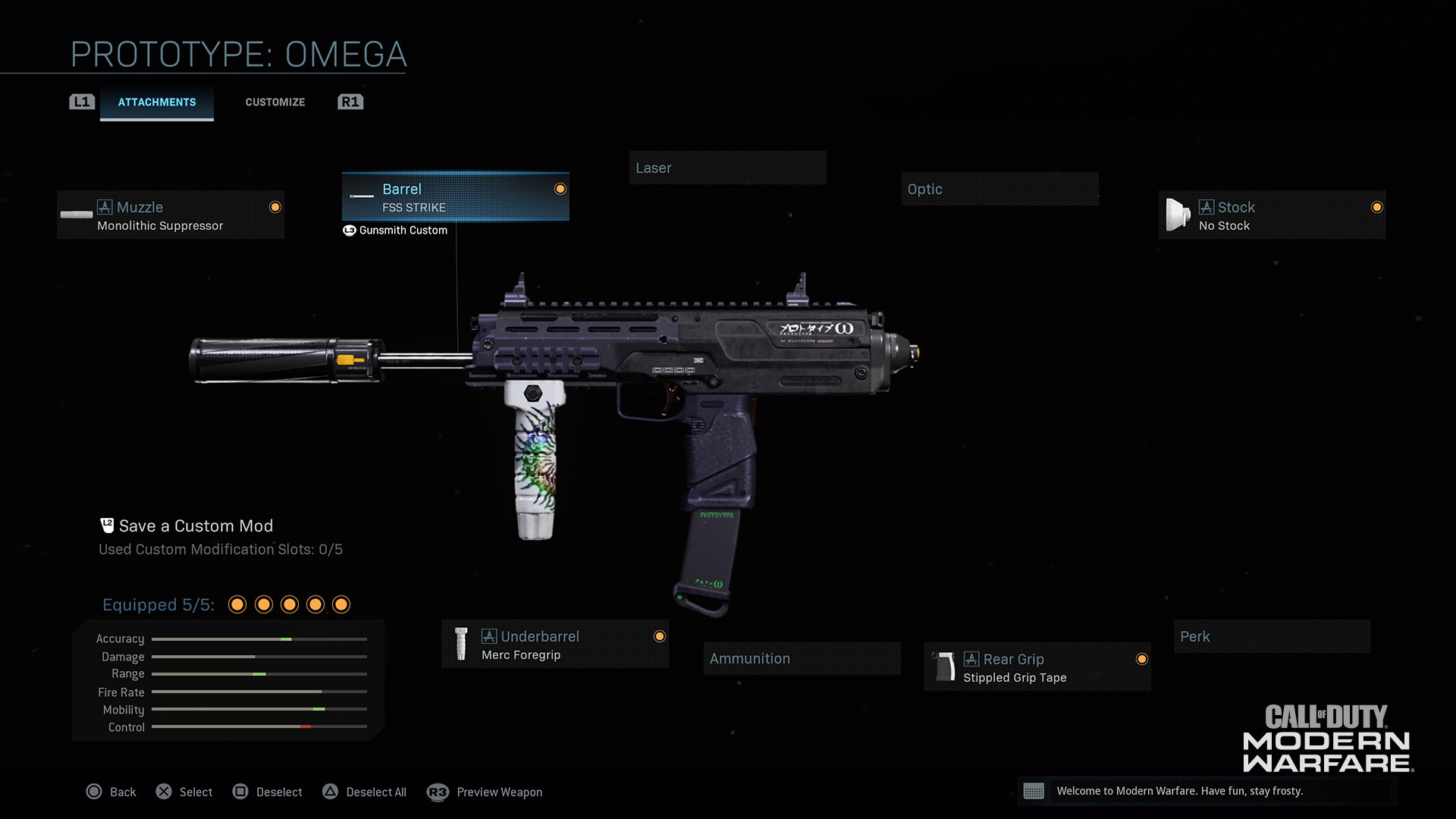 This is the weapon that helped me chase greatness, and while I’ve yet to earn it, it’s gotten me close.

Based on the Prototype Omega Blueprint in the Tracer Pack Purple bundle, this weapon shoots purple tracer bullets – remember that tracer rounds are carried over to a Gunsmith Custom creation only if it’s the base weapon.

With this configuration, this SMG’s effective range is close to maxed, yet doesn’t sacrifice any movement speed – in fact, it’s faster than the stock weapon. Although it takes some practice to get used to a slower aim down sight speed and decreased aiming stability, this weapon has found a permanent place in my loadouts when I’m not on my road to Damascus camo.

What goes into creating a weapon that can do all of this? Start by only keeping the weapon’s Stippled Grip Tape for better sprint to fire and ADS speed, then add the FSS Strike Barrel, which will give you a big damage range boost. No blueprint has this attachment yet, but it’s the first barrel attachment to unlock on this weapon’s progression path, making it an easy pick-up.

Next, grab the Bug Spray blueprint (found in the Insecticide bundle released during Season Two), and borrow the Merc Foregrip from it to get better recoil control and hip fire accuracy.

Finally, you’re going to want to take the Mud Dauber’s Monolithic Suppressor to boost that damage range even further, and its No Stock to maximize movement speed and mitigate ADS speed penalties.