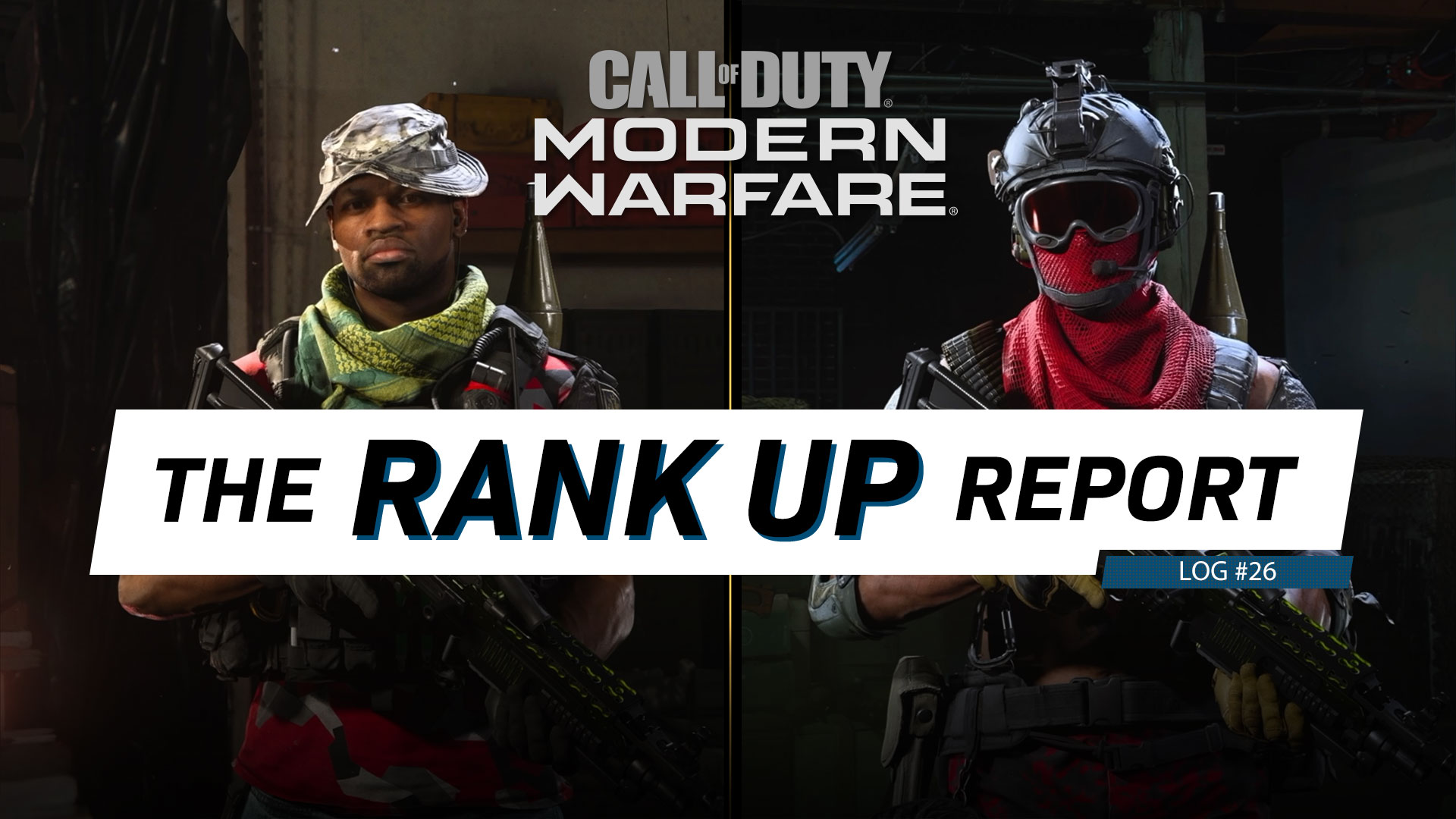 A new Rank Up Report format comes just as Season Three gets its own serious upgrade. Check out what the AGB has been up to, including what’s happening with the Bruen Mk9 and getting all LMGs the shiny Platinum camo.

A new Rank Up Report format comes just as Season Three gets its own serious upgrade. Check out what the AGB has been up to, including what’s happening with the Bruen Mk9 and getting all LMGs the shiny Platinum camo.

Welcome to the Season Three Reloaded edition of the Rank Up Report.

Just like Season Three, this personal Rank Up Report is getting an overhaul to showcase more badass weapons – thanks to the new Gunsmith Customs feature – and Activision Games Blog articles you may have missed during the week.

This week, I’m showing off Firebreak Kreuger for the Allegiance, and Mighty Arsenal Thorne from the Coalition.

You can find Thorne’s skin within the Battle Pass and unlock it by completing his Operator Challenge, which is a four objective set that mixes together Multiplayer and Warzone-based missions.

As for Kreuger, his Firebreak skin is found in the new Pyromaniac Bundle that came out this week. Also included in this bundle is the Caldera, a Shotgun Echo blueprint that comes with Dragon’s Breath Rounds, and the new ‘Heat Treat’ flaming Throwing Knife. 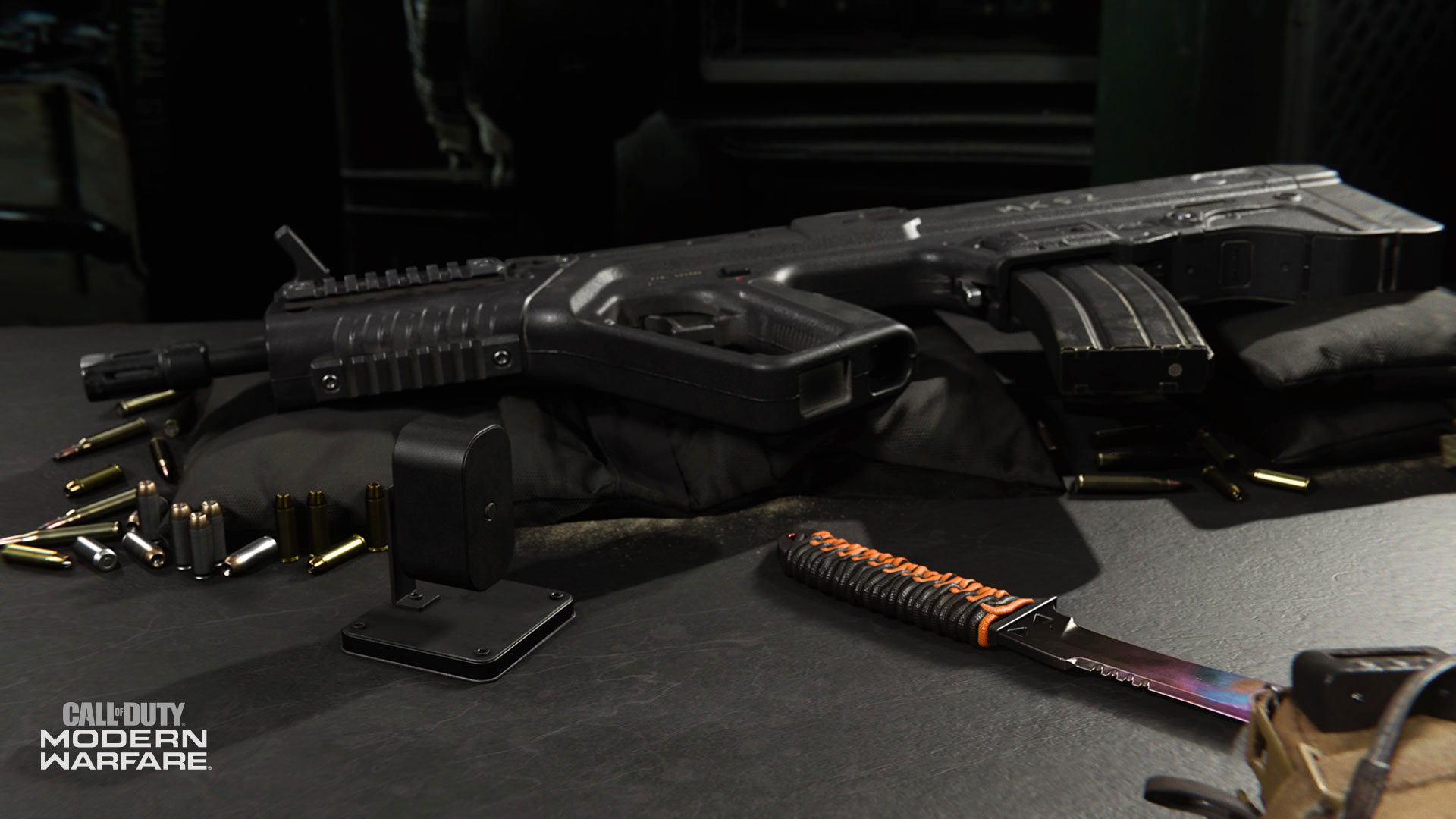 Yes, lethal equipment is getting the taste of blueprint variants, and I couldn’t be more thrilled. Thanks to this new knife, not only can I attempt to land an epic cross-map Throwing Knife, but I can also let that enemy feel the burn of that death with some flaming effects.

And by the way: as long as you have a Throwing Knife – flaming or otherwise – as a lethal equipment piece, your melee attacks are one hit kills in Multiplayer or knockdowns in Warzone. 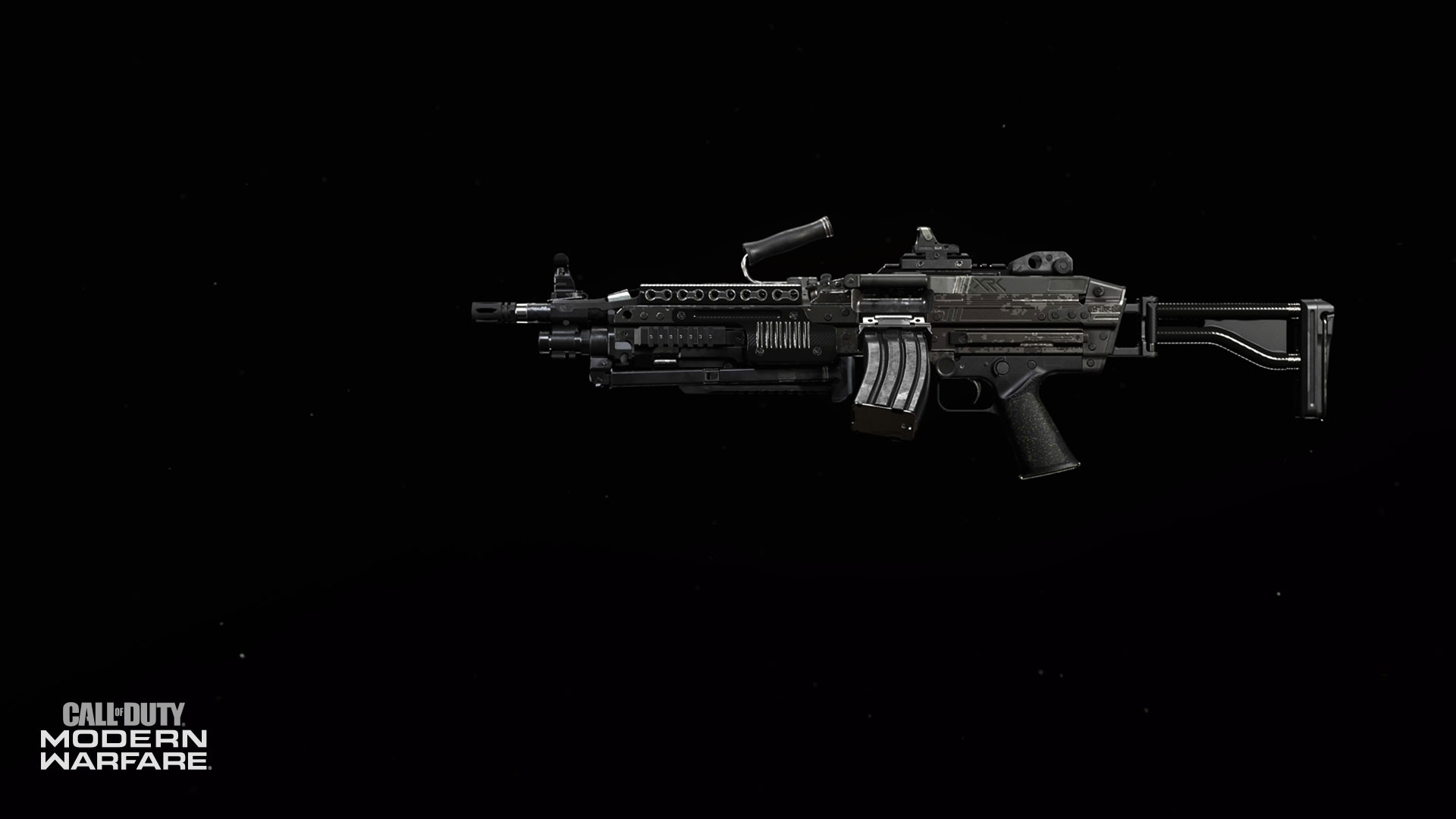 So, what weapon are those Operators holding? None other than the Bruen Mk9, which is decked out in shiny Platinum camo above.

The Bruen Mk9 is an open-bolt LMG that packs a serious punch, and is yours to unlock either through a simple challenge, or the new Encryption bundle. You can read all about unlocking this LMG here.

To earn Platinum camo on all of your LMGs, here are the requirements in order to earn Gold on every LMG, which unlocks Platinum. For tips to get Platinum camos for your SMGS, read this Rank Up Report. 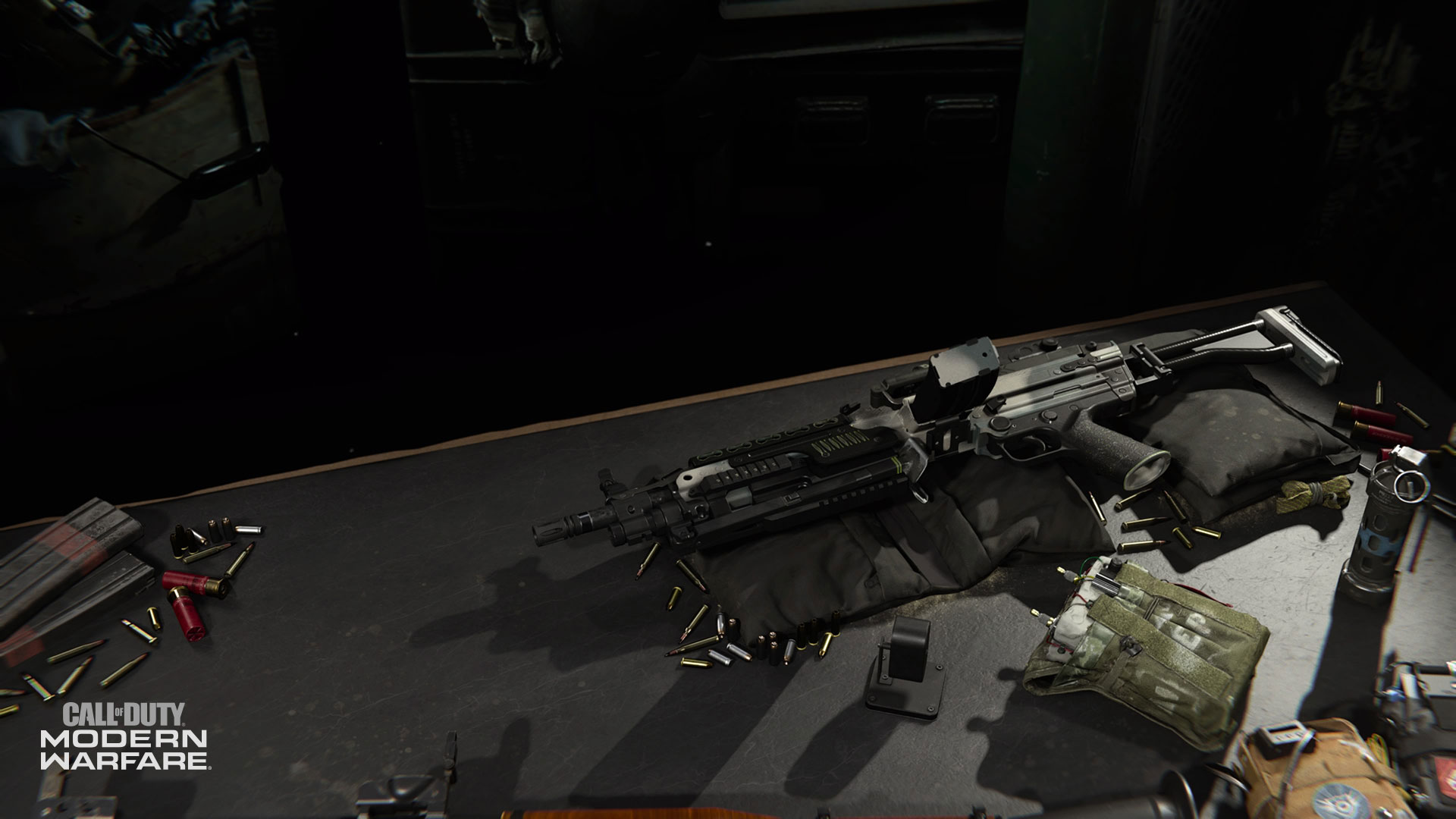 A super simple objective that you’ll complete as you do other camo challenges.

Yes, you have to earn 25 more kills to earn all Spray Paint camos compared to the 500 for SMGs… It just goes to show that LMGs are literally the bigger brothers to SMGs. 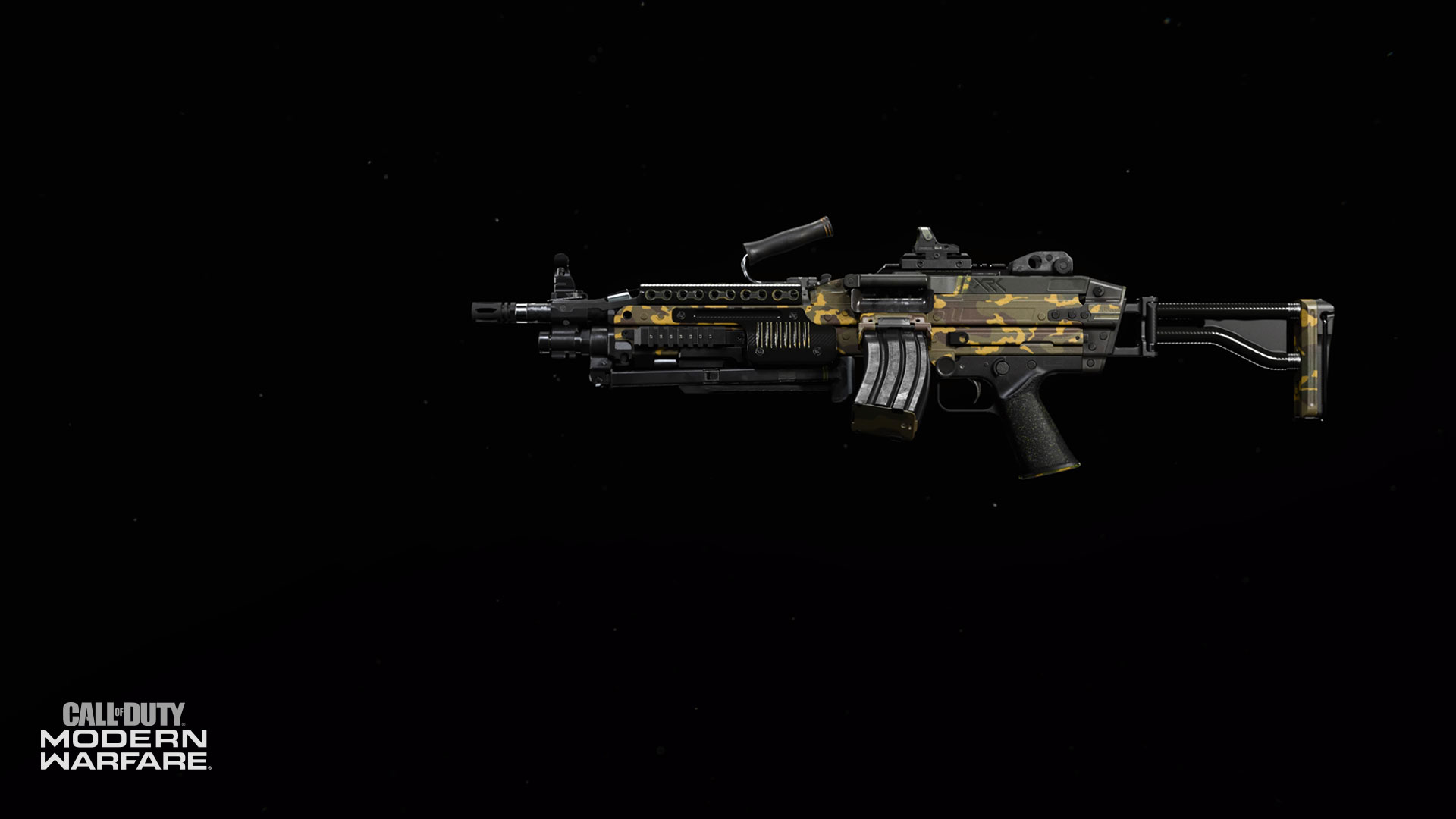 Only needing to earn 75 headshots isn’t so bad, especially with how accurate LMGs can be and their headshot damage multipliers.

Digital – Get kills while Crouching (65) 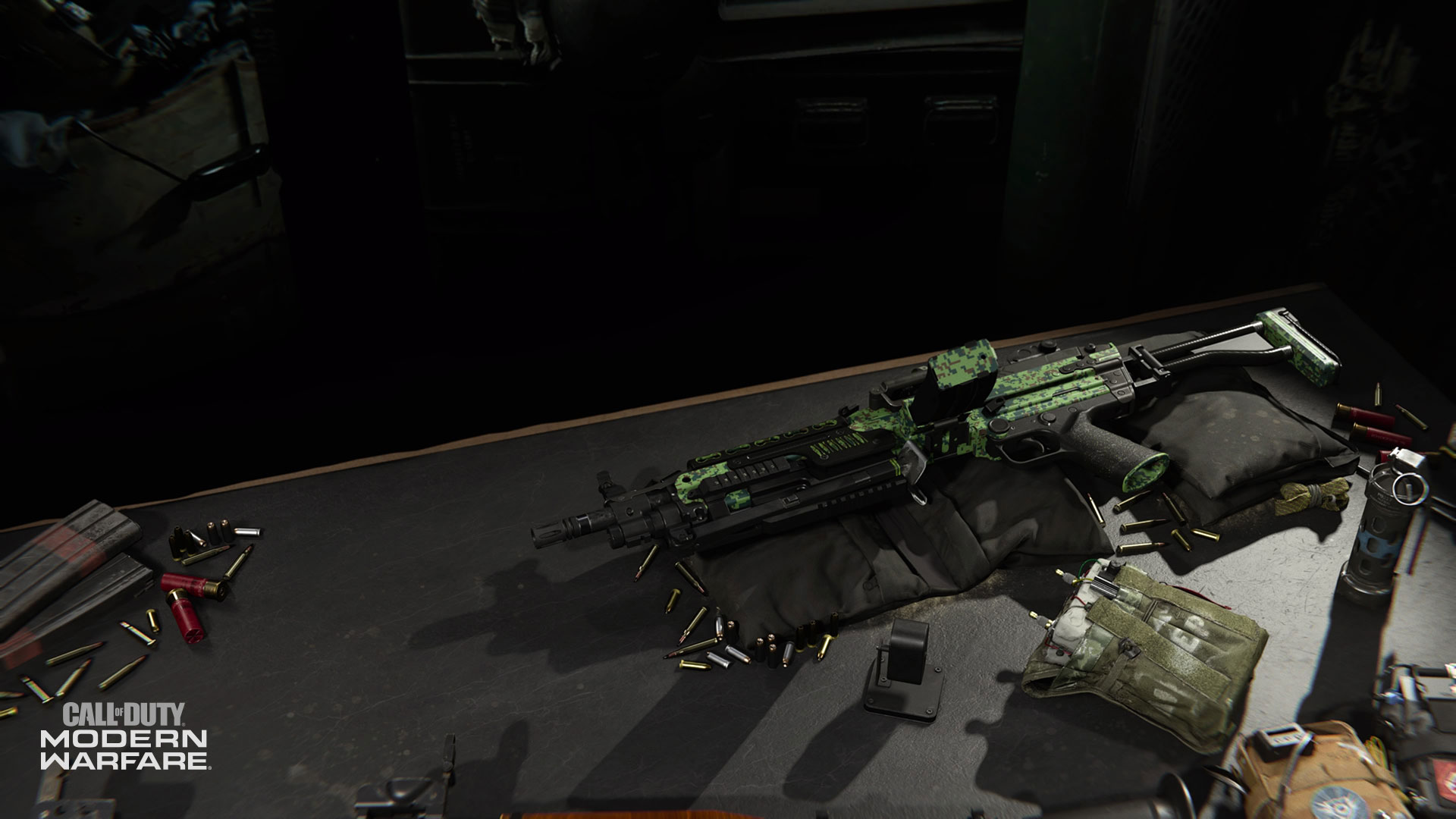 You may naturally crouch with an LMG to reduce recoil, since these beasts can, and will, kick if you fire from a standing position. 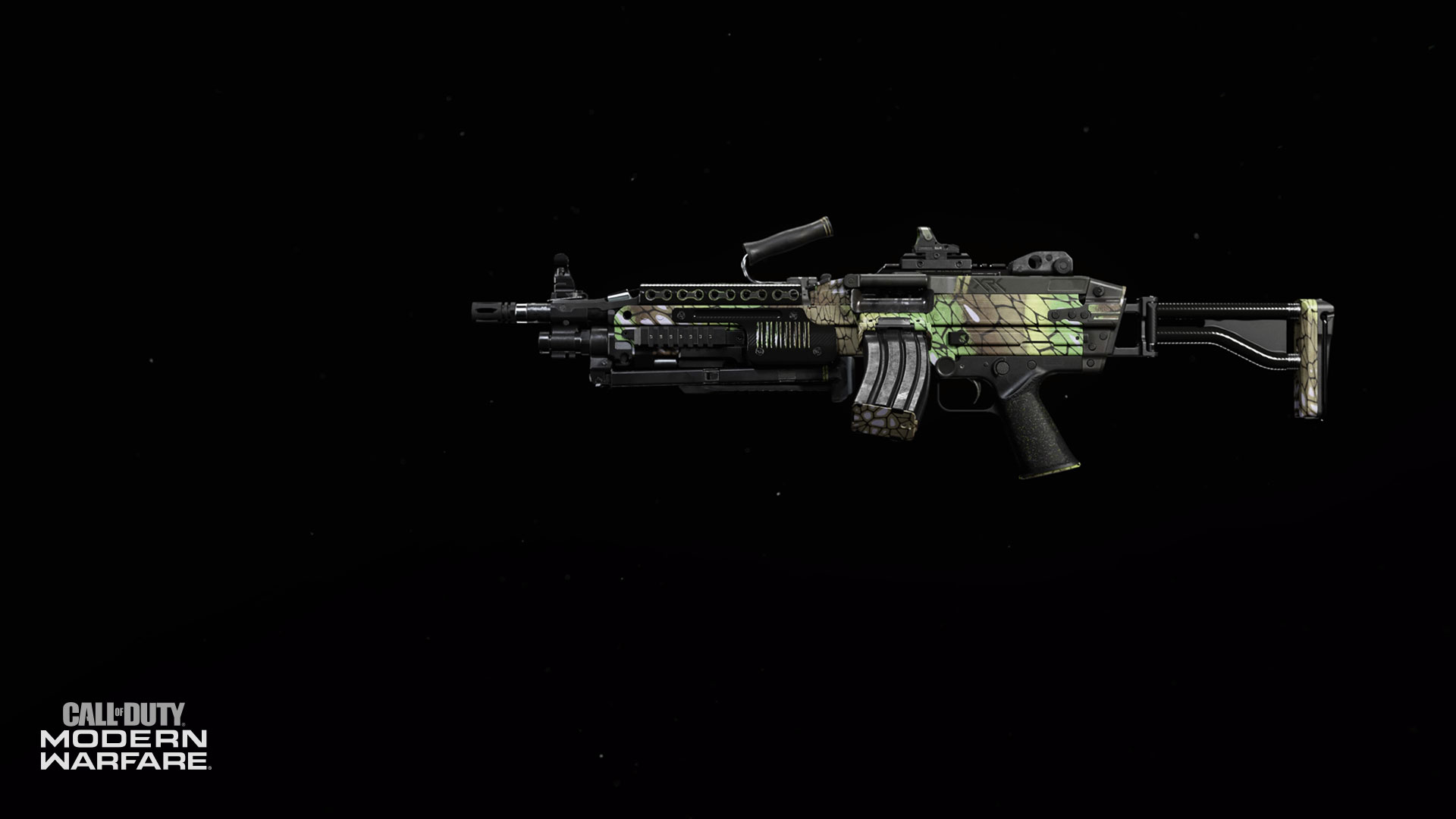 The expression “spray and pray” is basically built for LMGs, which come with a high hipfire spread even if you throw on a Merc Foregrip and 5mW Laser.

Along with equipping those two attachments, try to be as close to the enemy as possible when going for hipfire kills, lest you spray all over the place down range. 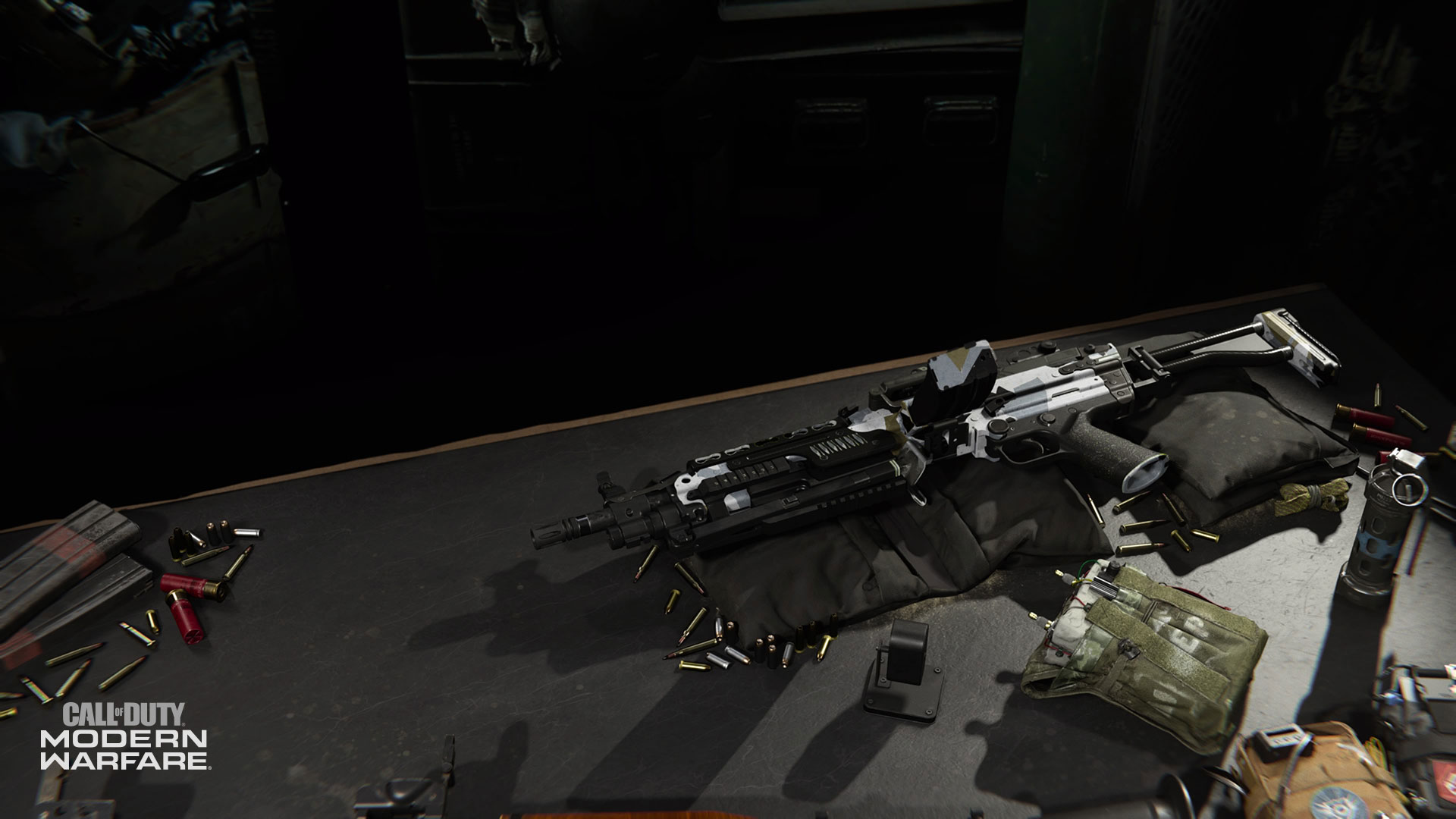 This might be unlocked naturally as you chase this camo in Ground War or out in Warzone, but due to an LMG’s naturally high kick, I like to pair this challenge chase with the next camo challenge. 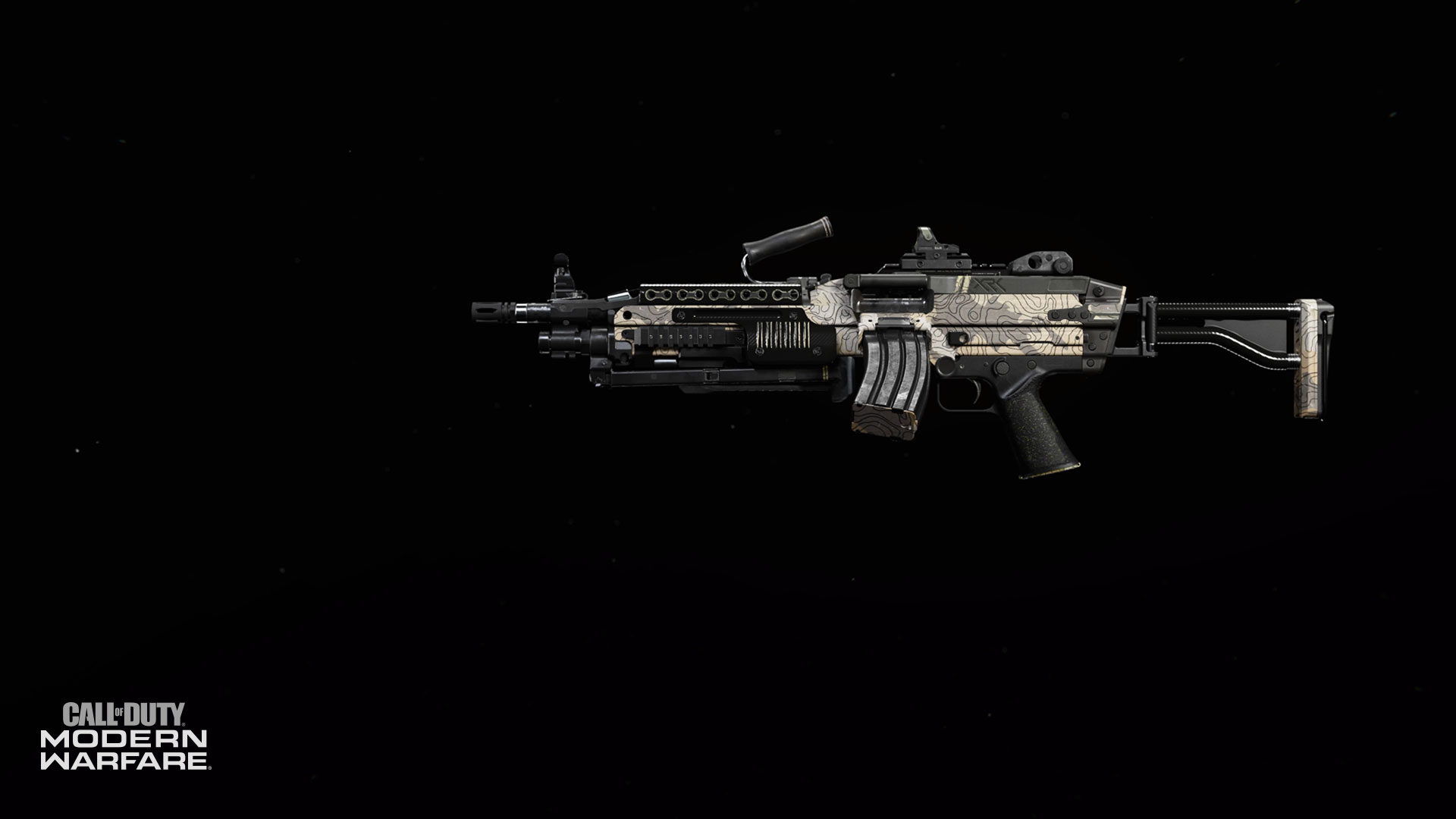 I cannot recommend mounting an LMG – no matter what it is – enough, as it significantly counteracts the weapon class’ high recoil.

As you noticed, you only need 45 Mounted kills AND 45 Longshots. How can you do this easily? Go ahead and find a ledge or wall in a Ground War map with a long sightline – or bring your own mounting point with a Deployable Cover – and kit an LMG for maximum aiming stability with a sniper scope or other high-powered optic.

Then, go for longshots; aim at targets that are around a couple dozen meters away, and move if that “longshot” alert isn’t popping up after kills. 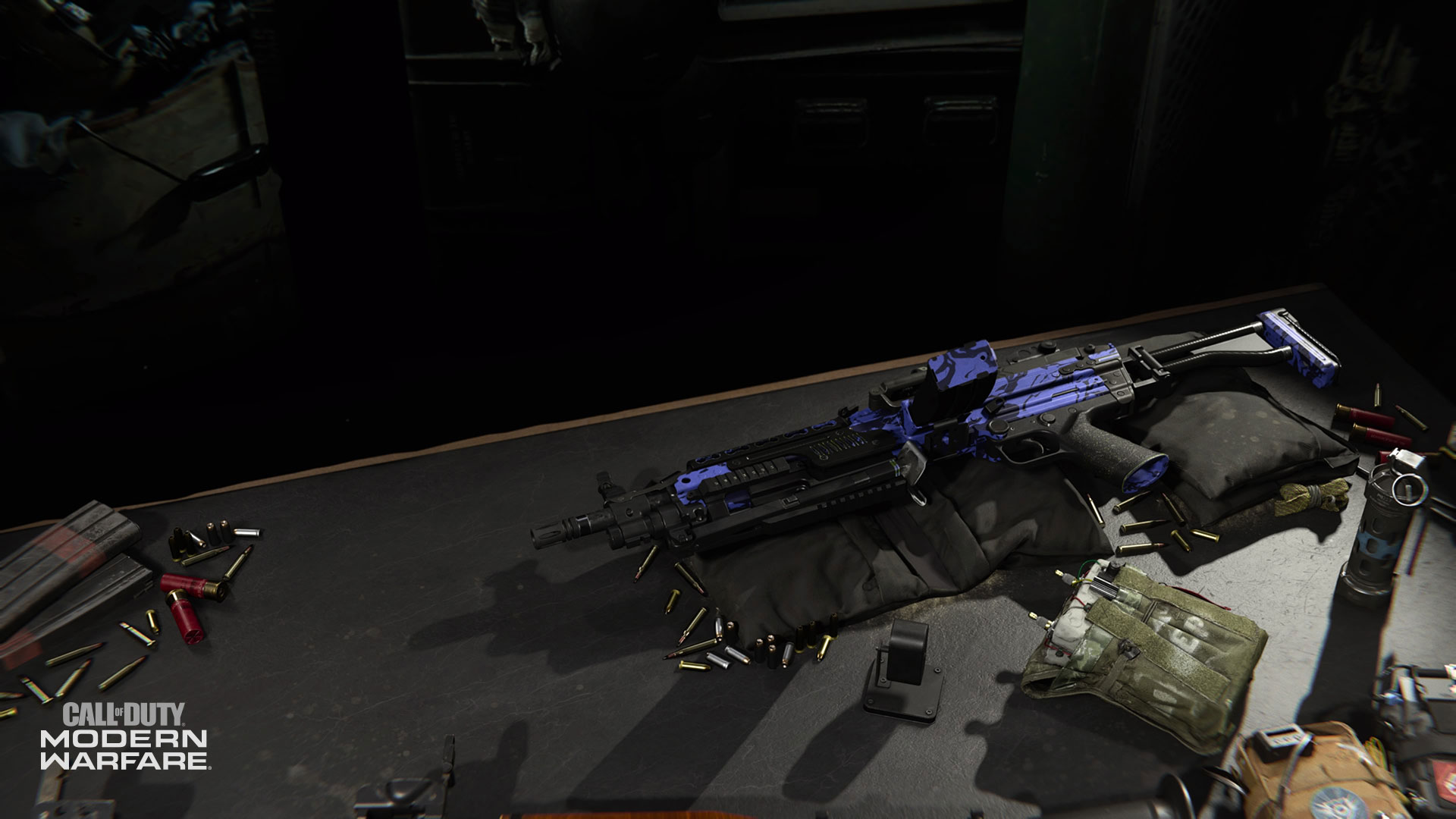 Want to experiment with your LMGs? Do this challenge when testing out Legendary blueprint versions of them. They come pre-built with five attachments, and that combo might just become your new favorite as you complete this challenge. 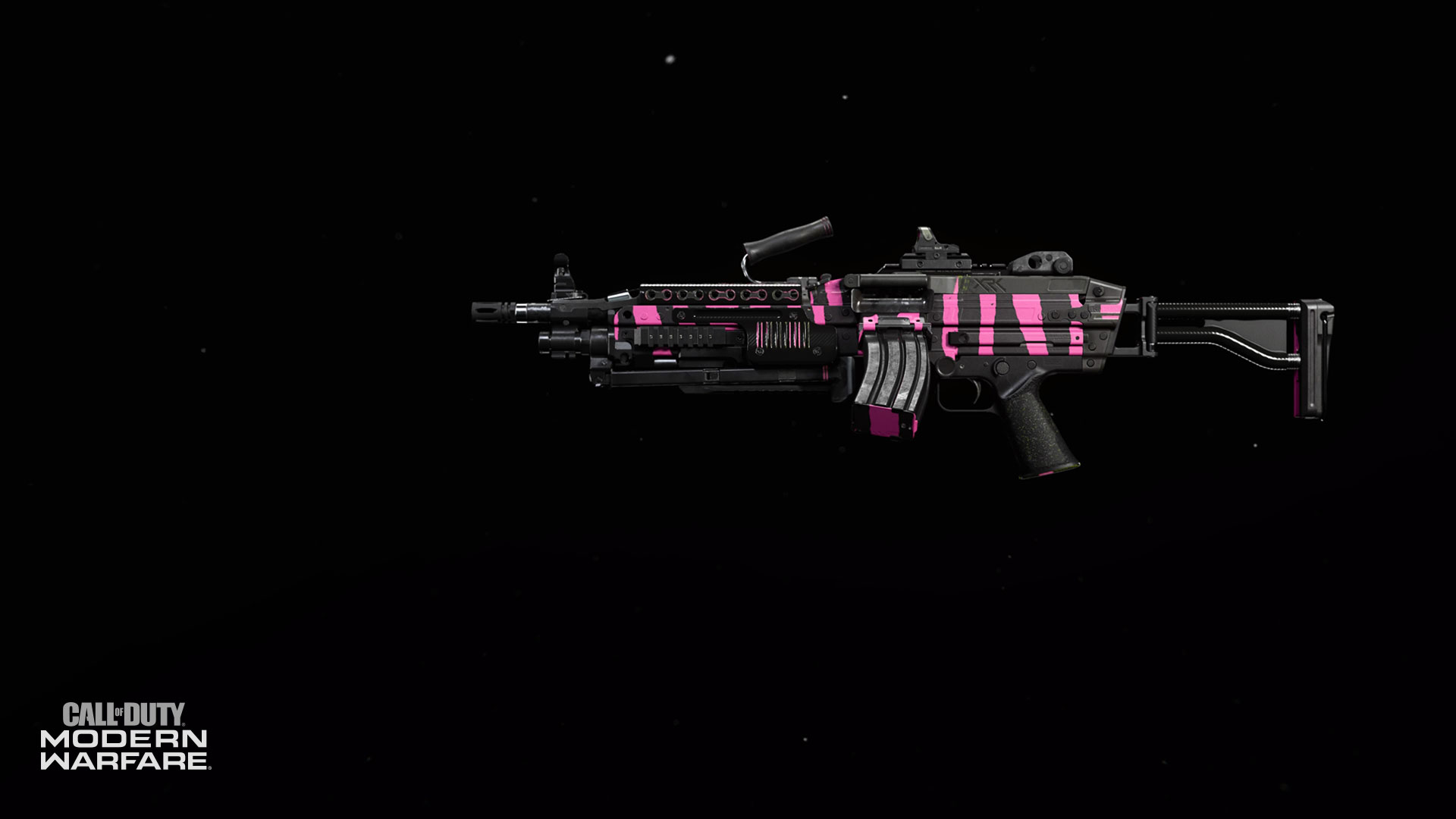 Thankfully, Infinity Ward made this a reload challenge, since LMGs are notorious for long reload cycles.

If you have trouble getting Double Kills, LMGs have magazine-increasing attachments, with some going up to 200 rounds of ammo per mag! 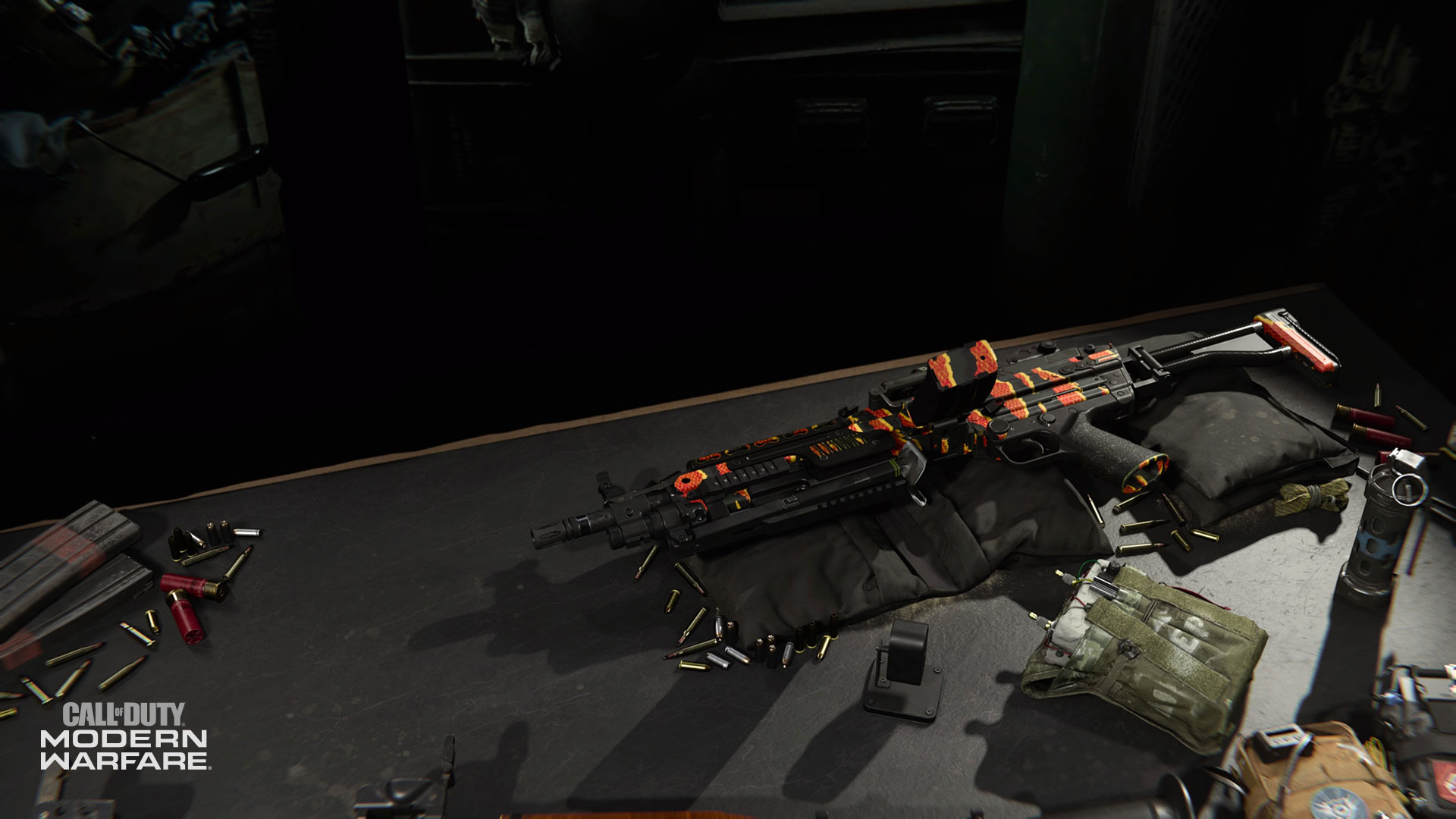 In Season Three another Zero Tolerance Officer Challenge, unlocked at Rank 61, requires you to get 300 kills using a Weapon with 0 attachments for a 15,000 XP reward.

So, do the math: the four original LMGs (Light Machine Guns Alpha through Delta) multiplied by 75 kills per LMG equals… 300 kills with 0 attachments.

That, my friends, is called maximum efficiency. 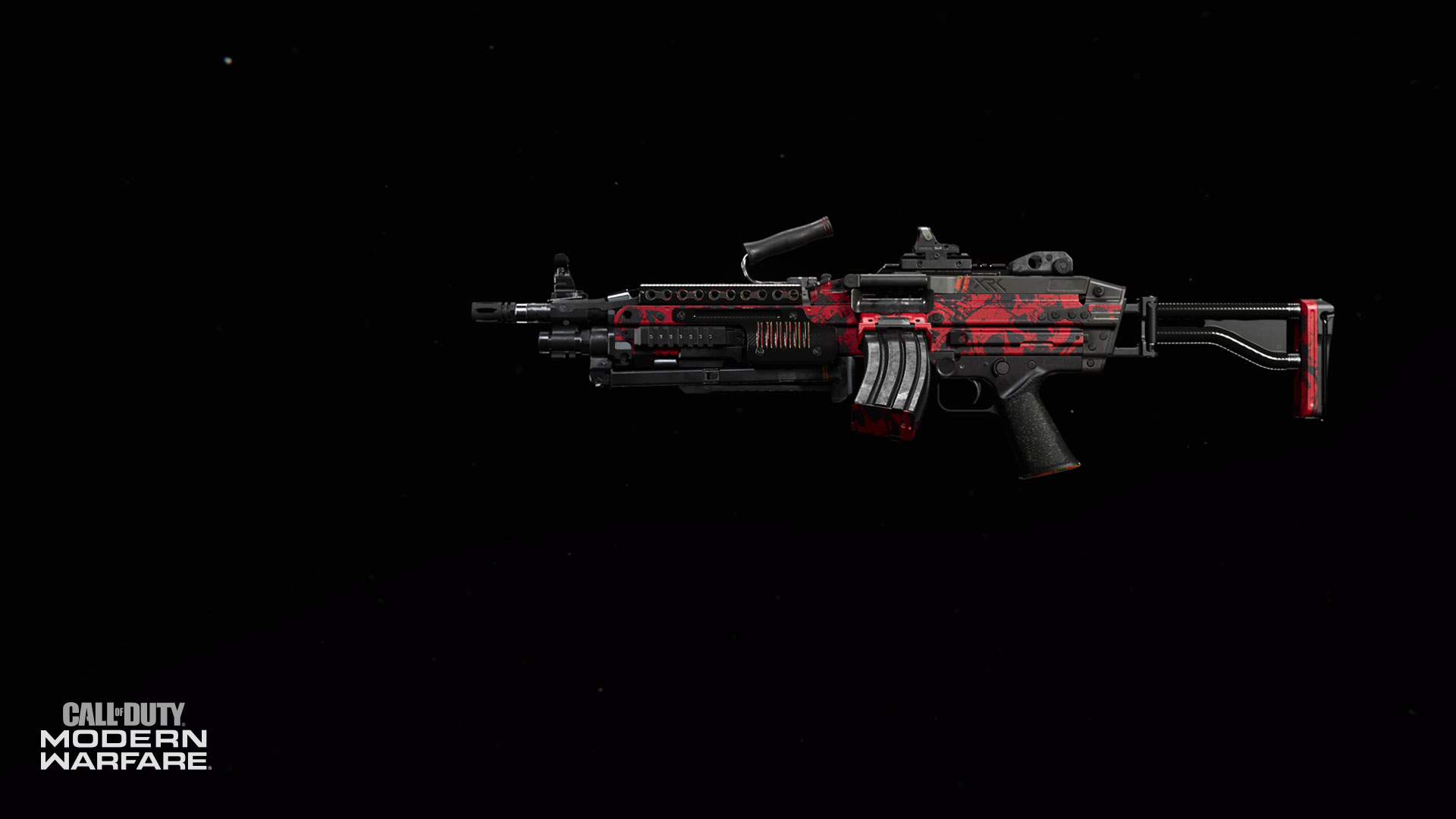 Getting a three killstreak with an LMG doesn’t have to be hard.

Once you complete all the weapon challenges for an LMG, you unlock the Gold camo. And, once you unlock that for all four original LMGs, you unlock Platinum for all of them.

Completing the Holger-26 and Bruen Mk9 camo challenges unlocks Gold for them and, if you had already unlocked Platinum for the other four LMGs, that shiny Platinum Camo is now yours for the Holger and Bruen.

Although I don’t like to pick favorites, you should seriously check out the Obsidian Camo article if you’re itching for more camo-related challenge tips or a few other articles that appeared on the Games Blog this week:

Last, but certainly not least, I’ve decided to showcase an awesome Gunsmith Creation and sharing the part list for you to recreate. These weapons not only look badass, but are great ways to configure a weapon… Or at least, in my personal opinion and playstyle. Needless to say, results may vary, but these creations are cool and nobody can tell me otherwise.

Anyways, we’re showing off the Chupacabra LMG, a Season 3 Battle Pass reward that is rather accurate with a great suppressor to boot. (Look forward to a bigger breakdown of this gun next week!) 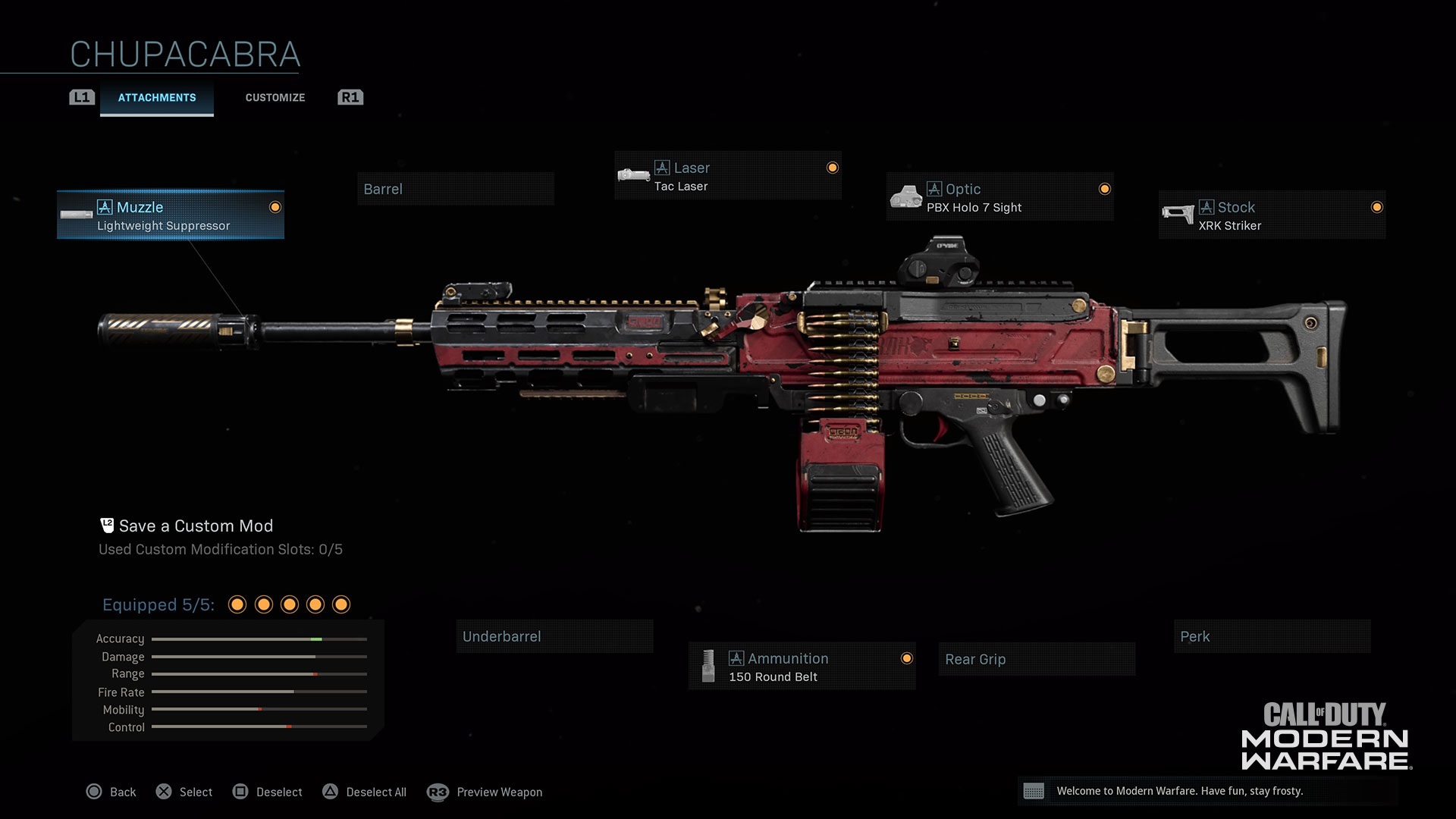 Now, how can we make this look more badass? Why not put a little bit more black to go with the Chupacabra’s red finish? 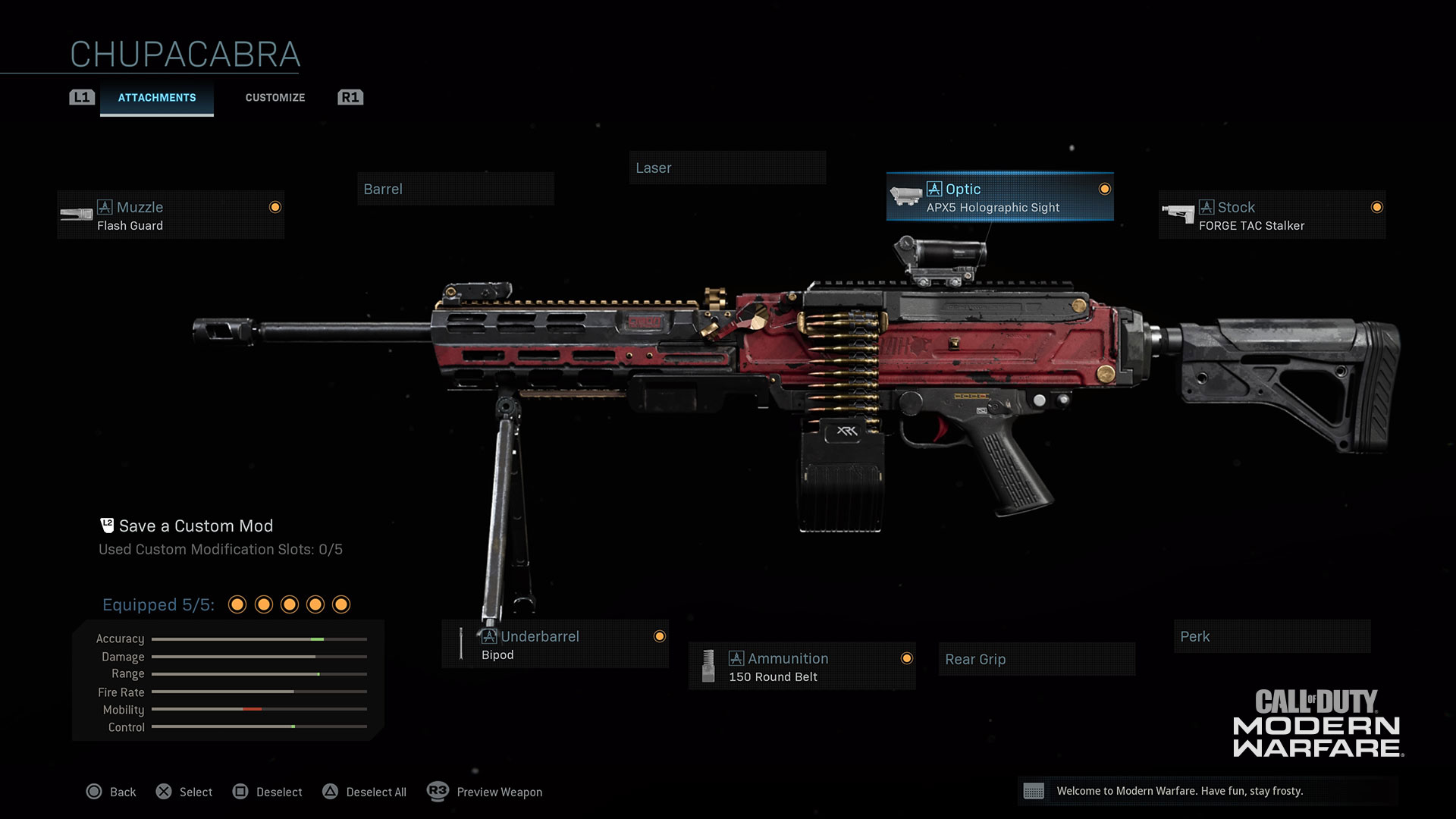 Here, we took the optic from the Warhead blueprint, the reward for those who reached Max Rank in Season One. We also mixed in the Flash Guard and 150 Belt from another LMG blueprint straight from the Season Three Battle Pass: the Mighty Moe. Finishing off our creation is the FORGE TAC Stalker Stock and the Bipod from the Old Wounds blueprint, which is earned by completing the Expert Gunsmith Mission.

This alternate way to build the Chupacabra trades off a little speed, but makes it a more accurate weapon, allowing an optimal sight picture thanks to the Flash Guard and alternate Holographic Sight. I’ll also get better stability from the Stock, and more recoil control while crouched and prone due to the Bipod. In general, this weapon is great for laying down accurate fire, no matter the distance.