The X-EON and the VPR: How to Unlock the Latest, Free Infinite Warfare Weapons

A late-March surprise from Infinity Ward features two free unlockable weapons in Call of Duty: Infinite Warfare. Here’s how you can unlock them, as well as a few tips on how to put them to use.

If you are anxiously waiting for the next DLC pack for Infinite Warfare to drop like I am, then here’s something to help tide you over.

If you have the Season Pass for Infinite Warfare, the base versions of these guns are already unlocked for you. But for those who don’t have the pass, you just have to complete two in-game challenges to get these new weapons. With that said, here’s a handy guide to those challenges so you can unlock Infinite Warfare’s two newest guns, as well as some tips to all soldiers online who want to get the most out of the latest weaponry.

How to Unlock It:

Can you get a kill with six different weapons in a single match? Great! Now do that 15 times, and the X-EON is yours.

This may sound like a daunting task at first, but if you plan out your Loadouts, it is easier than it sounds. Put a variety of your favorite weapons into all of your loadout spots, and use Overkill if need be so that you can carry two primary weapons. Whenever you get a kill with a gun, make sure to switch your class upon death, and when in doubt, pick up any weapons off the ground and try to get kills with them.

If you think that you have the skills to use any random gun in the game though, you could try your luck in Gun Game and knock out this challenge within half an hour. 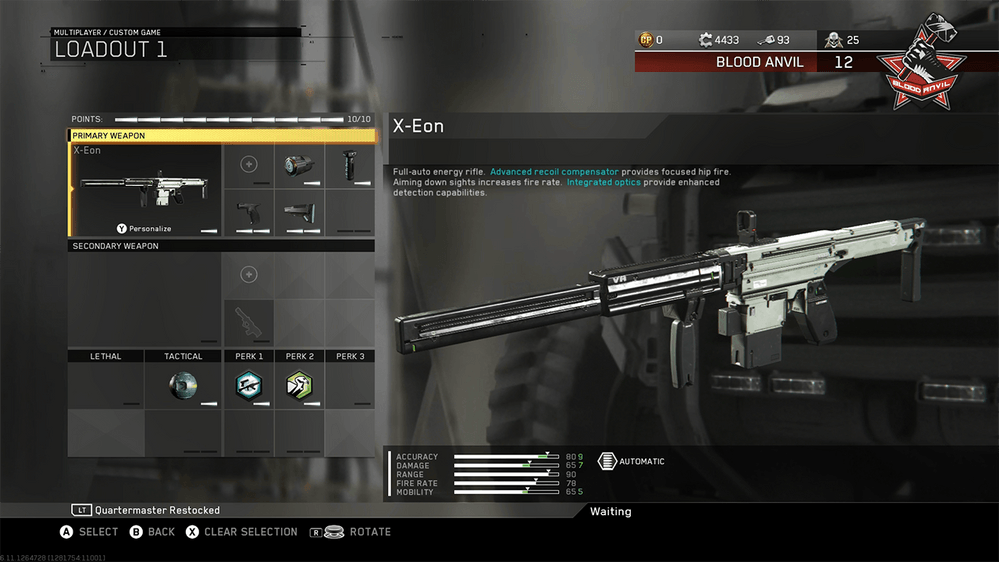 First, the “integrated optics” looks cool, especially when it pops up from inside the gun, and it essentially acts as a Trojan sight on steroids. If you get used to it, you’ll have an optic that outlines enemies who don’t have the Cold Blooded or Hardwired perks equipped, or are using Active Camo.

This is especially handy if you have some Smoke Grenades, as they will ruin the enemy’s clear shot at you while you can still see them with your integrated optics. If you are going to be constantly aiming down sights, Foregrip, Quickdraw, and Stock are all essentials, with those attachments decreasing recoil, allowing for faster aiming, and faster movement while aiming down sights respectively. With increased accuracy from a clear outline and strong attachments, also consider equipping the Faraday Slug attachment for increased headshot damage.

The slower rate of fire when not aimed down sights, coupled with the gun’s tight hip spread, can be further improved with a laser sight if you decide to mostly hip fire with the X-Eon. In that case, using Gung-Ho to allow firing while sprinting and sliding gives you time to get a few shots in before crouching down and concentrating on an enemy.

As for perks, you can easily slap on any of your favorites, although Scavenger is great for those who really are getting high killstreaks with this gun and don’t want to run out of bullets. Bring in Dexterity to have faster reloads and weapon switching, especially if you are going to use an automatic pistol secondary like the Oni or Hornet to compensate for the X-EON’s slow hip fire rate. Finally, my personal favorite rig with this gun is the Phantom with the Pulsar Payload and Heightened Senses Trait, which will help you with your general awareness of enemies around the map.

How to Unlock It:

First, you need to have unlocked the X-EON before you attempt this challenge, or get extremely lucky by killing enemies that have the gun, and using it against them. Because in order to unlock the VPR, you need to win twelve games where you got at least 1 kill with the X-EON Assault Rifle.

Why a dozen? Because all good things come in dozens. Eggs, donuts, dual-barreled submachine guns.

This challenge is a lot easier with friends, so grab your pals and go play your favorite game mode together. You’ll unlock it in no time if you are able get a full party of people together to help grind this challenge, and having a few friends that just focus on winning the game could ease the pressure off of trying to use a new gun AND win a game.

Obviously, if you are having some trouble using the gun, just get the one kill required for the challenge, and then switch to your favorite loadout to get the W. 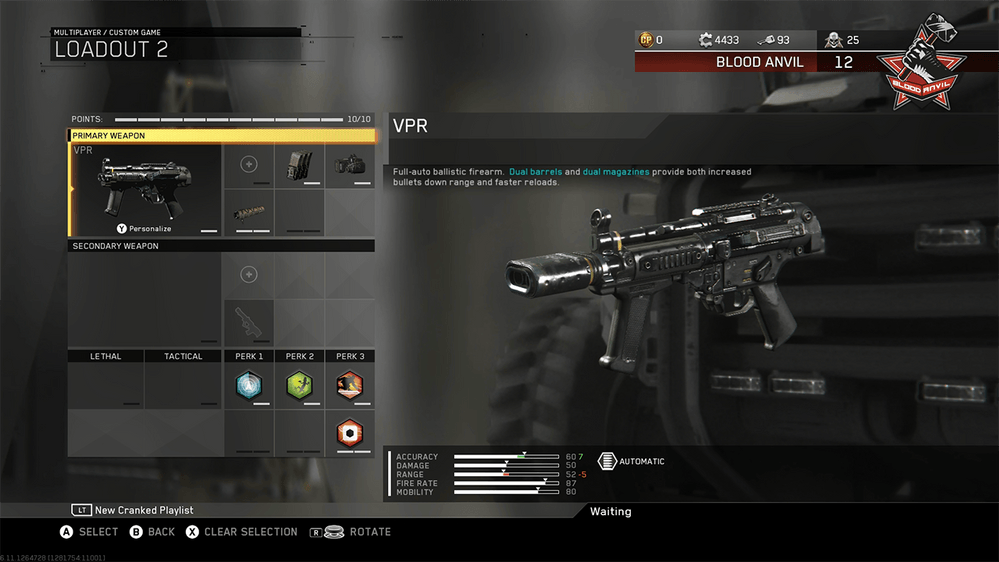 If you like bullets, you’ll love this gun, as the dual-barrel firing mechanism allows for two shots in one. The hip fire crosshair on screen is a bit weird, but it accurately displays where both of your bullets will end up. Keep in mind that if you aim down sights, both barrels will move closer to one another as compared to firing from the hip.

However, hip firing is one of my favorite ways to use this gun, and the 60-round magazine capacity with Extended Mags yields a mountain of bullets. Slap on the Laser Sight and Gung Ho, and you’ll have a grand old time throwing bullets downrange with reckless abandon. Alternatively, this gun is a great weapon to sneak around with, so you may want to add a Supressor and a combination of stealth perks (Blind Eye, Ghost, Cold Blooded, Hardwired, Dead Silence) to get the jump on your enemies.

While the VPR can hold its own at longer ranges, consider taking another unlockable weapon, the UDM, as your secondary. The slow fire rate in exchange for more damage at longer ranges pairs well with the fast firing VPR. On top of its base features, adding Hollow Point as well as Quickdraw to this gun will make it a deadly “secondary” weapon you can use whenever you aren’t in close quarters.

Because I love being a speed demon, I recommend the Warfighter Rig for this gun with the Overdrive Payload and Ping Trait. That way, you can rush around the map while spraying with the VPR, and every kill will give you a clue to where more enemies might be hiding.

No matter how you unlock or use these weapons, the one last tip I can give you is to have fun, as they bring a new element to the already exciting multiplayer in this game.