We spoke with some of the game developers behind Winter Crash, so between games filled with exploding gifts and Santa airstrikes, check out this post for some insight into this holiday hotspot!

One of the Call of Duty® highlights over the holidays has been the Winter Crash map, which puts a festive, gift-wrapped filter over the Crash map in Call of Duty®: Modern Warfare® Remastered. We spoke to some developers at Infinity Ward and Raven Software to talk about this winter wonderland and what it was like creating both the original and the new version. 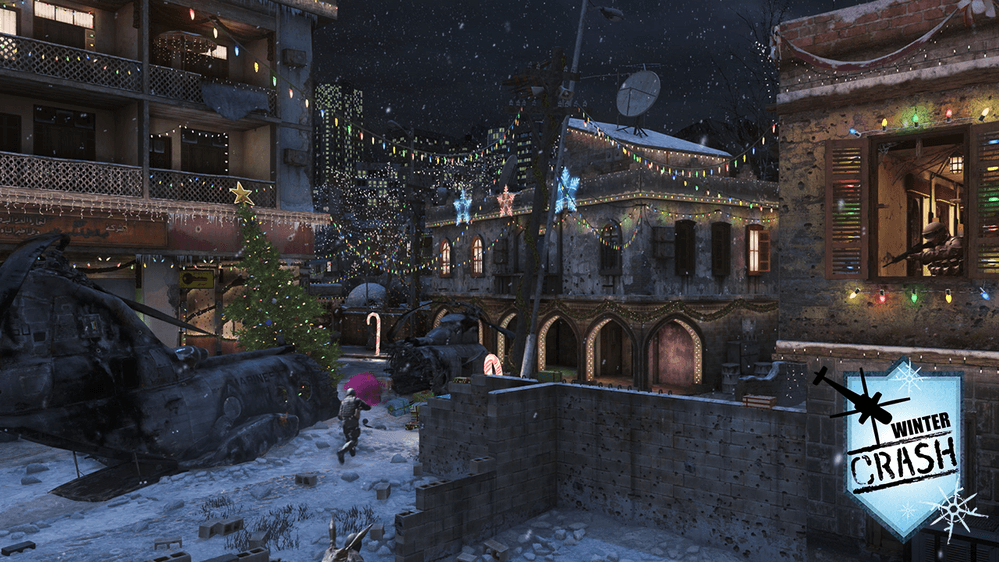 First up is Stephen Miller who works as lead audio director at Infinity Ward. Stephen has worked on every Infinity Ward Call of Duty title since Modern Warfare® where he was a sound designer. He worked on the original Winter Crash, and here’s what he had to share:

Activision Games Blog: The original Winter Crash map is now a classic, what can you recall about working on the design?

What I remember most is how thrilled we all were that the game was doing well, and that we were able to have a little fun redoing one of our favorite maps. It certainly helped get us all in the holiday spirit.

When did the team decide to make a Winter Crash version?

The decision came in late as I recall, so we jumped in to work quickly. By the time the artwork and visual effects were almost final we only had a week to do the sound for the map.

When “winterizing” a map, how does the team approach that beyond just dumping snow on ground?

The Christmas lights everywhere certainly made it feel winterized to me, but as far as sound goes the biggest changes I made was to the main ambient and 3D ambient emitters. The original map was meant to feel desert-like and war torn, so I changed all of that out to make it sound colder and more peaceful to match the new updated art.  That is until the match starts and the soundscape is filled with gunfire and explosions in true Call of Duty fashion.

What were some of your favorite parts from the original map?

My favorite part of playing the original map was always holding down the area around the crash site. That is until someone would lob a grenade into the helicopter and catch me off guard.

Sound is a big part of map design. What went into making audio stand out in the original Winter Crash?

Making the map sound cold instead of the dry desert feel of the original was the biggest change. Removing the sandy wind gusts and replacing them with whispy winds on wires and on the corners of the buildings. The most fun part of the sound design though was swapping out the airstrike for our Santa's sleigh, with the jingling of bells and the voiceover clips. There were some great alternate takes that never shipped with the map, due to some rather off-color language.  During playtests of the map with the other takes, people would laugh so hard when the Santa airstrike came in that they would forget to play. 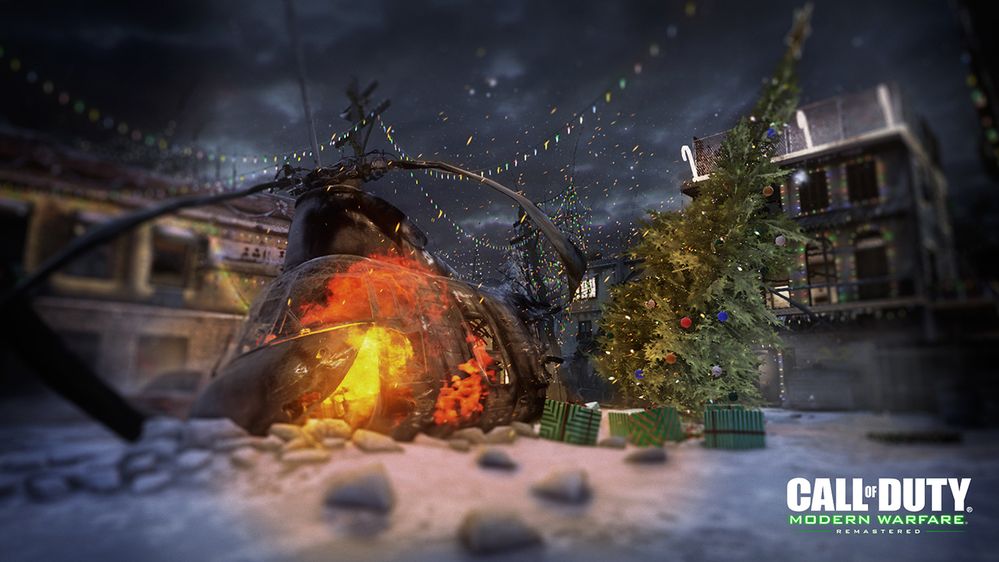 When did the team decide to remake Winter Crash?

Renner: As fans we wanted Winter Crash right away in the development cycle.  It started as “wouldn’t it be cool if…” until one day it was in the depot and we were working on it.

Button: It was definitely a hope of ours from the very beginning, but it didn't always appear like we'd be able to fit it into the schedule with the original maps (rightfully) taking priority. Thankfully we were able to get support from a few other teams after the initial launch and free up a few weeks for ourselves to make it a reality

What were some of your favorite things from Infinity Ward’s original Crash design?

Renner: Hands down my favorite was the Santa airstrike. We were all fooled into thinking it was actually Santa flying over in the original. I couldn’t believe that it was only audio of Santa flying overhead.

Button: The Santa's sleigh replacement for the airstrike killstreak is my favorite, but I'm also a huge fan of the lighting in the original, I think they really captured the feeling of the season.

What were the biggest challenges in updating this map and then making a holiday version?

Renner: Lighting.  Could we make the map have that “magical” Christmas light feel, but not mess with the gameplay reads while in a night map?  Setting up gameplay in a night map is challenging enough, but selling Christmas on top of that was even more of a challenge.  There was a lot of back and forth, but I’m happy with the results.

Button: Definitely the lights strung throughout the map. We had to utilize some tech specifically for this map to get the look we wanted. In the new version each bulb is actually casting it's own light. It was pretty awesome the first time we got it up and running, but it took a lot of iterations to get there. We also very carefully recreated higher resolution versions of all the light strings from the original, some of which were upgraded to models instead of texture planes.

What sort of Easter Christmas Eggs are hidden around the map? Some are obvious, but are there some hidden ones as well?

Renner: I think as you look around the map most of the Christmas Eggs are out in the open.  I love the sleigh on the lift in the garage.  Watching your kills explode with Christmas joy.  The one that I enjoy the most is the radio playing Christmas music on the rooftop of the café.  There’s something peaceful about sitting up there with the music playing and your sniper rifle waiting for that perfect shot.

Button: There are a few sneaky appearances by a mysterious ice cream man who's decided to get into the Holiday spirit. Other than that, my lips are sealed.

The sound of this map is a big part of the design. What went into that? And who got the lucky task of recording the “HO HO HO!”

Renner: Our audio department was just as enthusiastic about the map as the rest of the dev team.  Every day we would ask, “What more can we do?”  What is the one thing that is “Christmas” to you?  We had the lights, the tree, snowman, candy canes, gifts, the sleigh.  We needed the music and our guys absolutely delivered.  Once they put their mix it there wasn’t much that was missing.  I highly recommend playing the map as loud as you can with 5.1 surround sound.

Button: There was a lot of discussion about what we could do to make this map  feel more special in every aspect and sound was a huge part of that. There's a lot of great ambient stuff like jingling bells and ornaments. I especially love the music playing on a few radios scattered throughout the map. We got a huge kick out of the confetti explosion the first time they went in also.

As far as the recording goes, I'd have to confirm with our sound department but I believe we used the original "HO HO HO!", which was of course originally voiced by Santa himself.

Any tips for players on this map?

Renner: Have fun.  This map was so much fun to work on.  Our hope is that fun translates to our players.

Button: In Crash I'm always a fan of holding the restaurant with a few friends, and now you've got some great tunes on the roof and cookies inside to boost morale. You can also hide in the tree in the middle of the map, which is new to Winter Crash, but isn't as effective as you'd think, mostly it's ​just good for a few laughs

Special thanks to Stephen, Mike and Mike for letting us do this interview. Winter Crash is running in a 24/7 playlist right now, so jump into the holiday spirit, hide in the Christmas tree, and watch out for Santa’s presents!

For more intel about Call of Duty: Infinite Warfare and Call of Duty: Modern Warfare Remastered, be sure to visit CallofDuty.com and follow @CallofDuty, @InfinityWard and @RavenSoftware on Twitter.