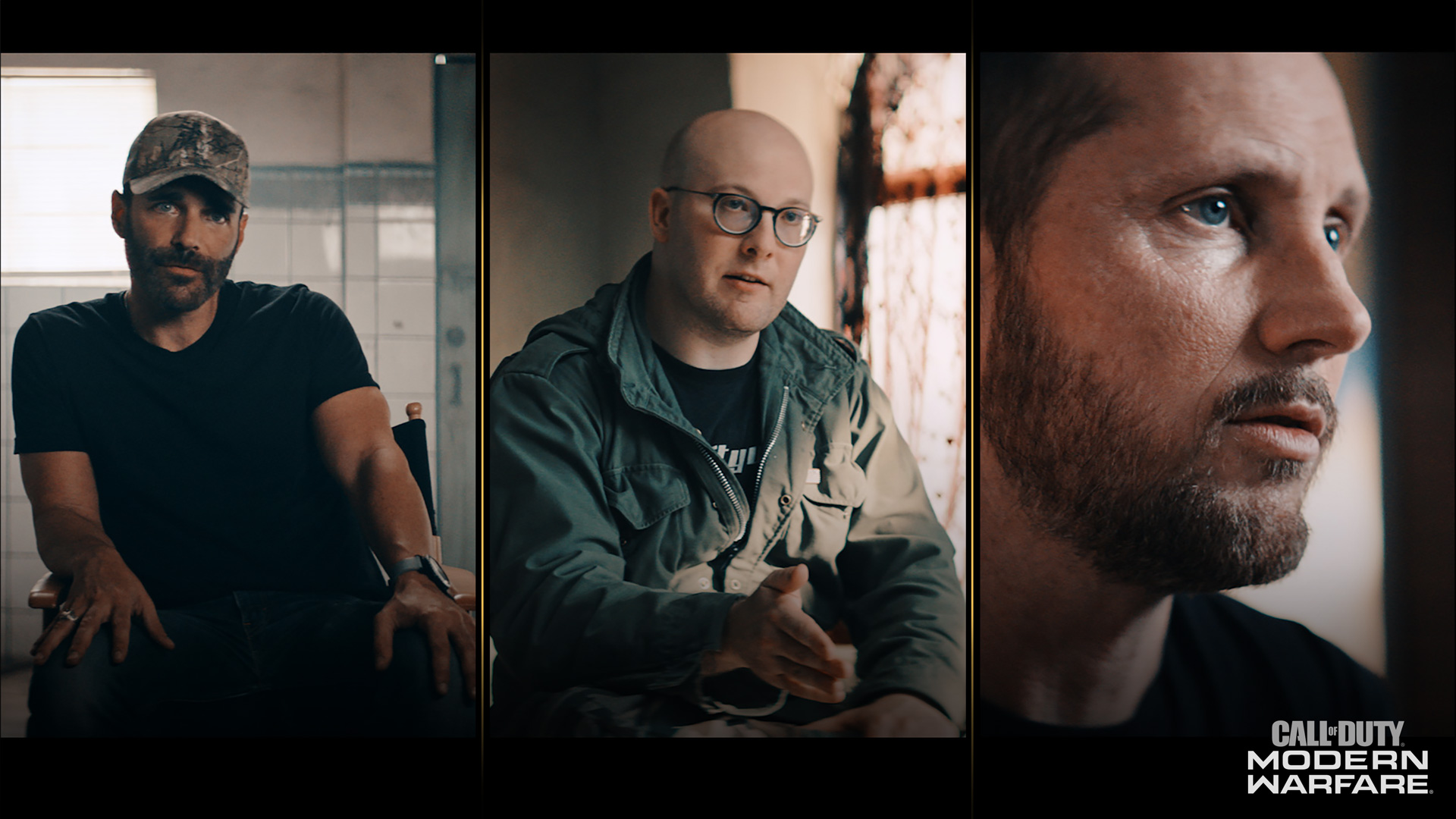 In 2007, Infinity Ward released Call of Duty 4: Modern Warfare®, reflecting the complexities of contemporary warfare through its Campaign. At the time, the game, as well as its sequels, set itself apart weaving its single player story through the sociopolitical action taking place 24/7 on a global scale.

From the beginning, it was an honor to return to Modern Warfare. The original game made an incredible impression on fans, and the developers relished the chance to reimagine this universe for a new tale. This was an amazing opportunity, and one that required some careful planning and forethought.

“War has always been incredibly complex,” said Taylor Kurosaki, Infinity Ward’s Narrative Director. “In our more complex world that we live in today,” he continued, “we realize that there are no clear-cut good guys and clear-cut bad guys. We are all shades of gray, and we have to rely on our own conscience to take us through and navigate these complex scenarios. That’s what Modern Warfare is; we don’t say that there are good guys and bad guys. Everybody is the hero of their own story.” 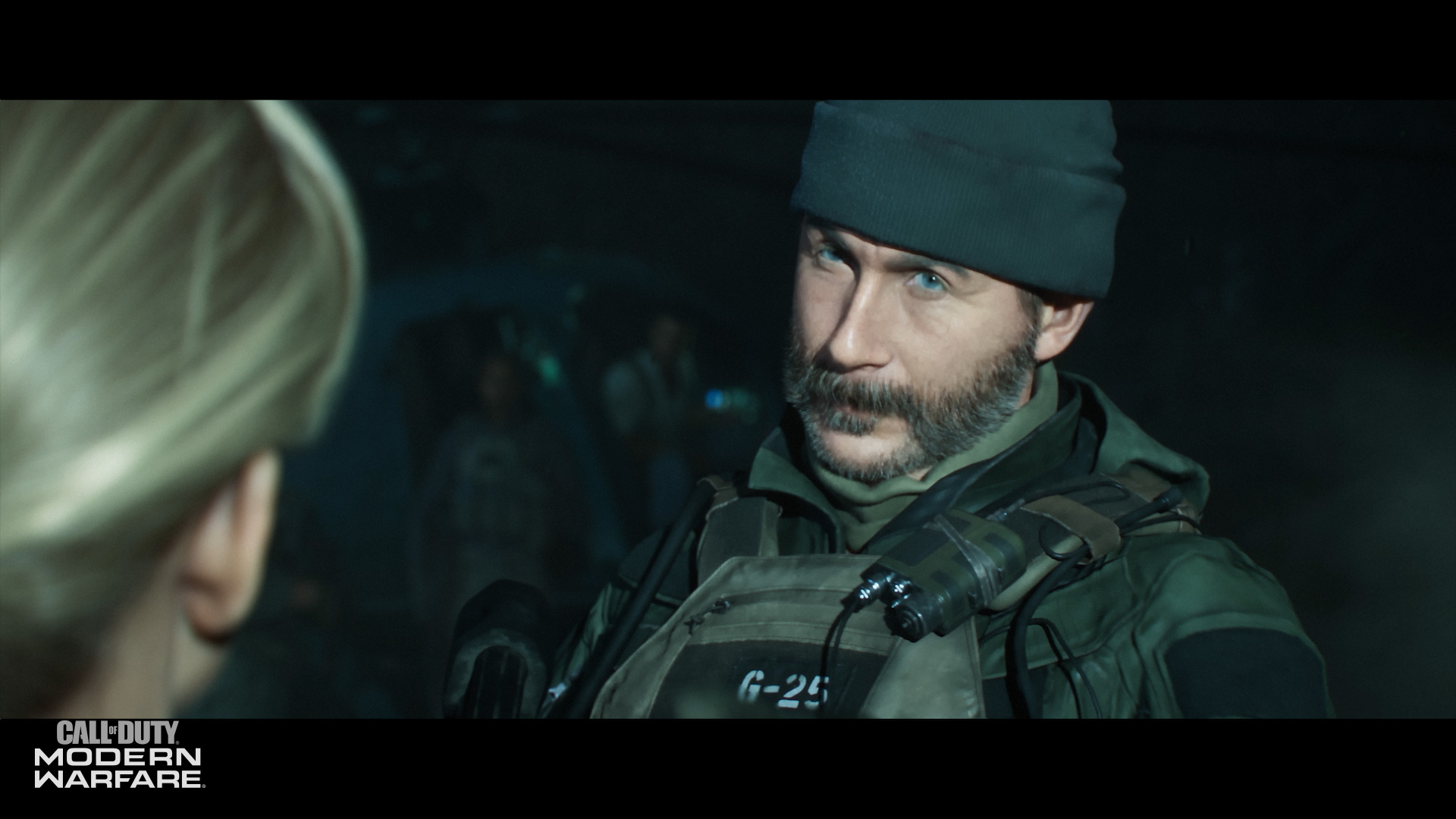 During Kurosaki’s career, he took a hiatus to pursue ventures outside gaming within the TV industry. When he came back, he fell in love again in writing for an audience of one – that being the person playing the game.

“What's great about games is, rather than just seeing a protagonist on screen and empathizing with someone else that's external to us, we get to be that person,” Kurosaki said. “We get to walk a mile in their shoes and grow and evolve and actually inhabit them as they-as they figure out how they're going to overcome these obstacles.”

Whether it was editing for TV or writing the narrative for blockbuster video games, he emphasized how storytellers want their audience to feel empathy for the characters in their story.

Not only has Infinity Ward evolved in how they told stories, but the medium itself also grew with them. Kurosaki mentioned how games in the 2000s didn’t have the fidelity to show subtle facial expressions, such as when someone’s eyes dart to show they might not be truthful, which give an additional layer of storytelling on top of dialogue.

“We have full performance capture where you're not only capturing the actor's movements,” Kurosaki explained, “you're capturing their facial expressions and their voices all simultaneously. We can have a level of fidelity and realism that we couldn’t have achieved before.  And that allows us, if we're willing to, to tell these deeper, richer, more immersive stories.” 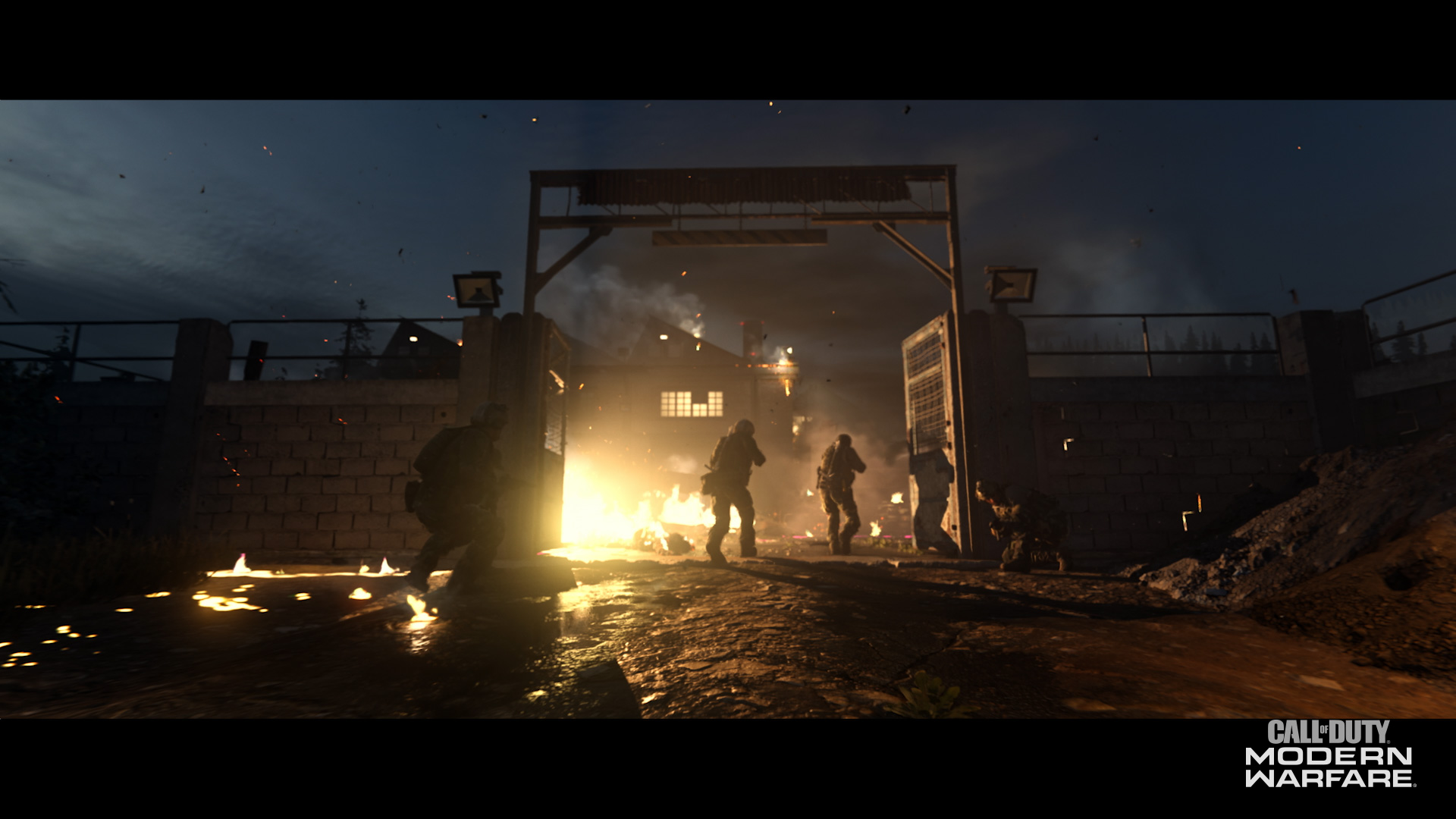 Fans of the Franchise Willing to Push Boundaries

Jacob Minkoff is not only Infinity Ward’s Single Player Design Director, but also a fan of the franchise since he modded the original, first Call of Duty back in 2003.

When designing the single player campaign, he drew on his own experiences of the original Modern Warfare series.

“When I was playing the first Modern Warfare back in 2007, I remember playing the ‘Death from Above’ mission and I felt profoundly uncomfortable in that moment,” Minkoff said. “I was firing down at enemies who could not fire back at me, and it felt dishonorable. It felt wrong, since I’d been watching Operation Desert Storm on the news and I'd been seeing footage from Gunships, but it was only once the controller was in my hand that I really understood what asymmetric warfare means… The moral complexity of that only hit home once it was in my hand as a player.”

To that extent, Infinity Ward tried to capture how wars are fought today within this Campaign, as acclaimed narrative writer Brian Bloom, explained.

“These are not naval battles out in the open Pacific. This is not trench warfare in the field. In many cases these battles are happening in people's homes, in their kitchens, on their terraces, on their second floor, in their bedrooms, in their bathrooms, in their hallways, where they grow their food, where they drink coffee…” Bloom continued. “We worked hard to include all of those things and to have our players face down those aspects of modern warfare.”

For example, one mission takes Captain Price and you, playing as Kyle Garrick, through a townhouse raid, with the whole squad taking a tactical approach to find their high value individuals, or HVIs. 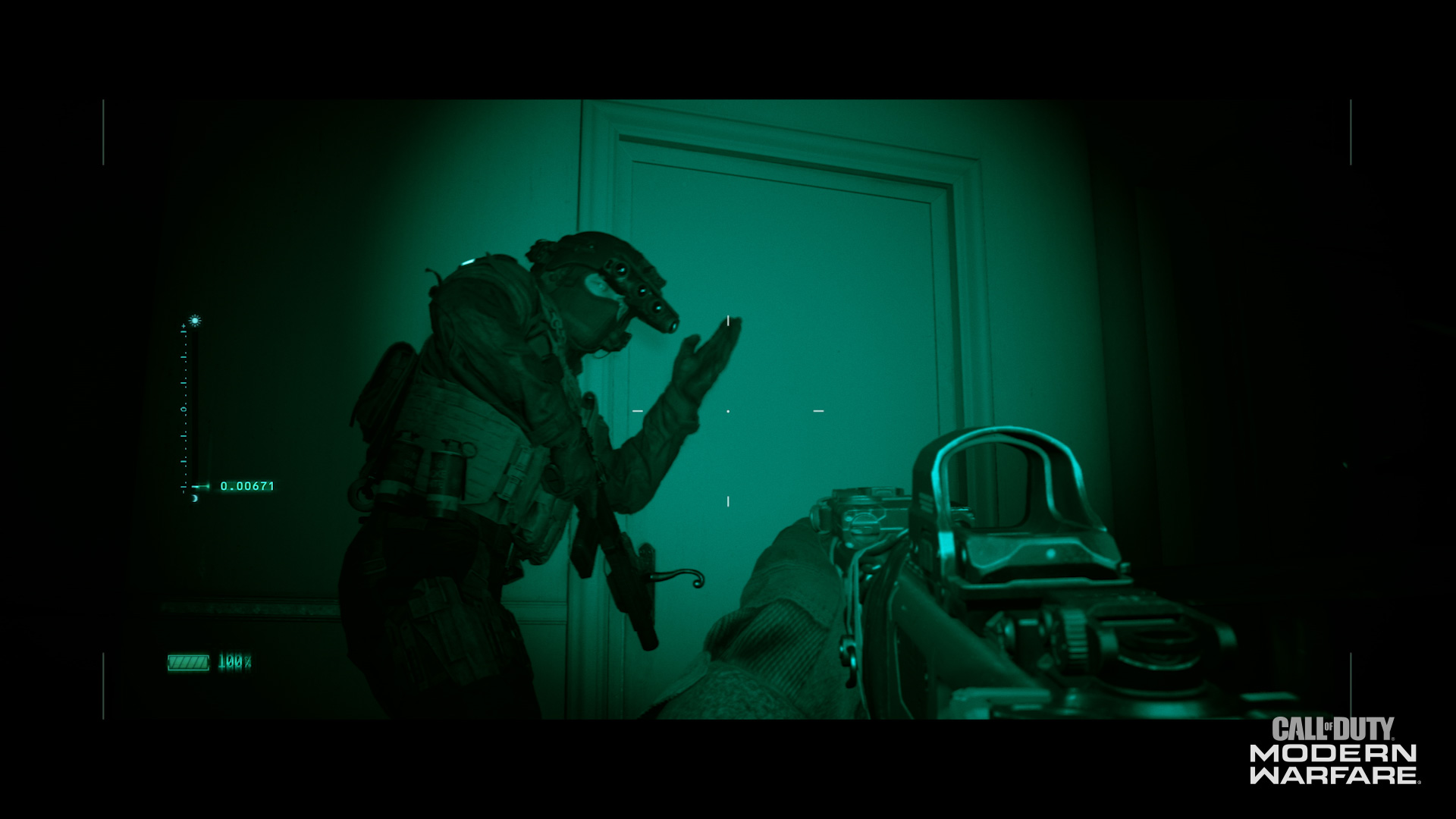 Normally, Minkoff explained, a video game designer would expand the area of play so that gameplay mechanics, such as artificial intelligence or in-game physics, were not hindered. However, with Modern Warfare, Infinity Ward created this home to scale.

“Not only does it feel, in an almost intangible way, much more realistic than you’ve ever experienced before,” Minkoff said, “but it’s also much more claustrophobic; it feels more dangerous with its blind corners. And you then start to understand why the SEALs and the SAS have developed these particular ways of clearing buildings to deal with all of these different angles that can be very dangerous to approach in a real house.”

On top of this, making this townhome on a one-to-one scale allowed the team to fit the play area on one motion capture space and watch how an actual ex-military fireteam would act in this scenario.

“It was almost like the way that the military would practice going through training before actually doing the real operation,” Minkoff said, “that was how we designed this mission. And as we did that, we realized that we needed to develop new mechanics.”

One such mechanic is weapon mounting; in a real operation, a soldier would do this to minimize exposure to an enemy they could see around a corner and simultaneously maximize their weapon’s stability to ensure accuracy.

“Back in 2007,” Minkoff explained, “Captain Price would always say, ‘Check your corners.  Check those corners.’  But you didn’t have to, right?  The game was tuned as such that you really didn’t have to follow Price’s instructions. Now, when Price tells you ‘Check your corners,’ you will die if you don’t. Adding this more tactical type of experience to Modern Warfare has been driven by our goal for you to really understand how modern war is fought.” 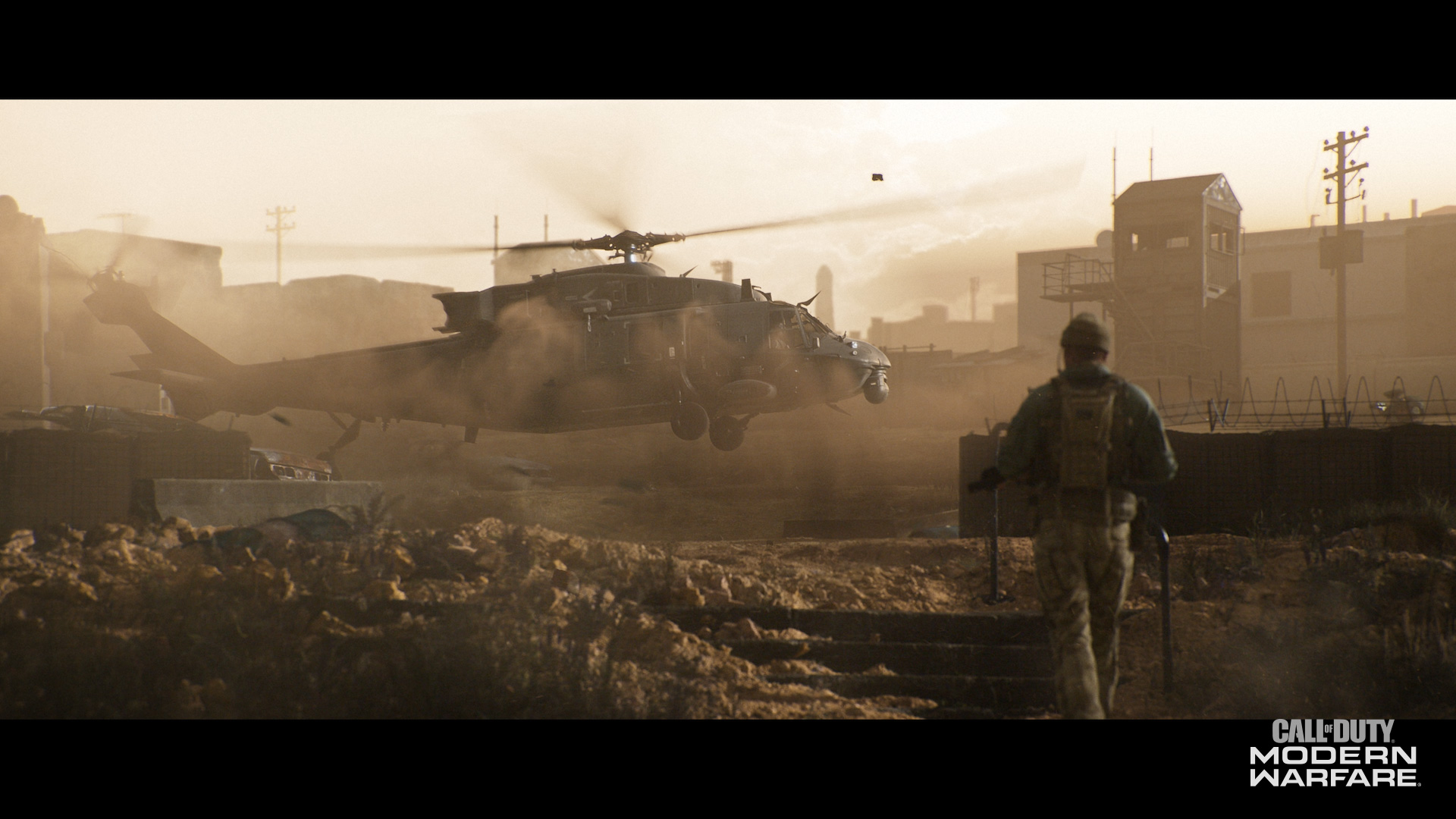 During the development of Modern Warfare, the team surveyed fans on what kinds of war stories they’d like to see in a TV show, film, or video game.

“Without a doubt, they said, over and over again, they want to see morally complex characters that are not a hundred percent good nor hundred percent evil.  They wanted a much more realistic depictions than they've ever seen before,” Kurosaki said. “It was really nice to have the validation of our fans and our players; they are a sophisticated audience.  They want something that feels authentic.”

“You can't just make some white hat, black hat adventure, fans know better,” Kurosaki continued. “[We give] our fans what they expect [and] deserve. And hopefully with Modern Warfare, we've done that.”

To that point, Bloom mentioned how this Campaign wasn’t just the product of those at Infinity Ward; they used all the resources they could, especially when it came to their consultants.

“You may sit with some people who are tired of hearing me call them or text them, at two in the morning, desperate to figure out something and asking, ‘How do you say this? How would you do this?’ Or, ‘We have something we're cutting; help us, shore it back up,’” Bloom said. “We don't work in a vacuum; we’ve put our pride aside and we have exposed our work to people who can help us get it right.”

Over the next two parts, we’ll introduce four of those consultants who helped Infinity Ward create this authentic narrative, which you will experience when Call of Duty: Modern Warfare launches on October 25. 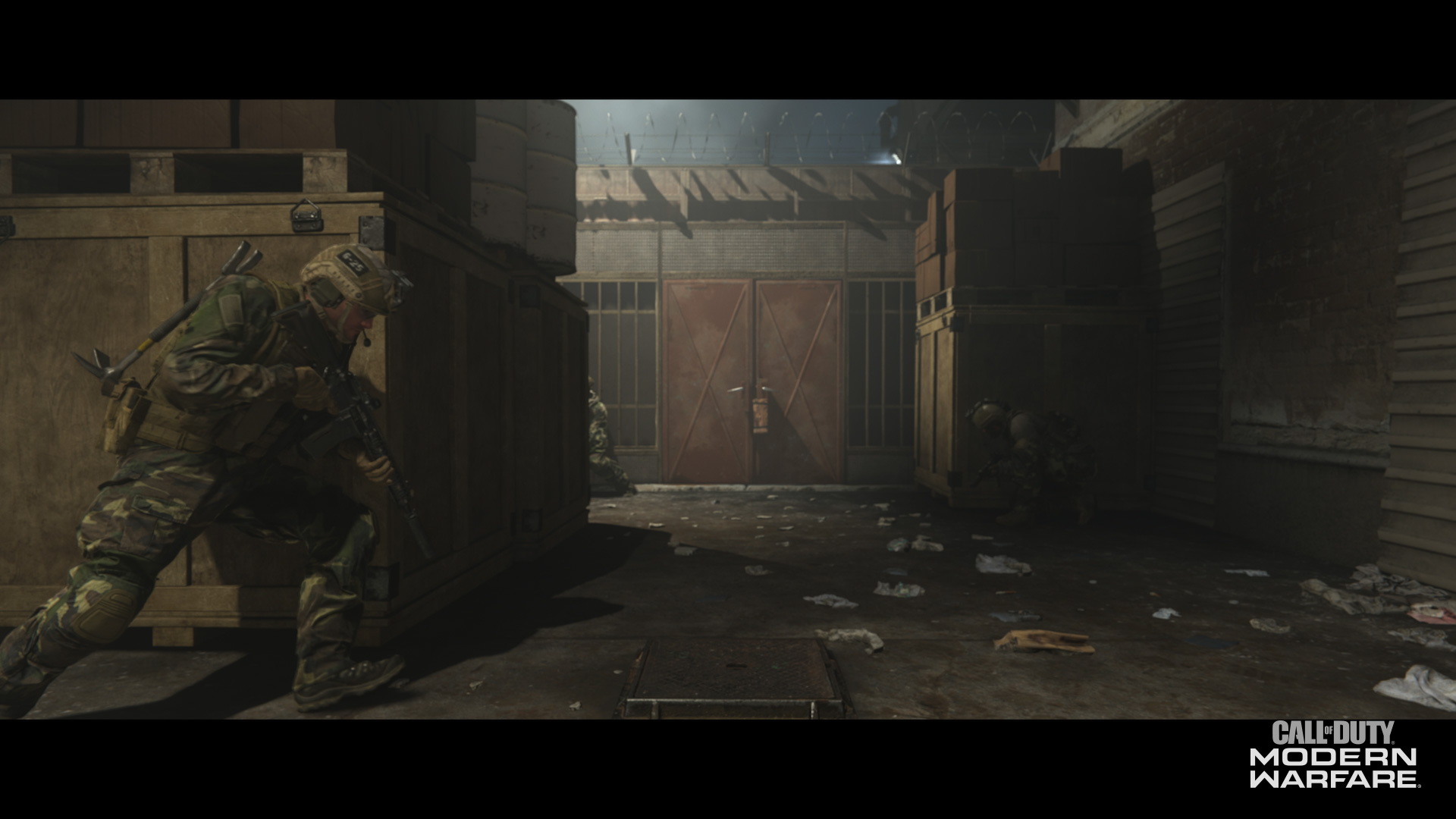