The lush, gorgeous world of Sengoku Japan comes to life in FromSoftware’s Sekiro: Shadows: Die Twice. As players at Gamescom get the world’s first hands-on experience with the game, we spoke to FromSoftware’s Marketing Manager Yasuhiro Kitao to get a taste of what we can expect to experience when the game launches on March 22, 2019. 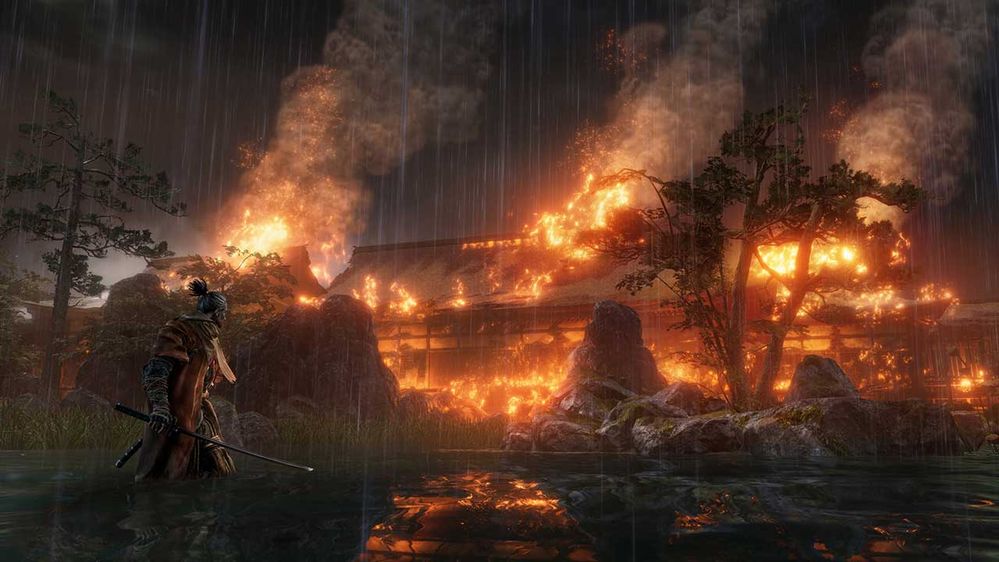 What new parts of Japan's rich history have you focused on for the setting of Sekiro: Shadows Die Twice, and why did you choose that particular time period and location?
The closing years of the Sengoku period, the Age of Warring States which lasted until 1568, was chosen for the setting. This time period was chosen as it feels – at least to us – more “medieval,” where aspects of time-honored Japanese mystery still thrive.

Sengoku is naturally also associated with images of bloody, uncivilized combat, which gelled well with the ideas that game director Hidetaka Miyazaki had regarding a ninja. Lastly, having Sekiro: Shadows Die Twice in the closing years of that period lets us depict the end of an era, and the explore the beauty that lies within something that is on the verge of ruin.

Speaking of the setting, the game looks particularly beautiful. What did the artists use for research?

The artists researched various films, manga and novels with a similar setting and style.

What do you want players to feel when the experience Sekiro: Shadows Die Twice for the first time?

We wish for players to experience our unique take on “ninja roleplay.” New actions such as jumping and the Grappling Hook in particular open up the world and change how players can navigate it. These options add a new level of dynamism, enabling us to get creative with hidden secrets and surprises. We’re looking forward to having players dive into the world to see what they can find.

Japanese action games have seen a lot of play in our industry. What design decisions did FromSoftware make to set this game apart?

What players can expect is a FromSoftware style re-imagining of Sengoku Japan.
Everything from the battle system, the setting, story, characters, mechanics: all of them are unique to this game and have not been seen in a FromSoftware title before.

The traversal aspects and stealth in particular are part of the vision of providing more strategic options than ever before. From a design perspective, this wealth of strategic options makes for interesting gameplay when the odds are heavily against you.  Are you confident enough to run straight into a room filled with terrifying enemies and face them head-on? Or do you play it hit and run, using wirepoints and assassinations to take out the snipers and weaker enemies first, then 1v1 the big guy? Or do you go the ambush route, and wait until they’re all clustered up to use a stun move and kill several quickly? There are many different options the player can employ, and all of them are viable. We’re looking forward to seeing how creative players can get. 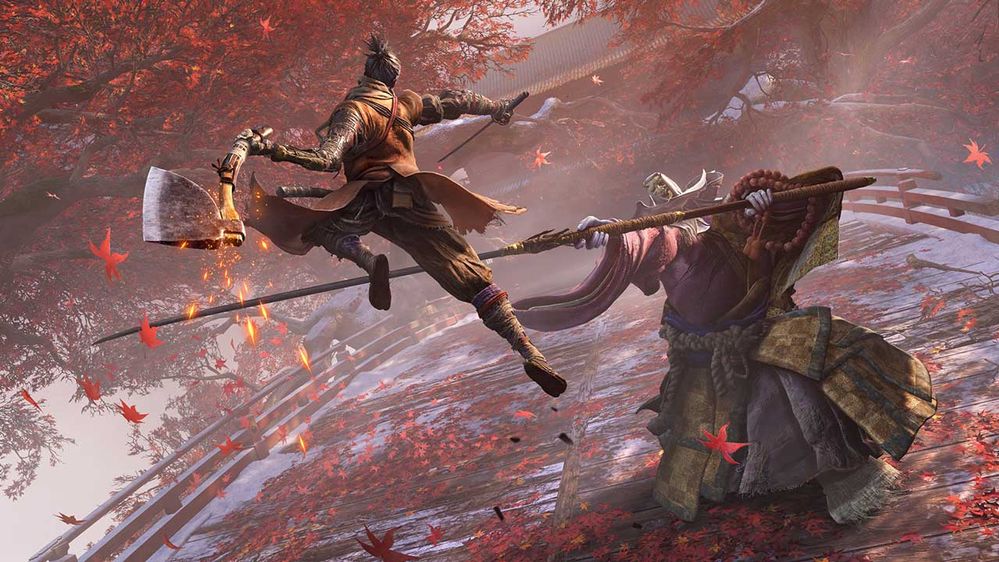 What was the thought behind giving the protagonist a prosthetic arm as part of his story?

Right from the start, we wanted to design a game that fit with the ninja theme and to prepare a number of different ways the protagonist could exploit the environment as well as enemy weaknesses. The idea of a prosthetic limb provided this versatility. It quickly solidified as a key aspect of the game’s combat, and even formed part of the protagonist’s identity. At the outset of the story, he experiences a great deal of loss, but at the same time this fuels his retribution and that loss is replaced by a newfound strength.

What is so special about that prosthetic arm? How can it help a player navigate across villages or take down enemies?

The Grappling Hook is a permanent feature of the Shinobi Prosthetic, providing new and interesting ways for the player to traverse the landscape, explore and engage in combat. Prosthetic Tools allow for various attachments and tactics, which fit with the “anything goes” philosophy of the ninja. These Tools not only act as support for the sword combat, but also allow for a certain amount of accentuated style that is sometimes not possible with conventional weapons.

What do you think players will enjoy most about the game's combat system?

We hope that players will enjoy a multitude of ways in which to approach combat. From the furious clash of steel in a one-on-one katana duel, to utilizing stealth to get the drop on an unsuspecting foe, or discovering enemy weaknesses through the use of Prosthetic Tools, players are free to engage on their own terms and adapt to each situation.

FromSoftware originally developed the Souls series and Bloodborne. For players coming into Sekiro: Shadows Die Twice having played those games, what will they notice?

Players coming from previous FromSoftware titles will find familiarity in responsive action, a feeling of deliberation to the combat, and a sense of accomplishment from besting intimidating enemies. In addition, we have a new Resurrection system to maintain the pacing between each encounter, dynamic movement both in and out of battle, and a gorgeous, brand-new world ready to explore. 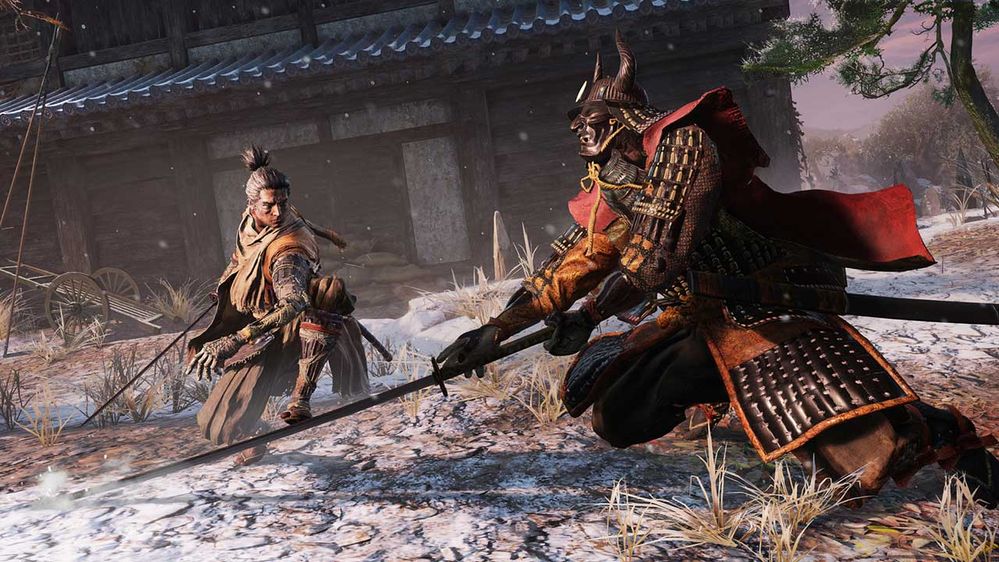 Is Sekiro: Shadows Die Twice just as challenging as some of FromSoftware's toughest titles?

When we design games, we don’t wish to make them intentionally difficult just for the sake of it. The challenge comes from a desire to create that sense of triumph from overcoming tough situations. Sekiro: Shadows Die Twice is no exception. Still, if players opt to tackle situations head-on, they will likely find this game just as challenging as FromSoftware’s previous titles, if not more so.

However, we have prepared more strategic options than before. We hope players use everything at their disposal, from martial arts to technical Prosthetic combos, in order to conquer each situation.

With all that said, do you expect that this game will appeal to seasoned gamers and newcomers alike?

We hope seasoned players find appeal in using everything at their disposal in order to conquer seemingly insurmountable odds. At the same time, we would like as many people as possible to experience the exhilaration of overcoming the challenges within. To this end, there are various strategies in place which can be uncovered and employed by players who aren’t as well-versed in action games.