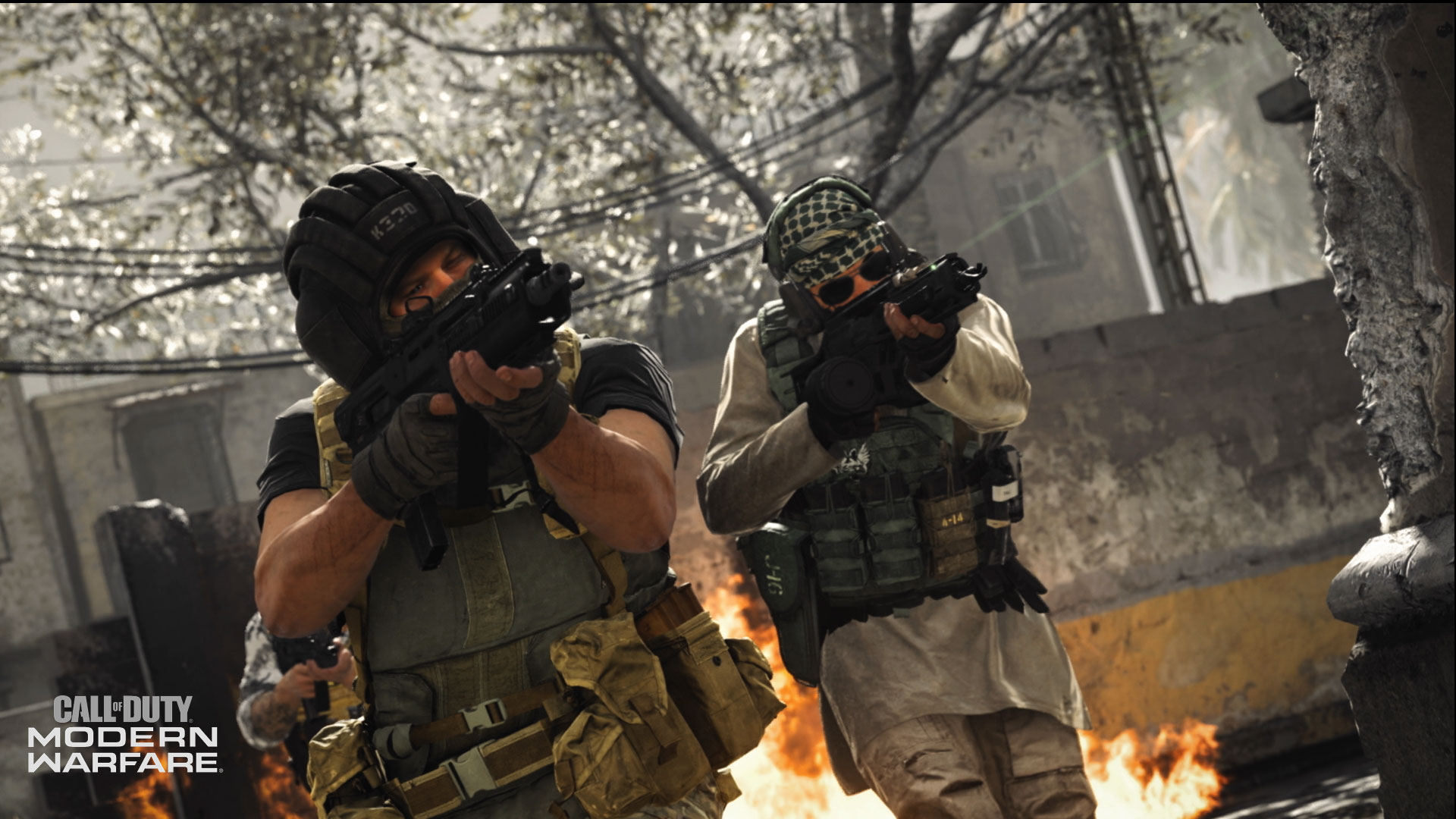 Those who have climbed up the Battle Pass past Tier 31 might have already played with the RAM-7, the newest assault rifle in Call of Duty®: Modern Warfare®.

By this point in the season, you may have already unlocked it – as well as its Corrupter Blueprint, if you have the Battle Pass – and maybe even levelled it up to earn a few attachments.

However, assault rifle users sometimes go back to their bread-and-butter weapons with dozens of weapon levels on it, which brings up our case for dusting off the RAM-7 and making it a staple in your loadouts.

Here’s a breakdown of what makes the RAM-7 far from the black sheep of assault rifles, from its basic stats to five loadouts that we recommend for your next Multiplayer session: 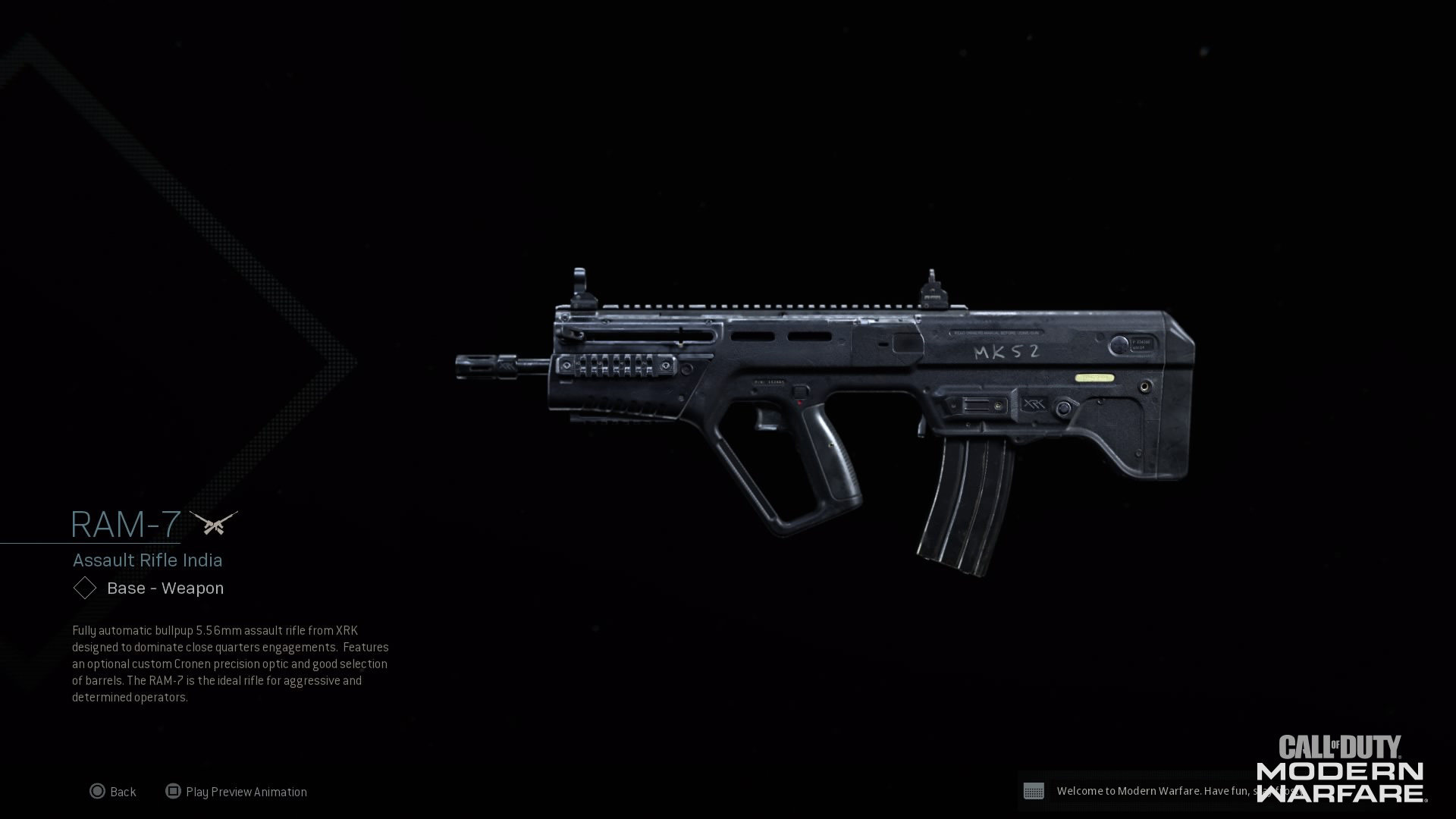 Like its Season One sibling, the Holger-26, the RAM-7 fits a hybrid role between a true assault rifle and a submachine-gun. A fast rate of fire and solid mobility stats makes it competitive in close-quarters against SMGs, but its damage output and manageable recoil allow it to hold its own at longer ranges.

Yes, even though its recoil can be tricky to manage at first, mounting onto a wall or ledge, or firing in selective bursts, can tame this deadly beast. Alternatively, a few recoil stabilization attachments could also help you deal with its side-to-side recoil, allowing you to focus on steadying its vertical kick.

Although the RAM-7 has a fast fire rate – on-par with the M13 and other fast-firing assault rifles in its class – its 30-round magazine size could leave you high and dry after a few engagements. There is an unlockable 45-round magazine within the RAM-7 progression path, but when – and if – you decide to unlock and use it, it may be best to reload it away from combat after you take down an enemy.

Speaking of magazines, the RAM-7 is chambered in the standard 5.56 NATO cartridge. This common ammo type makes it easy to pick up reserve ammo in the field, even without Scavenger, as weapons such as the Kilo 141 and the Holger-26 also use this ammo type. 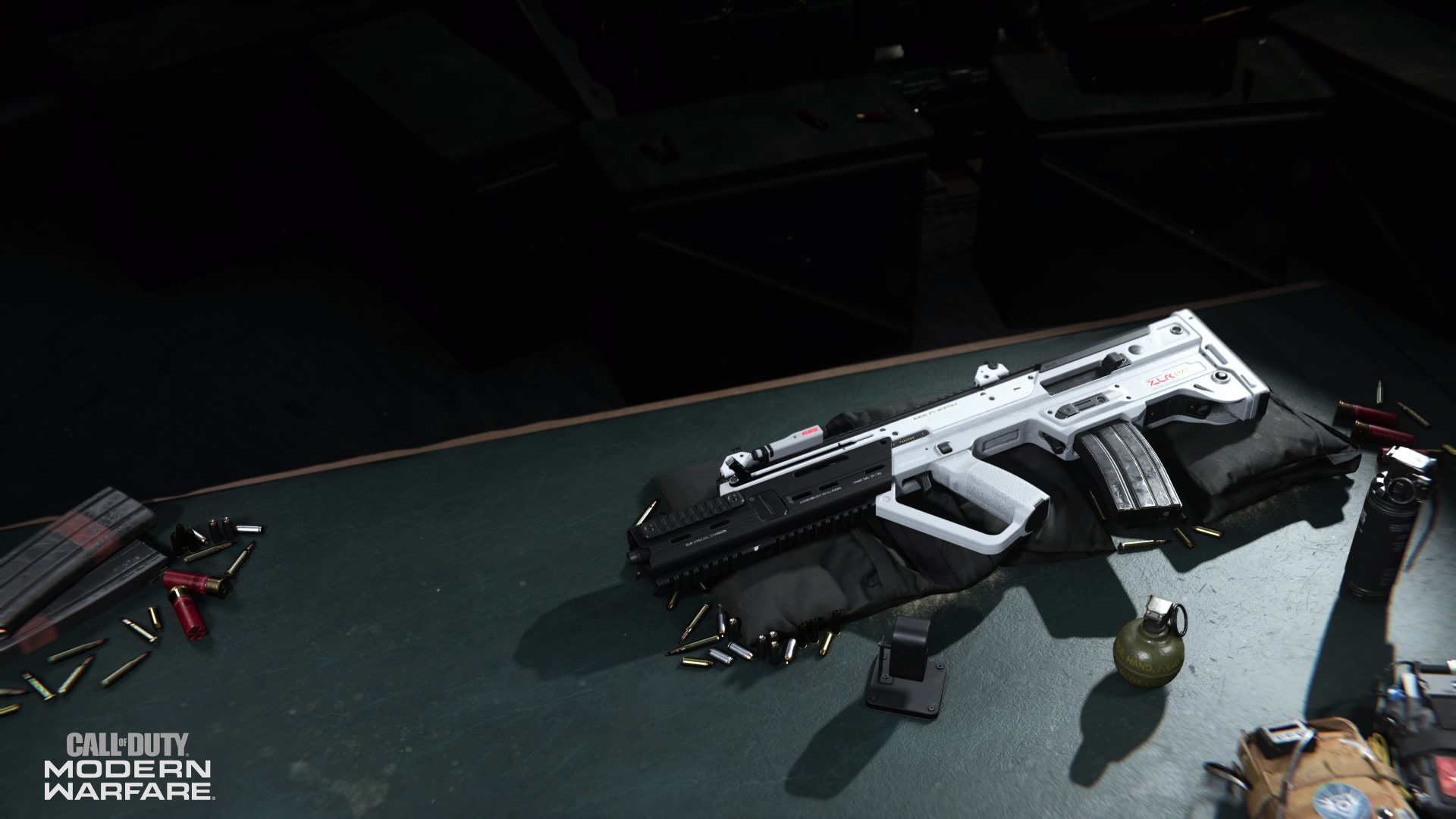 At the end of the Battle Pass – Tier 99, to be exact – Battle Pass holders will earn the Corrupter Blueprint.

This five-attachment modification to the RAM-7 gives it a great mix of attachments, as the FORGE TAC Eclipse extends the weapon’s effective range while the Tac Laser and XRK Close Quarters Stock allow for faster aim down sights.

Given the RAM-7’s tendency to run out of ammo fast, the Slight of Hand Perk seems natural as a fourth attachment. As for the Corp Combat Holo Sight (not pictured), it allows for a better precision sight picture and mitigates the RAM-7’s muzzle flash, which can be distracting when aiming and firing. 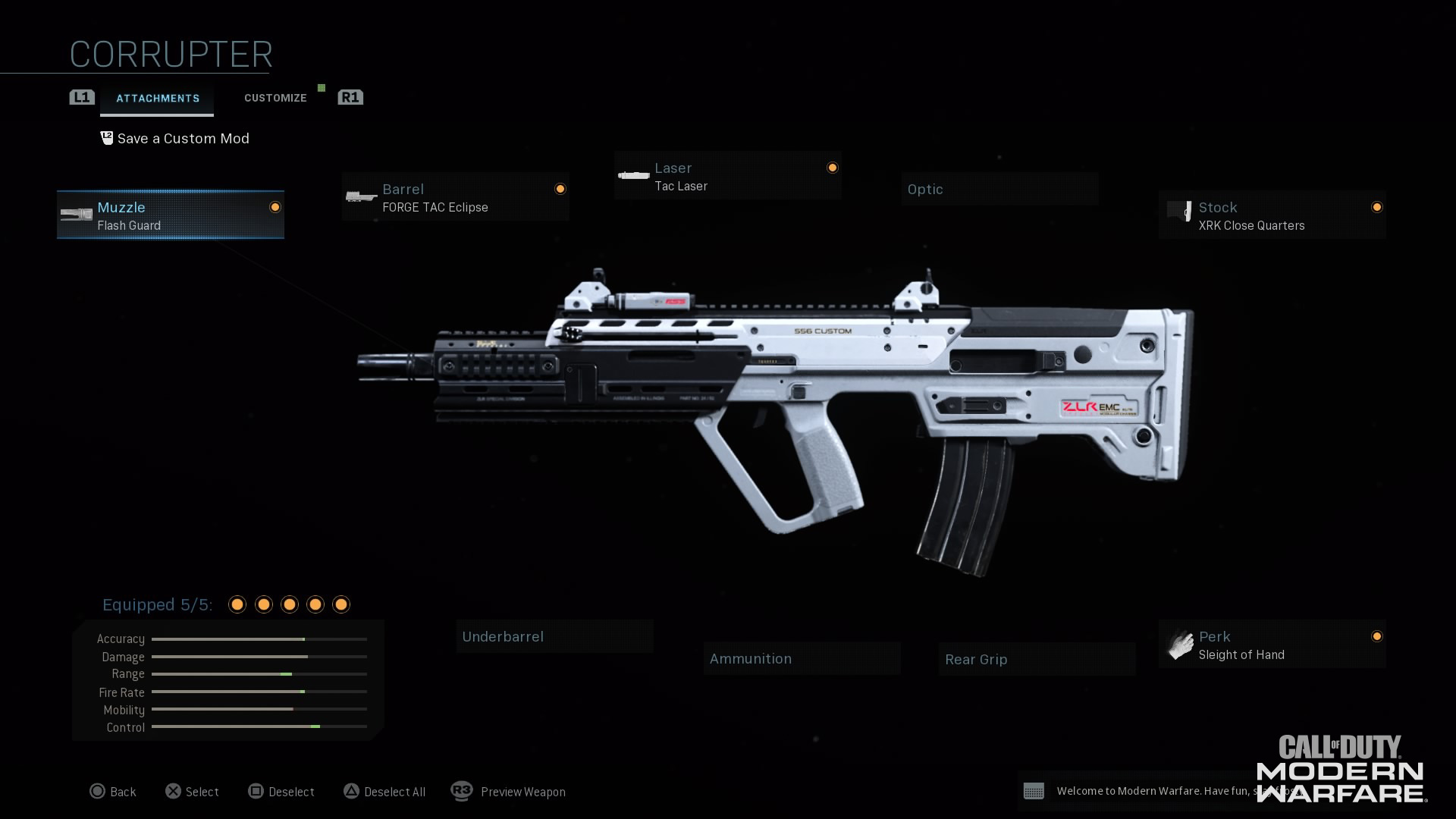 All these attachments, plus the blueprint’s awesome cosmetic finish, make the Corrupter the first of our recommended loadouts.

The Corrupter is a well-balanced blueprint that makes the RAM-7 a capable gun at most ranges; outside of a long-range shootout with a sniper, this version of the weapon can be great at any engagement type.

Those five attachments are also unlocked late in the RAM-7’s progression path, making the Corrupter a wise choice for those chasing Gold camo or other attachments and starting from scratch at Weapon Level 1.

As seen in the above, we swapped out the Corp Combat Holo Sight for the Flash Guard, an attachment unlocked early enough to help with the weapon’s muzzle flash without reducing ADS speed as much as an optic. 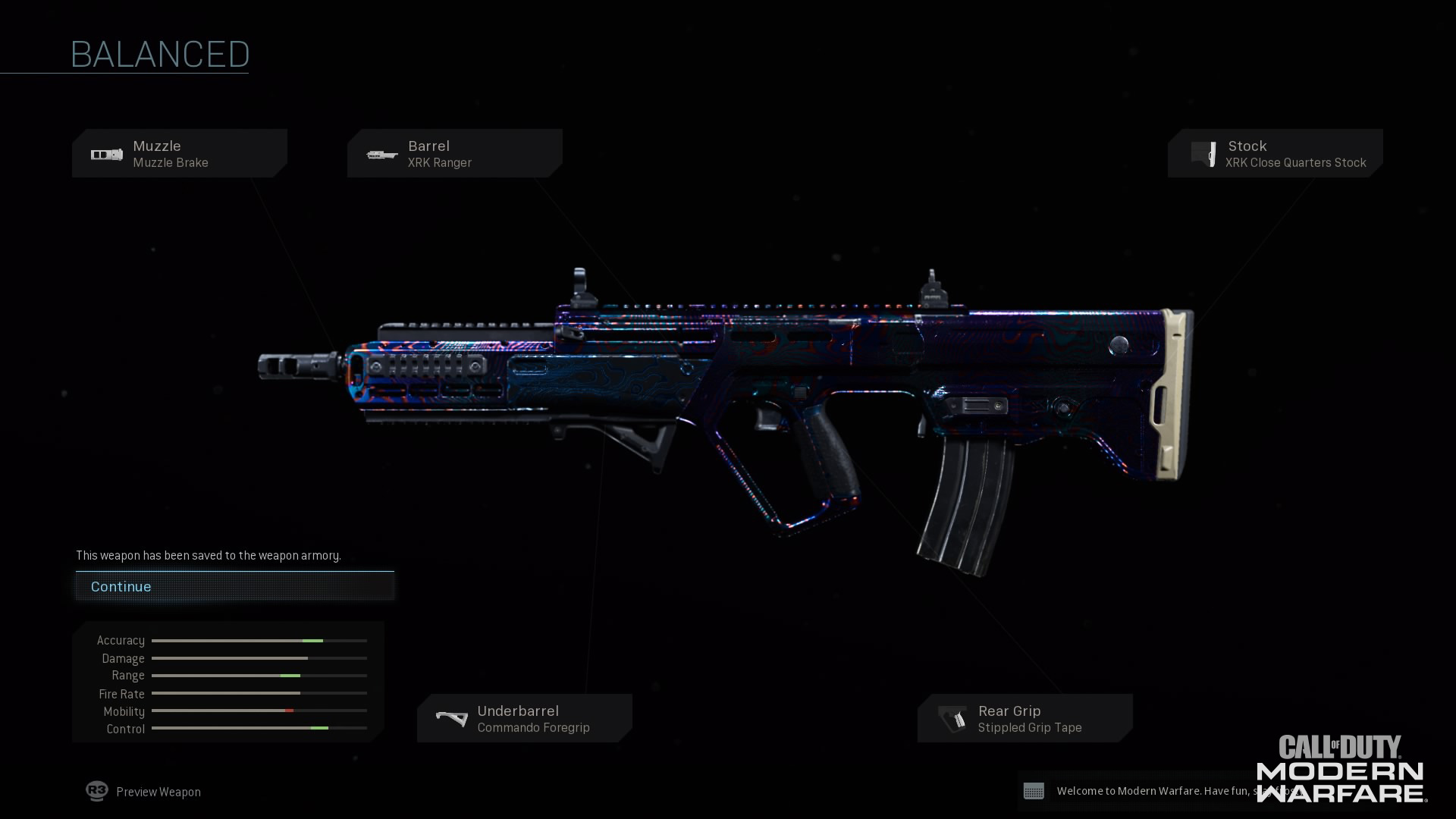 Another way to balance out the RAM-7 is to add several recoil control and stabilization attachments along with a few that cater to faster aim down sight speed.

Here, we take the Muzzle Brake and Commando Foregrip, two attachments that significantly reduce the weapon’s horizontal recoil, and pair them with the XRK Close Quarters Stock and Stippled Grip Tape, which quicken ADS speed. Although both attachments hinder aiming stability, this can be remedied by not staring down sights for too long and making the weapon sway.

The final attachment, the XRK Ranger, has built-in recoil control to help with the weapon’s vertical kick. It also extends the weapon’s damage range, allowing for a bit more leniency when it comes to four-shot kills at a distance. 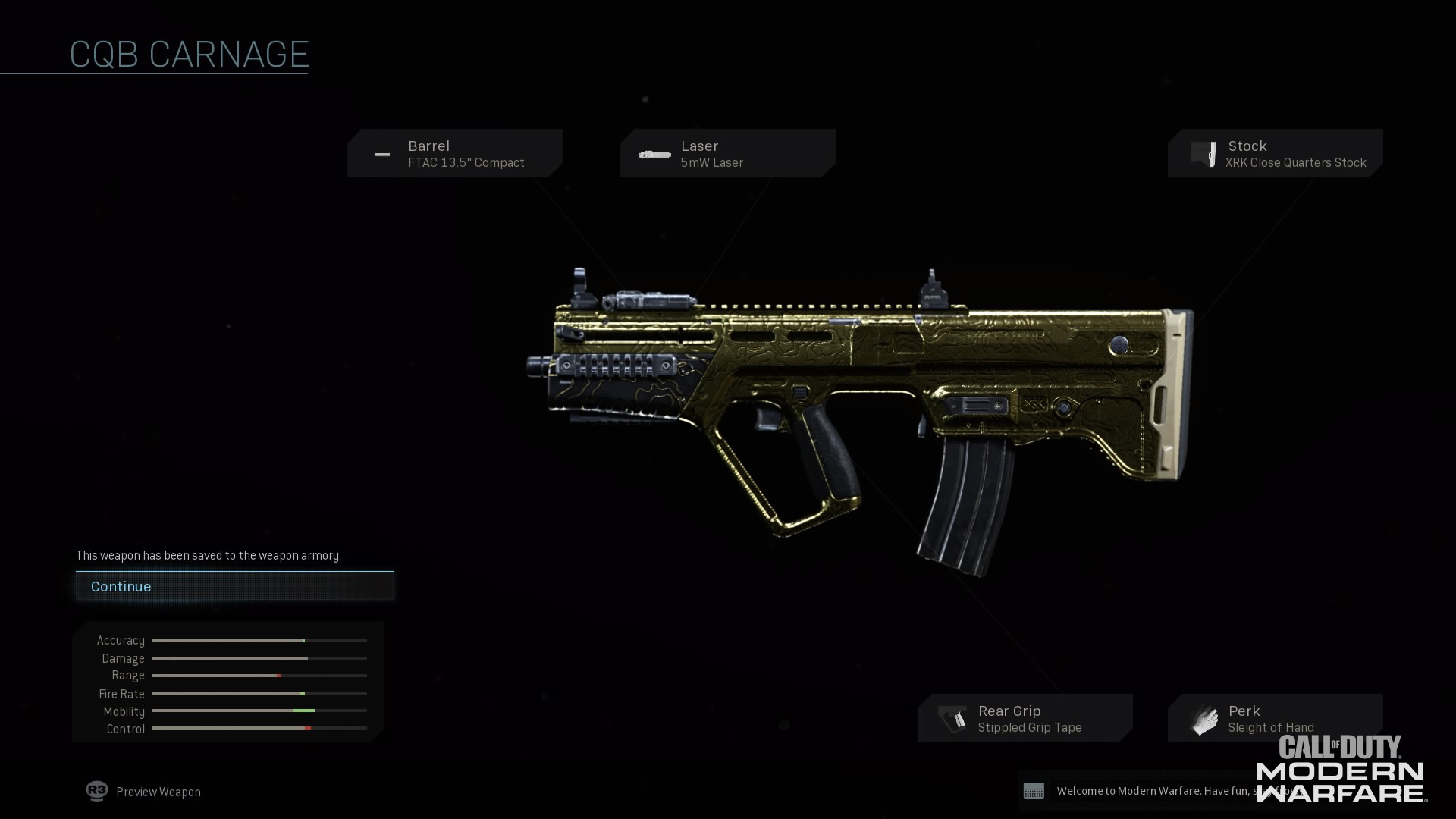 Kitting the RAM-7 for maximum efficiency in CQB engagements is also a wise choice, as with the right attachments, it can keep up with the slower-firing submachine guns up-close.

For this version of the weapon, bring back the XRK Close Quarters Stock and Stippled Grip Tape, which both help with ADS speed. The 5mW Laser will help when not aiming down sights, tightening the weapon’s hip fire spread while also decreasing the time it takes to fire it after sprinting.

The FTAC 13.5” Compact barrel adds some more recoil to the RAM-7, but in close quarters, precision aiming may not matter as much as the better ADS and movement speed it provides.

Rounding out the class is Sleight of Hand, which quickens reloads so you can get back into the fray faster. 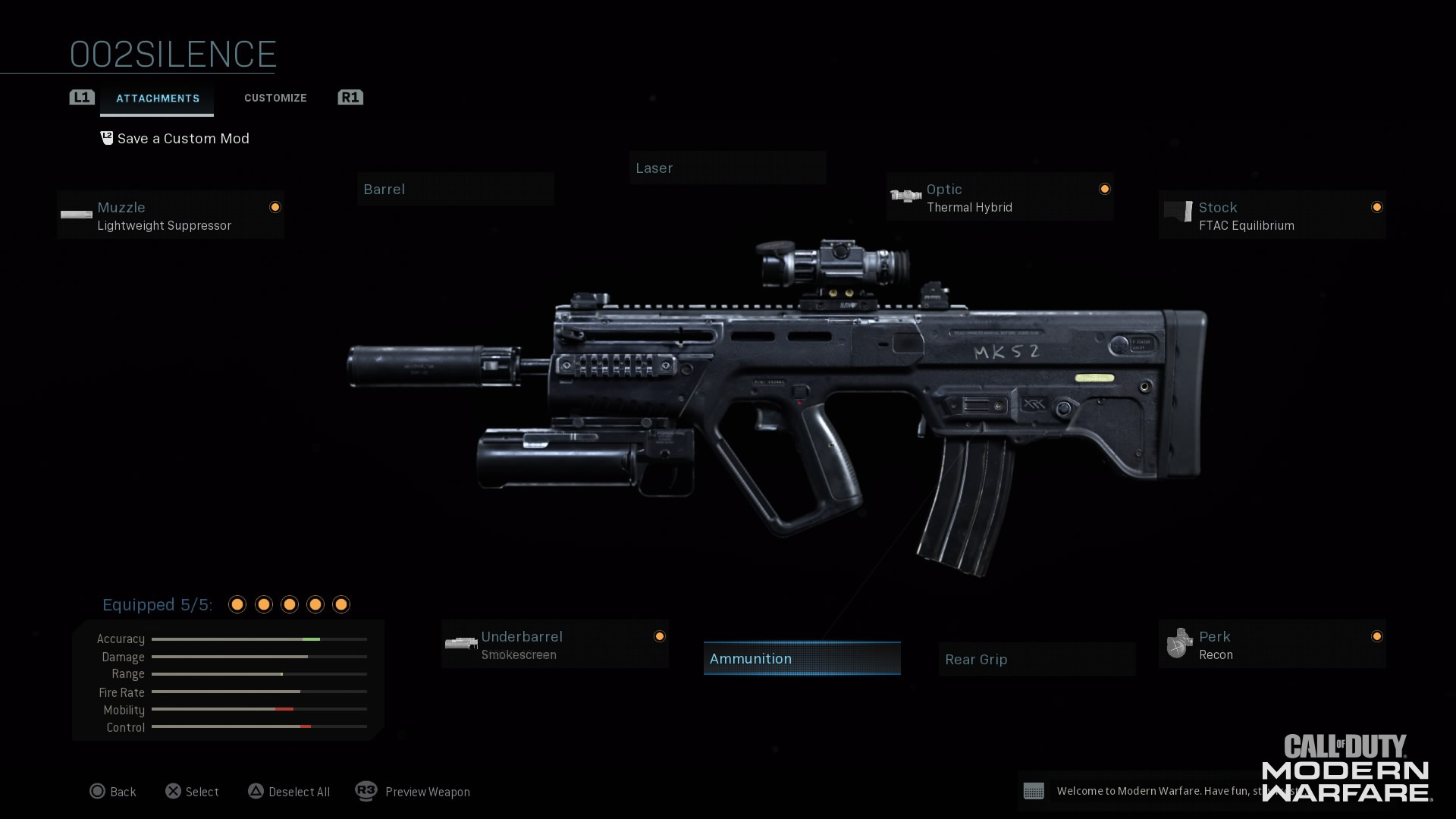 For those looking for a stealthier build, RAM-7 might be a fantastic weapon, as its fast fire rate and decent range can work well with flanking strategies.

Start with the M203 40mm Smokescreen launcher, an underbarrel attachment that can distract enemies with canisters filled with thick smoke clouds. You can then pick them off while seeing through the smoke with the help of the Thermal Hybrid Optic, which has a side-mounted reflex sight for a precision sight picture in closer ranges.

Recon allows you to see enemy nameplates at a longer distance, while the FTAC Equilibrium allows you to do that scouting down sights more stable aim.

A stealth class isn’t complete without a suppressor, and the Lightweight Suppressor does the job well with minimal cons. The reduction to damage range isn’t as bad, especially if you’re only a dozen or two meters away from your unsuspecting targets. 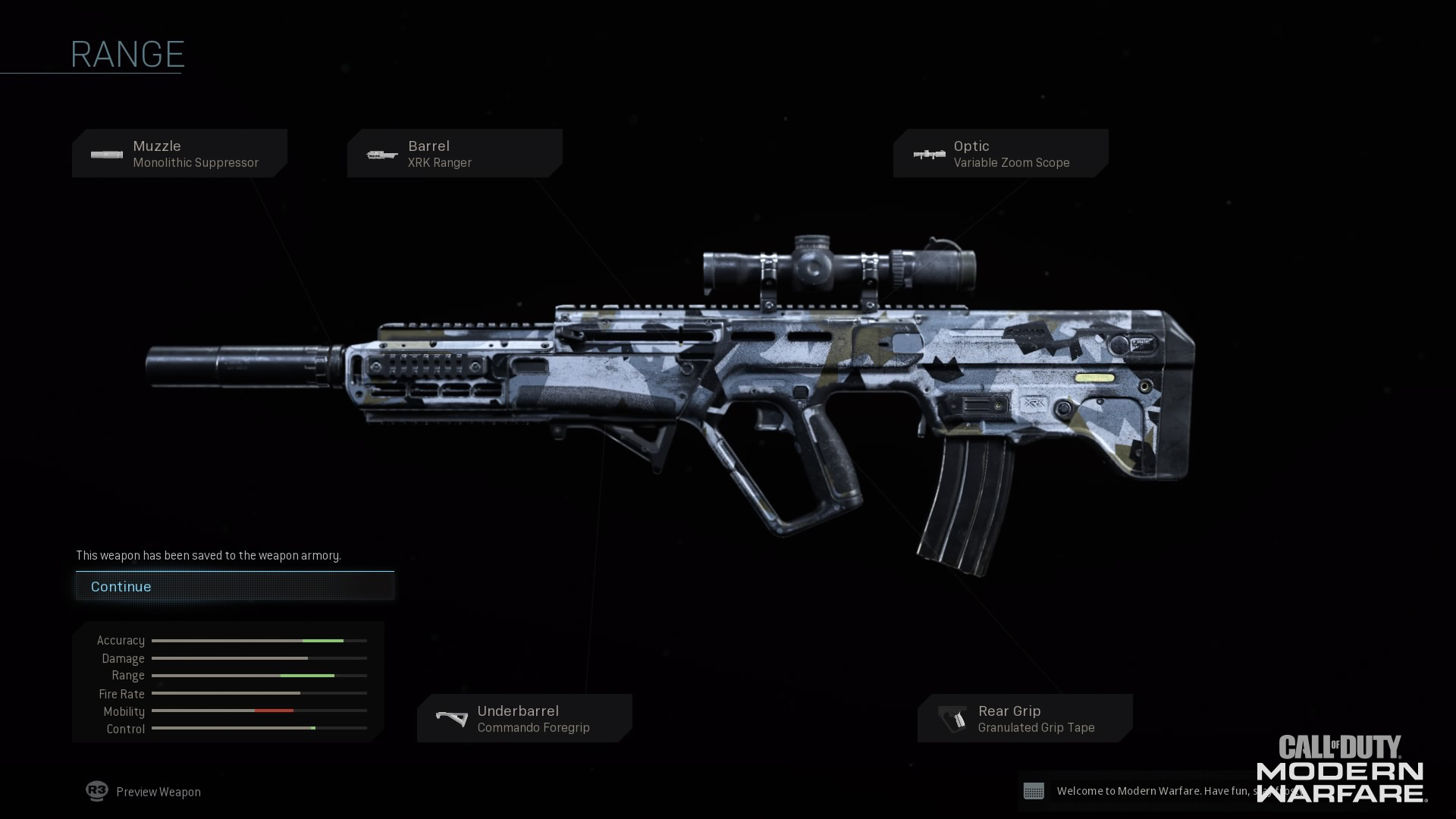 Whether it’s for Longshot chasing or Ground War preparation purposes, the RAM-7 can be outfitted with a few attachments that make it more viable at a distance.

The two attachments that specifically benefit the RAM-7’s effective range are the Monolithic Suppressor and XRK Ranger Barrel. Couple this with the Variable Zoom Scope – or the Sniper Scope, if you’re feeling it – and you have a weapon that is maxed out at seeing and hitting enemies at range.

With long-distance shots comes the importance of a stable aim, which is where the Granulated Grip Tape shines. Last, but certainly not least, the Commando Foregrip provides additional aiming stability while also helping you deal with the weapon’s horizontal recoil.

For those who like to see the exact progression track you’ll be on for the RAM-7, here’s a detailed breakdown of everything you’ll unlock for it, along with some notes for milestone unlocks:

A milestone level that offers the first replacement optic for the iron sights. While other, more stylish, options are available further down the line, this Mini Reflex could be a solid attachment through the entire progression track.

The first underbarrel weapon offers an additional lethal option to the already deadly RAM-7. Don’t hesitate to pick this up, or another underbarrel launcher or shotgun in later levels.

Need to get one-hit melee kills without pulling out a knife? Throw this attachment on and dive into close-quarters combat with a bit more confidence.

This hybrid scope may be great for Ground War or other large maps; pair it with a barrel extension, and you may find the RAM-7 more effective at longer ranges. 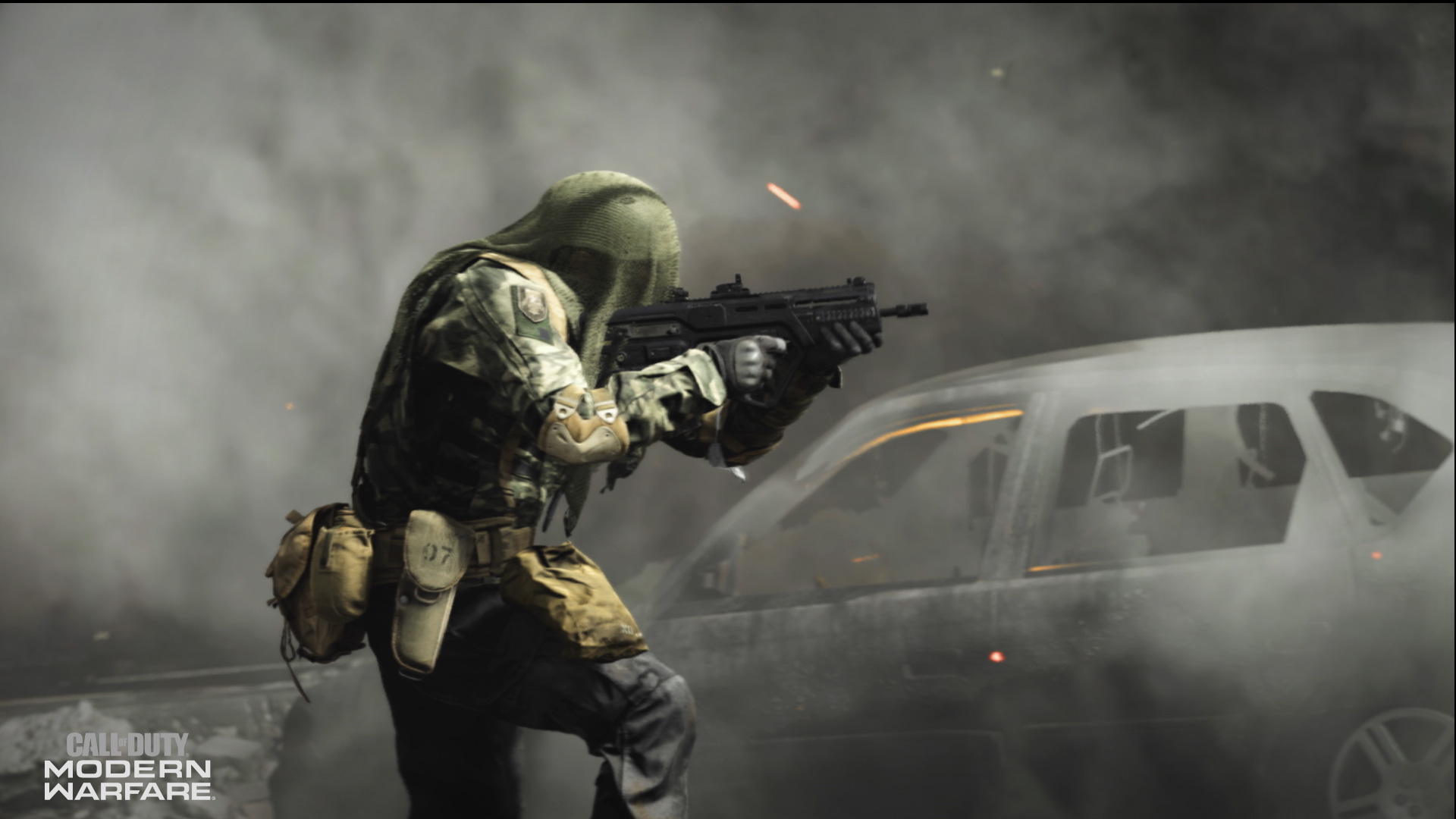 This thermal optic will help you see through smoke grenades and low-light conditions, which can be helpful in objective game modes and night maps. Although the built-in zoom might not pair well with the fast-firing RAM-7, the thermal benefits of this optic can make a strong enough case for any loadout.

Like other assault rifles, the RAM-7 can be converted into a burst fire weapon. Given its damage profile, you may need to hit an enemy with two full bursts to take them down at any range. While burst fire may be slightly slower than fully-automatic, the built-in recoil control could help you take down targets better at range. 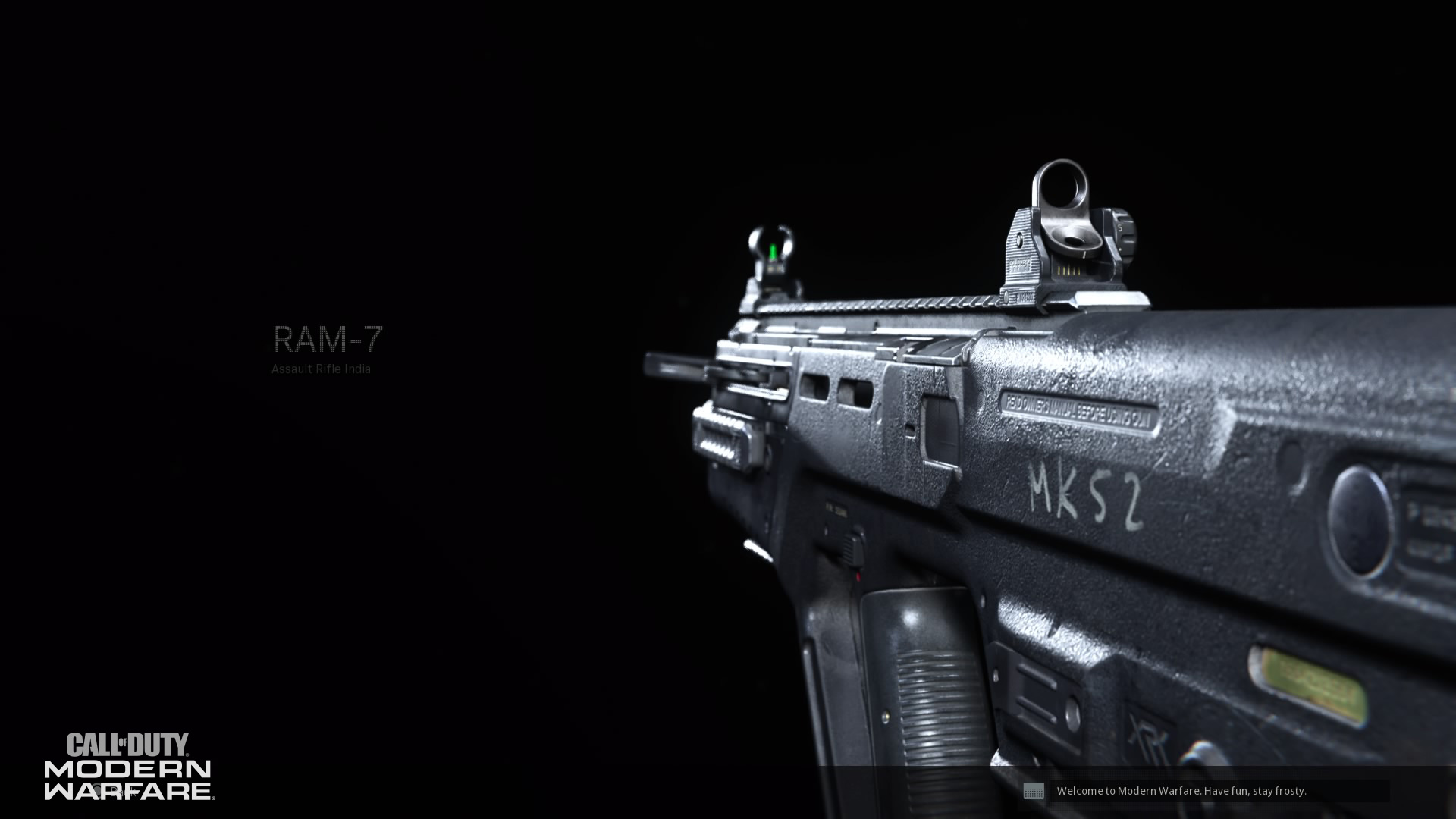 The final muzzle attachment you’ll unlock adds a few meters of range to the RAM-7’s four-shot takedown capabilities while also silencing it.

One of the last attachments to unlock on the RAM-7 can be yours from the start through the Corrupter blueprint.

No matter if you decide to test out the Corrupter Blueprint or are convinced to turn this weapon Gold, we hope you enjoy the RAM-7 as part of the Season One Battle Pass.