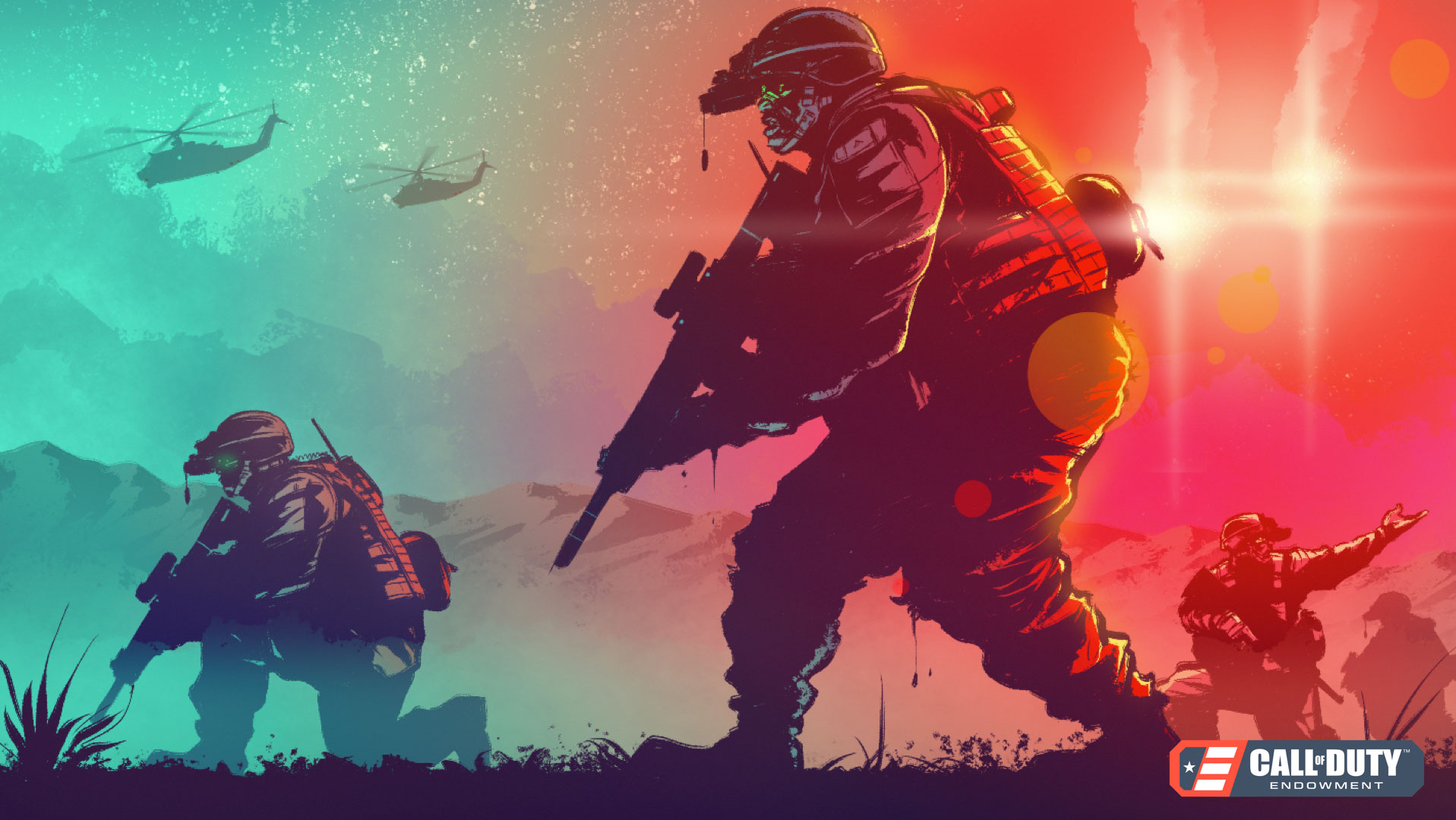 The mission of Call of Duty™ Endowment is to give back to the back men and women that have served in the military by helping them transition to civilian life via placing them in high-quality jobs. Today, July 16, we are excited to announce new content drops, allowing you to support veterans in two different ways:

If you live in the United States or United Kingdom, you can support veterans today by picking up the new Call of Duty®: Black Ops 4 – C.O.D.E. Jump Pack, first on PlayStation® 4, with other formats to follow. This pack includes a special wingsuit, parachute, and trail. 100% of proceeds received by Activision for this pack will go directly to funding nonprofits that place veterans into high-quality jobs. Support vets and purchase your pack today from the Features section of the Black Ops 4 Store!

We are also partnering with Marine Corps veteran, writer, and artist Max Uriarte to debut the all-new “Night Raid” PlayStation 4 theme (image above). All proceeds from the sale of the Night Raid theme go directly to the Call of Duty Endowment to help fulfill its mission. Answer the call on your PlayStation 4 by going to 'Settings', 'Themes', 'Select Theme', and choose 'Night Raid - Dynamic Theme' to equip this unique theme today.

Choose to purchase the theme for $2.99 / £2.50 with options to donate more for those in the U.S.; all purchase the same theme, but options exist for varying levels of desired support to the charity.

The Activision Games Blog recently had a chance to sync up with Max and talk about the Night Raid theme, his passion for photography and art (including the popular Terminal Lance comic series), as well as his personal journey both in and out of the Marine Corp -- and how that informs his creative endeavors.

Activision Games Blog (AGB): Thank you for your service in the Marines. Can you tell us about your that experience?

Max Uriarte (MU): Thank you! I enlisted in 2006 as an 0351 Infantry Assaultman, I ended up getting stationed with 3rd Battalion, 3rd Marines in Hawaii where I got deployed to Iraq twice between 2007 and 2009. In Iraq, I was operating as a turret gunner the first time out of Camp Fallujah in the Zaidon region and then as a combat photographer out of al Asad air base in 2009.

AGB: How did you initially get involved with the Call of Duty Endowment and what do you think about their work?

MU: A friend of mine at We Are The Mighty reached out to let me know that the Call of Duty Endowment was looking for a veteran artist to do a project, so he connected us by forwarding my portfolio over and they contacted me about the project. I was so excited to work with them! Not only am I a big Call of Duty fan and gamer, but the work the Call of Duty Endowment does is great for the veteran community and I was happy to be involved in any way I could be. I’ve been playing Call of Duty for many years. In fact, I recall returning home from my first deployment to Iraq in 2008 and one of the first things I did was buy a PlayStation 3 and Call of Duty 4 Modern Warfare.

AGB: What was your inspiration for the Night Raid theme?

MU: As a theme for PlayStation 4, I wanted to do something that invoked a mood much like some of the best moments in the Call of Duty games. I wanted to capture that feeling of anticipation at the moment the flares light up and the Marines get ready to assault.

AGB: The use of color in Night Raid is particularly striking. How did you pick those colors? And what techniques went into the creation of the Night Raid design?

MU: I was given a mood board of a color palette from the art directors for a rough idea of what they wanted to see. Color is kind of a new world for me and I’ve been really getting into it as an artist!

My first pass was actually more of a stylized neon approach, but we toned it down to something colorful but more realist. As a former combat photographer and currently Combat Artist, I always like the contrast of beautiful scenery and Marines. In Iraq, I recall there being a lot of moments of beauty. In every Marine’s photo collection, you’ll find sunsets and other quiet, beautiful times that stood out in the chaos of being there. Lately, I’ve been really inspired by natural gradients like you see in sunsets, and I’ve been trying to work gradients into a lot of my work.

AGB: This theme has a decidedly different look than your beloved comic, Terminal Lance. How did you like changing things up?

MU: Terminal Lance definitely has a decidedly more cartoony look to it, which is intentional to the semi-fantastical and ridiculous tones the comic takes. I just finished a new graphic novel called Battle Born: Lapis Lazuli, which also takes a decidedly more realist approach to the artwork and is also in full color. This illustration was done very similarly to the look of that book. I don’t really think one approach is better than the other—good cartooning is harder to do than people give it credit for. I try to stay well rounded as an artist though and I enjoy doing more realist work when I can.

AGB: Terminal Lance is going strong, you have an Omnibus of the comic, and we recently read that you’re hard at work on a new graphic novel — you’re certainly busy! How are you balancing art and life?

MU: Art is life! Or life is art? If I have a title, it is simply an artist. I see art everywhere and everything I do informs the next thing in some way. Art is about reaching deep down and expressing yourself on a canvas, or whatever medium you use. When I’m not sketching or writing or running Terminal Lance, I’m always trying to keep my artistic eye sharp by doing photography or watching other artists work. Otherwise I’m just enjoying life with my wife and dog in Santa Monica.

AGB: During your second deployment in 2009, you were active in combat art and photography. I want to focus on the first part. Can you talk a little bit about what combat art is?

MU: The Combat Art program is run by the National Museum of the Marine Corps. I have recently been designated an official Combat Artist with the museum, I was operating “unofficially” in Iraq in 2009. Combat Art is the act of capturing beauty in places you wouldn’t normally find it. It’s a tradition that goes back all the way to the Civil War, where it was a necessity due to a lack of cameras in existence. Nowadays it is a bit different and exists solely for the purpose of creating art on the battlefield.

AGB: How is combat art different from photography in terms of how it expresses the experience of being deployed and serving in a combat zone?

MU: I am also a photographer so this is something I have thought a lot about. When events are filtered through an artist’s eye, they capture things that maybe a camera does not, such as the feelings and emotion of the place or subjects. A photograph is objective—it shows reality. A sketch or a painting is subjective, it shows what the artist interpreted and what the artist saw that maybe no one else did (or could).

AGB: Do you have any further goals for the Night Raid theme in addition to supporting the Call of Duty Endowment?

MU: I just hope people like the theme! It was great working with the Call of Duty Endowment team with a lot of late night back and forth emails as we narrowed the look that we wanted down. As an art piece the theme really inspired me to push my use of color more and it’s something I’m looking forward to doing more of.

AGB: The Call of Duty Endowment has placed over 57,000 veterans thus far. Their new goal is placing 100,000 veterans into high quality jobs by 2024 — It’s an admirable goal and a good place to start for taking care of veterans when they return home. In addition to contributing to CODE, what can an average person do to help veterans transition back to civilian life?

MU: Don’t judge a veteran based on their previous life. For instance, if they were infantry, it does not mean they need to work security or be a police officer. The military (especially the infantry) is more than practical skills, it is a soul enriching experience in many ways that reaches deeper than any objective based education. Give them a shot. Trust their guts. They’ve seen and done a lot in a short amount of time.

My advice to veterans is to fully embrace being a civilian again. Do the best that you can at everything you do, or don’t bother doing it at all. You have a lot to offer the world, don’t push people away just because they’re not veterans. Don’t get stuck in your own world.

Thank you Max Uriarte – for your service and for taking the time to talk with us about your experience, career, and art! And be sure to check out Max’s Terminal Lance comic series HERE.